When I graduated from college in Minnesota, I moved from a single dorm room to my childhood bedroom in my parents' house in Michigan. Two months later, I moved into a big, sad apartment to work two jobs (neither of which I enjoyed) while I tried to figure out how to put my degree to use. The goal became the Air Force, and long story short (maybe I'll share one day), I didn't end up joining. Instead I moved yet again to Michigan's Upper Peninsula, to a tiny apartment in the middle of the woods. (I had fun with this apartment - my bathroom was bright yellow, my bedroom had an eggplant accent wall, and my kitchen/living room had blue accent walls). After an unfortunate series of events involving the church, a trip to Berlin, and the Navy (again, stories for another day), I moved back downstate and into an apartment that smelled weird and had ugly orange-yellow carpet. I finally found a job that was a perfect fit, and the following year, I moved in with a roommate to be closer to work. We lived together until the start of the pandemic. As the situation in the US grew worse, building differences led to me moving out on my own, to an apartment in a concrete jungle (I was one of 14 units in a building, that was one of 50 buildings in the complex). It was lonely and awful, and working from home during the disaster that was 2020 meant that my main social activity was going to the gym. So three months later, I took a trip to Nashville to clear my head and the rest is history.

By the way, if you were counting, that's seven moves. SEVEN. Since December 2015.

When my position went fully remote and I knew the move to Nashville was my new reality, I decided I needed to find a place I could see myself for a few years. I toured several different apartments on my second trip down over the summer, and landed in a beautiful building on the city's West Side. It's a short Uber downtown, a 4-mile run to the pedestrian bridge, has a great gym, and is in close proximity to several neat cafes, breweries, and shopping centers. The location is great. And despite the faulty fire alarms and a few burst pipes (other apartment complexes had it worse), I can't complain. Until I save up for a condo or house, this is home.

That said, I've had a lot of fun putting this apartment together. I had to do some creative rearranging with my sectional couch (the Nashville apartment is much smaller than my previous one), and sold off my dining room table and chairs along with that vibrant green armchair before moving here. But aside from a few wall decorations I have yet to purchase, I think it's pretty much finished. It's home. I'm home. 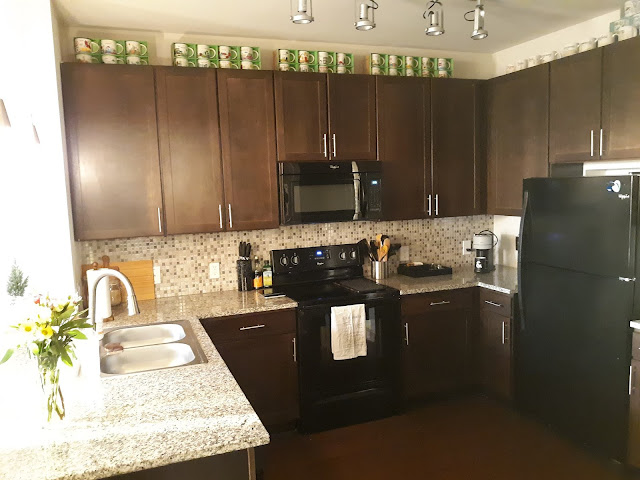 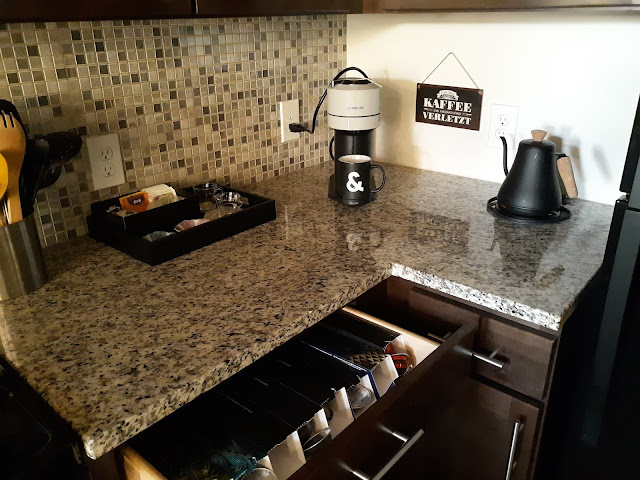 Directly through the front door is the kitchen: dark cupboards, a beautiful countertop, tiled backsplash, and black appliances. I decided to make use of the space above the cupboards to display my Starbucks You Are Here Collection mugs, and even created a cute coffee nook featuring my Nespresso machine. I spend a lot of time in this kitchen, whether sitting at the counter working, cooking, or pouring some vino with friends. It was a huge selling point of the apartment as previous kitchens have been outdated, galley-style, or just plain dingy.

Through the kitchen is the living room, which serves as a dining room, hangout space, and office. This room gets an incredible amount of natural light, which I absolutely love (these photos were all taken at sunrise). I tried to keep with the theme of industrial accents/neutral tones, only bringing in color with plants, books, and a few prints from IKEA. Nearly all of my furniture is from Wayfair (couch, bar stools, desk, TV table, bookshelf), with the only exception being my desk chair (which believe it or not was a Walmart find). Couch pillows and a throw blanket from Kohl's, an ottoman tray found at TJ Maxx, and my little black mandolin all pull this space together atop a cozy Scandy rug from Target. 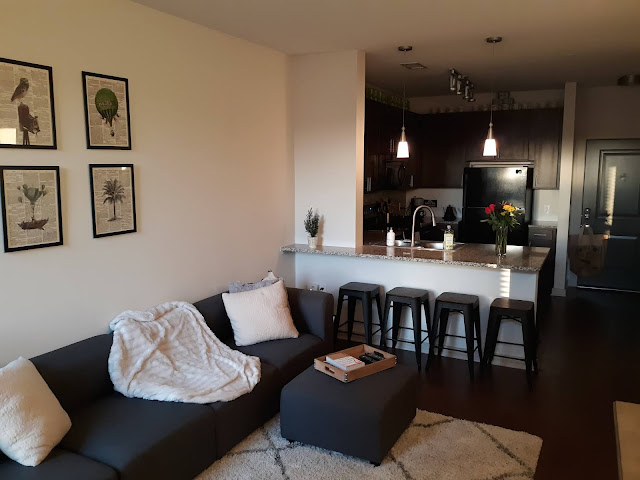 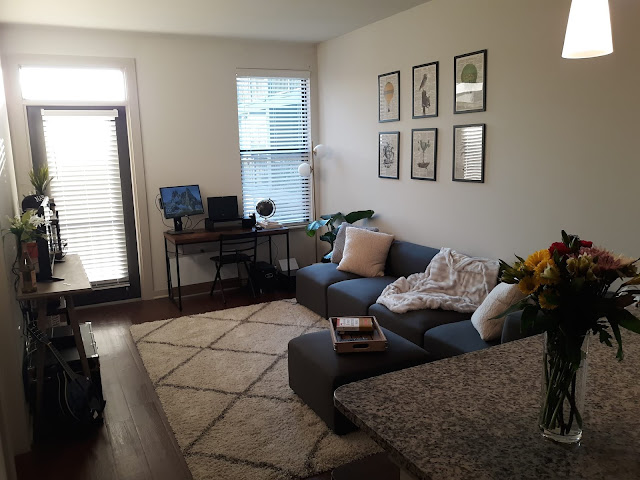 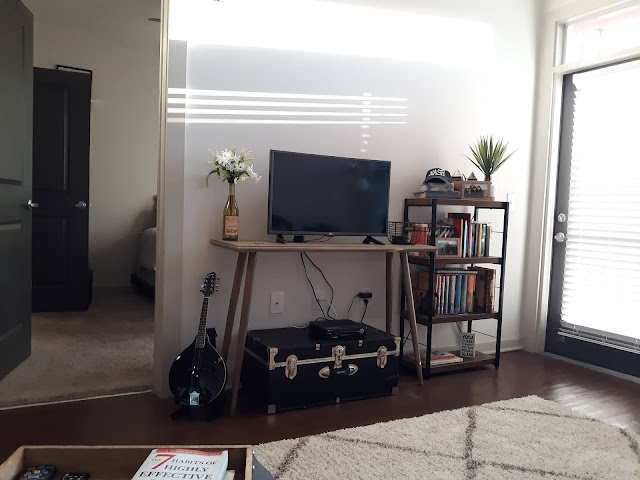 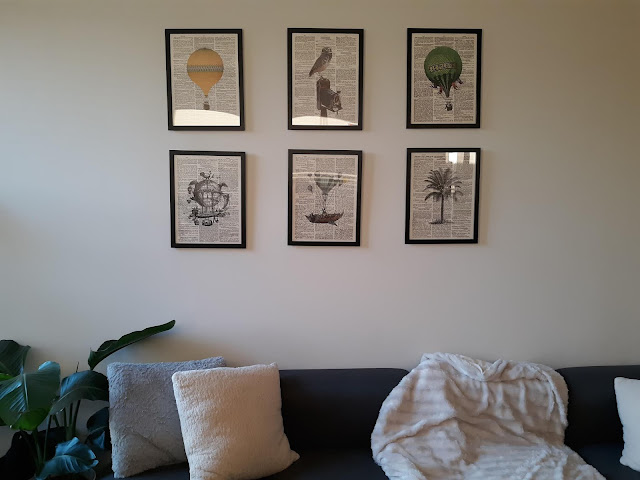 A close-up look at "the office": 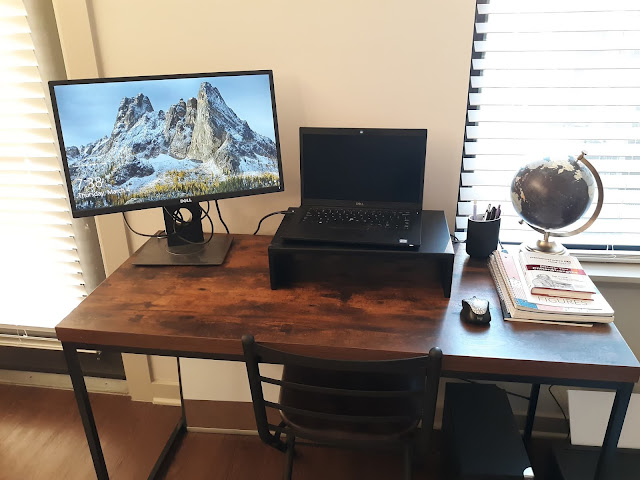 Outside, I have a small balcony that overlooks one of the two courtyards at my complex. It's beautiful at night when they turn on the fairy lights, which hang from one side to the other. There are fireplaces and barbeques, ping pong tables, couches, and even corn hole for the residents here.
Back inside, the bedroom is just to the left of the living room. It's a smaller space, so I brought in both my circle mirror and the rectangle mirror to make the room look bigger. The neutral tones come in via a black accent pillow, a mango wood side table, and a few typewriter prints from IKEA, as well as the extra couch section tucked in the corner for a spot to read. My favorite part of the bedroom is the mid-century modern entertainment center (again, Wayfair), on which I have my chunky little Magnavox and all of my jewelry. The necklace stand is actually a Hearth and Home (Target) towel rack, and the beautiful wooden jewelry box was a gift. It was hand-carved by one of my former French tutoring students' fathers, and she gave it to me after my college graduation. The bedroom is cozy and cohesive, though I might eventually add something above the bed or get a headboard. TBD. 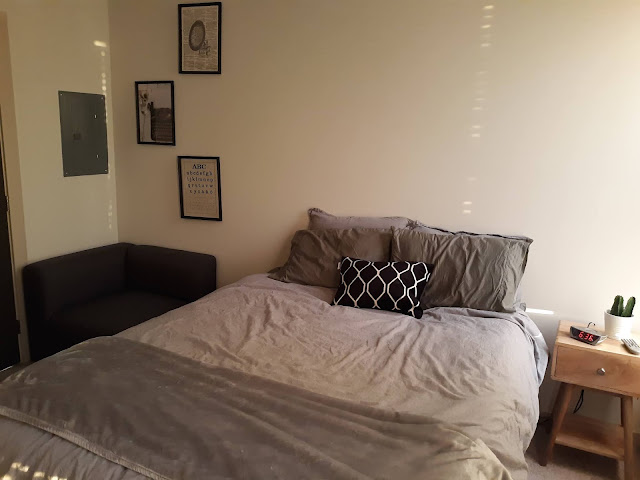 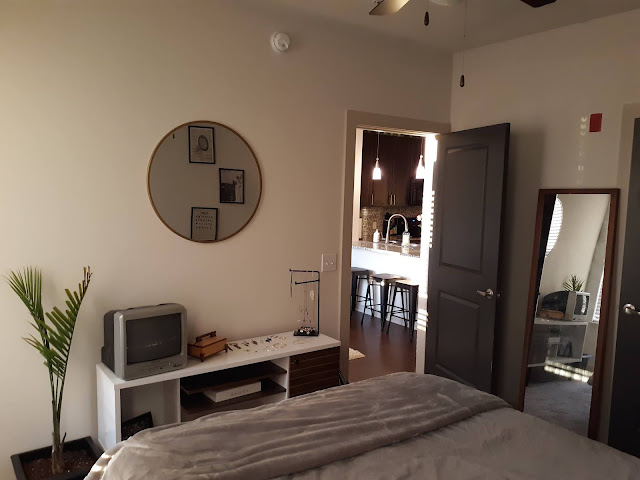 Through the bedroom is the bathroom, which is also accessible through the kitchen. The glass shower is a first for me, and while I do miss having a bathtub (and those Lush bath bombs!), it feels so much more modern and bright than a bathroom with a standard curtain shower. I recently added the pink accents, which is the first time I've ever given into truly girly decorating, and I'm pretty happy with how it turned out. 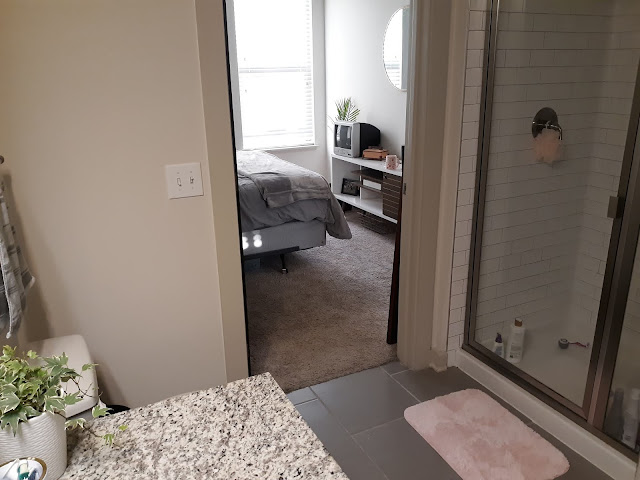 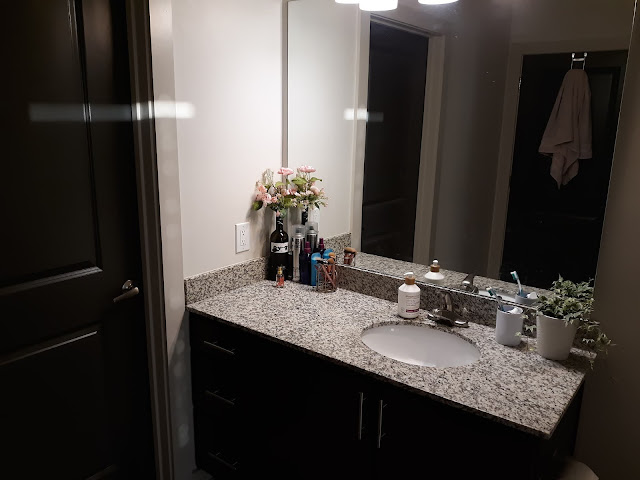 And continuing through the bathroom, we have the closet. Yes, its a little messy. Yes, I rainbow-sort the small amount of colored clothing I have: 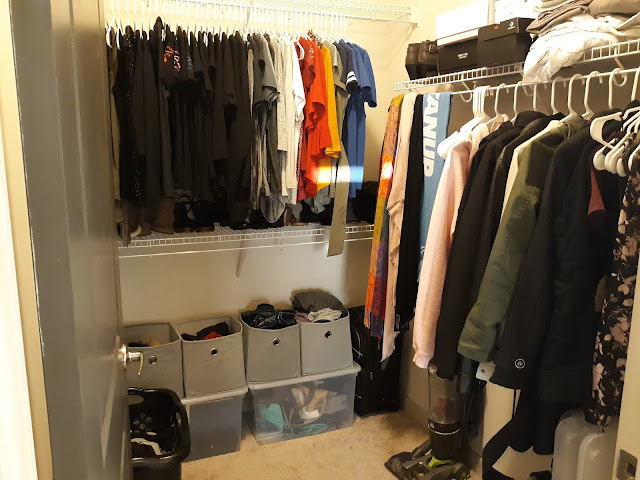 A final spot that I'm very thankful for in this apartment is the laundry closet. In previous apartments, I've had communal laundry, basement (a.k.a. dungeon) laundry, and laundry in a completely separate building. In fact the only times I've had laundry in-unit was the summer I spent three months in Portland and again when I shared an apartment with my roommate. The laundry closet is located just off of the kitchen, so despite being a bit loud when it runs, it honestly feels like a luxury (yes, laundry feels like a luxury). 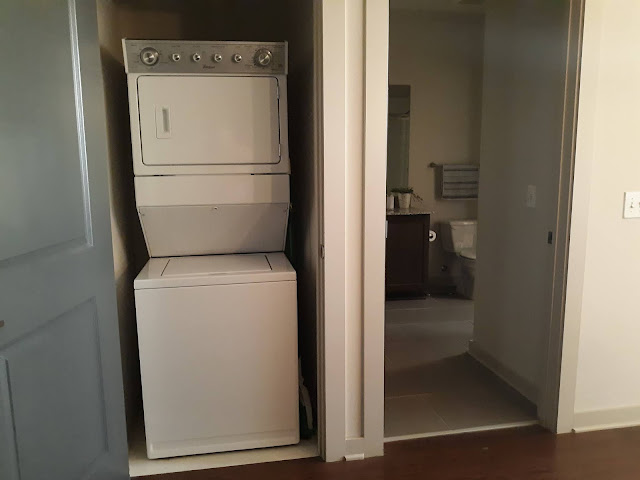 *  *  *
Nashville is an amazing city. To live here is a dream, and I've had a lot of fun making this apartment my home. It's a great feeling, to be "settling in" to a new city after moving once, sometimes twice, every year. I spend a lot of time here with working remotely, so I wanted to make it somewhere I love to be. And I do!
at March 05, 2021