Happy New Year! I hope your 2020 is off to a great start. I'm finally sitting down to write, and realizing how difficult it is to condense such a full experience into just three posts (well, Madrid will be three, Barcelona will be two.) There's so much I can say about Spain!

If I thought my first day in Madrid had been an adventure, it was nothing compared to what I experienced over the days that followed. The part of me that lights up when thrown into a totally foreign place had sparked, and I felt that familiar buzz of excitement from Berlin, from Athens, Dublin, Paris, Salzburg...that elated feeling of being so out of your element that it doesn't even seem real. Yet there I was, waking up in the AirBnb ready for a few more days in Madrid. As I fully woke up, I heard a woman and her kids were shouting in the street below my window. The other AirBnb-ers were stirring. Somewhere a car horn honked and more shouts from the streets. The sun was fighting to shine through my window. It took a few minutes before everything sank in as real; the city already seemed too good and too full of life to be true.

I started with coffee at a little brunch place near the Museo de la Reina Sofia, doing my best to remember the way from my outing with Javi and Miguel the night before. It fueled a morning exploring the Museo, even climbing up to the Terraza overlooking the city. I tried to remember everything that Javi had told me the night before - the inner-workings of the building and how the museum's roof came within inches of the roof that hovered just above it, designed so intricately as to allow air to come in but keep rainwater out. Inside, there were several floors of exhibits, and I wandered through one about the life and mission of Delphine Seyring. She apparently had a very heavy feminist influence in French films in the 80s. It was so interesting! 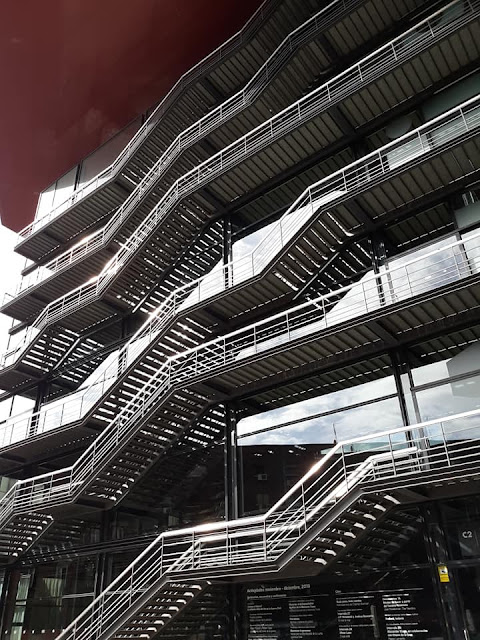 Afterwards, I decided to find food and head towards Plaza del Sol, so I headed back past the AirBnb and off in the other direction. I found a colorful little place called "El Libre" with bright walls and mismatched furniture, and spent some time writing while I enjoyed avocado toast, roasted tomatoes, and incredible homemade bread. I even had a brief conversation with a group of students learning English, who were as thrilled to meet a native speaker as I was to meet them.

It's something I've really grown to love and appreciate about big cities. Whether in Austin, New York, or Chicago here in the States or somewhere like Madrid or Athens, people always seem open to getting to know newcomers in coffee shops. In my experience, it's something you just don't find in small towns and certainly not in the suburbs. People tend to keep to themselves, or is it just me? 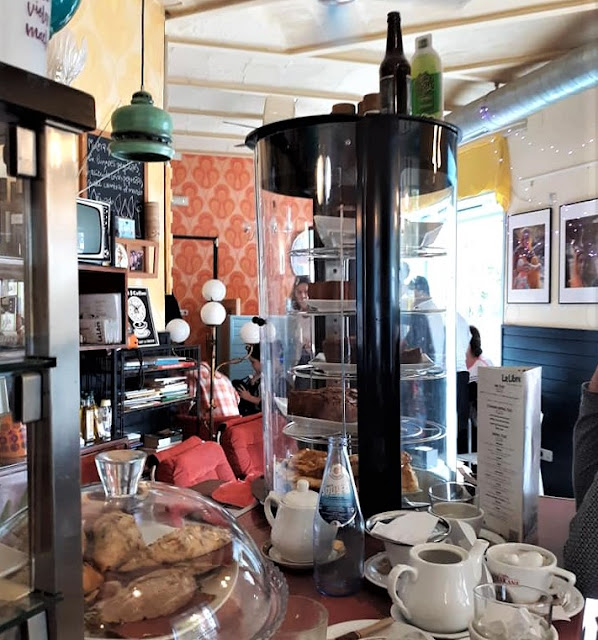 From El Libre, I admittedly got lost for a bit and ended up at the southernmost part of the city, but was set straight by a young couple and their two kids. I explored Mercado San Fernando, where I met another Miguel who wanted to have a long conversation with "an American" about Chicago, then wandered through the bustling Plaza Mayor. Stores, people in costumes, sculptures, shoppers, people speaking every language, and wafting smells came from every direction - it was incredible.

I found Mercado San Miguel on the other side of Plaza Mayor, similar to the Mercado San Fernando but much bigger with many more food and drink stalls. It had been on my "must-see" list for Madrid, and it was obvious to see why. The glass counters showed every kind of tapas imaginable - fried seafood, mini margarita pizza rolls, tiny toasts, little plates of olives and sardines, you get the idea - and the smells coming from the stalls got better and better as I made my way inside. It was so overwhelming; I made a note to come back and decided to continue on to Puerta del Sol instead. 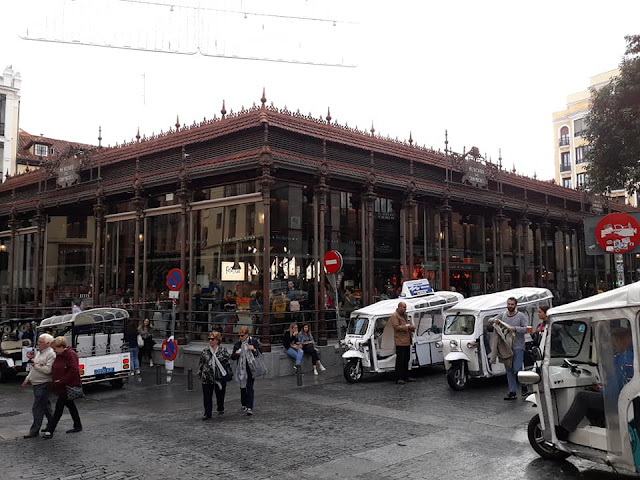 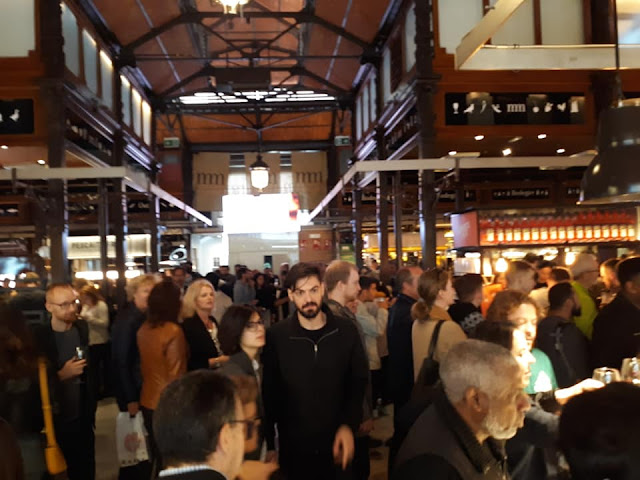 Puerta del Sol was a much larger, more chaotic version of Plaza Mayor. There were more crowds, more street performers, more costume figures, and statues of the Mariblanca and of King Carlos III, as well as the more famous "Oso y el Madroño" (a bear with a strawberry tree). Children were running to and fro, and apparently it's custom to rub the heel of the bear, because the paint had rubbed off completely, revealing the goldish-bronze color of the statue. 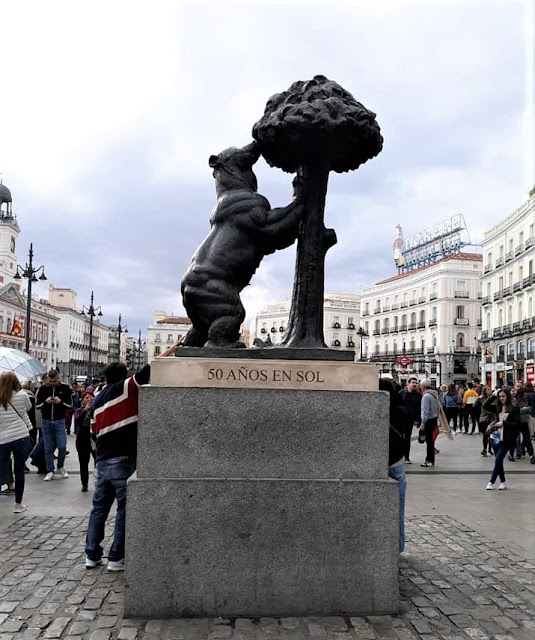 I popped in and out of shops, and Madrid just grew busier and busier with each new place I went. I walked along Gran Via, something of a mix between The Magnificent Mile of Chicago and New York's Fifth Avenue. Stores like Zara, Tous, and Primark were swarmed with people and there were street performers building towers (human towers!) in the middle of the streets. I was starting to feel tired from all the walking I'd done, and decided to head back towards Atocha to find something for dinner. I passed so many places along the way that I'd noted on my "must-see" list: Edificio Metropolis, the Circulo de Belles Artes, the Plaza de Cibeles, and even past the Museo Naval. I wound up at a place called La Rollerie on Atocha, a nice but casual place with white, wooden chairs and bottles of olive oil decorating the tables. I ordered una rioja (a type of red wine) and a tropical prawn (shrimp) salad. I asked the waiter for recommendations as I planned out what to do in subsequent days, and we talked for awhile of the best spots in Madrid.

I stopped in and out of a few other places on my way home, including a tavern-style restaurant and wine bar called Mas al Sur. It was right down the street from my AirBnb, so I thought it would be a great spot to end the day. I had another rioja and to my surprise, the man sitting next to me at the bar was another American. His name was Max, and he lived a few hours outside of Madrid teaching English. He was originally from Philadelphia, working in a small village in Spain, and decided to visit the city for the weekend. We talked for some time, discussing our plans for the weekend, and when I mentioned the next day's plan to go to El Sobrino de Botin (supposedly the world's oldest restaurant and a popular spot for Hemingway back in the day), he decided to join. We decided on a time to meet the next day, then said our good-byes and headed out. 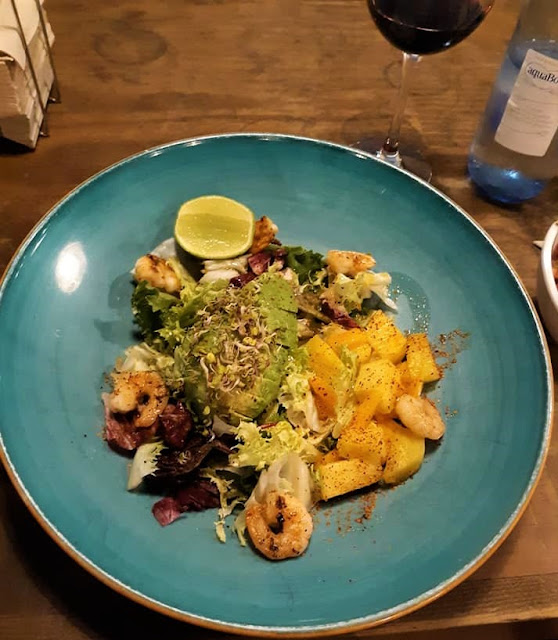 After Mas al Sur, I made it home and fell asleep instantly. It wasn't until 4:30 in the morning that I realized how awful I was feeling, and woke up with a terrible cough and sore throat. I could hardly swallow and had a massive headache, so it took some time before I fell asleep again. Maybe it was just exhaustion, maybe it was allergies to all of the smoke from people in the streets. Whatever it was, I certainly hoped it would be gone in the morning. I still had over a week to go in Spain. Including my first trip ever to Barcelona!
at January 02, 2020