And so another adventure began.


When I started my new career back in March, I knew that I'd be working with our international clients. From the start, there was a part of me that hoped the position would involve some sort of travel - anywhere, frankly - and I was so excited when I found out it would be a possibility within the first year. But I never thought that I'd actually be planning a trip just a few months later - to Spain, of all places. As a major aspect of my job is working closely with manufacturing facilities, part of the first year expectation is that new employees will do a "Shadow Audit" - a trip to accompany an auditor on a three-day audit of one of their clients.

After many meetings with my manager and several hours spent working out how I could stay on budget, it was decided that I would go to Barcelona for my shadow audit in November. The following months flew by, full of planning and excitement and high hopes that everything would work out. I decided to take PTO on the days surrounding the audit so that I could take full advantage of the trip to Spain (my first), visiting Madrid in addition to Barcelona. I'd wanted to visit Madrid since 2014, when I worked in the office in Dublin with other interns from all over the globe (one of which was a gal from Madrid). We'd gotten to be friends, and after having visited other interns in both Ohlstadt, Germany and Salzburg, Austria, Madrid was on my list. Things were going quite well until just two weeks before the audit, when I started seeing the news stories; Barcelona was facing political riots and everything from Molotov cocktails to rubber bullets were being exchanged between law enforcement and rioters. What had started as a peaceful protest by the Catalonian separatists had evolved into a political disaster. Surely the Shadow Audit is going to be cancelled with all that going on. It was nearing mid-October and my flight to Madrid was on the 30th. I would spend five days there, then take a train to Barcelona for the audit. I waited for the cancellation email from our auditing team, but it never came.

With some luck, the riots subsided just days before the trip. Before I knew it, I was loading my bag into Uber Driver Sonny's car and on my way to the airport. The excitement of walking into an airport - something I'd already done three times over the summer - seriously never gets old! Security moved quickly, and at 4:35pm I was boarding the plane. I was on my way to Spain!

The flight was nearly eight hours long, and after a short layover in Amsterdam (note to self: come back and visit), the plane landed in Madrid. It was 10:00am by the time I'd navigated to ground transportation, soon climbing into another Uber on the way to my Airbnb. I asked the driver to drop me off at a little bookshop-cafe called La Fugitiva, which was right around the corner from where I'd be staying, then watched in awe as the buildings grew taller and streets grew narrower the closer we got. Madrid had a very Diagon Alley-like feel to it, with shop titles in gold lettering above faded awnings, bakeries left and right, and bookstores with titles stacked floor-to-ceiling against the dark windows. We pulled up to La Fugitiva, and I thanked the driver as I climbed out of the car. Inside the bookstore, I briefly looked around at the titles before buying a coffee and heading off to my Airbnb. The host met me at the heavy, iron front door and gave me a tour, a map, and a set of keys. As I looked around, I was so thankful I'd decided to stay there instead of a hotel. It was clean, but full of neat accents and knick-knacks. Car horns and street chatter could be heard from the street below, and plenty of natural light filled the space. I fell in love with the place instantly: 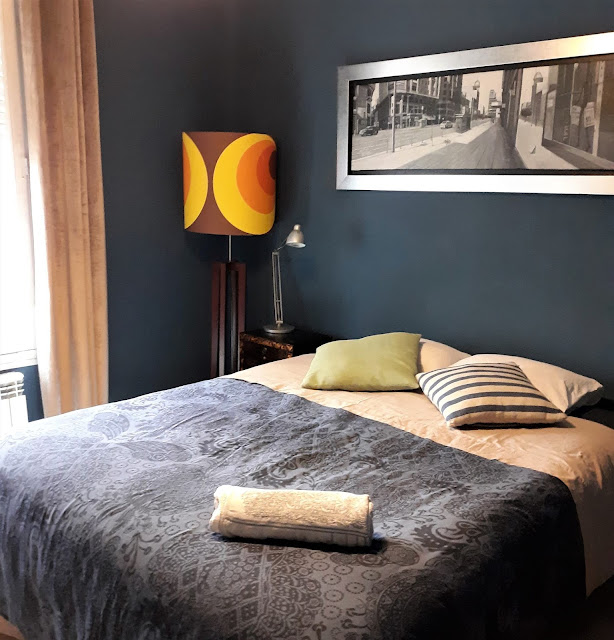 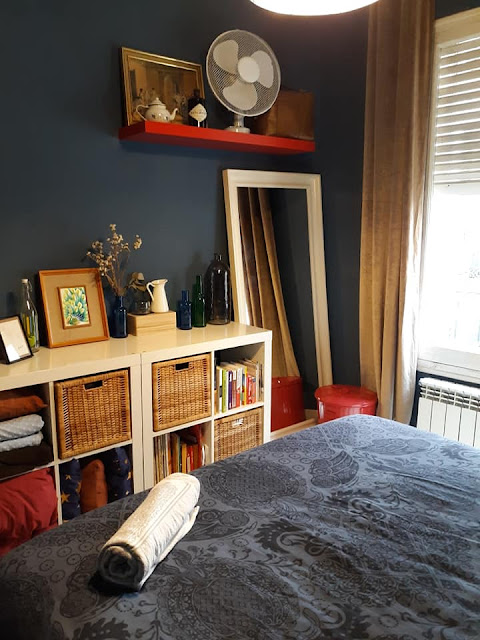 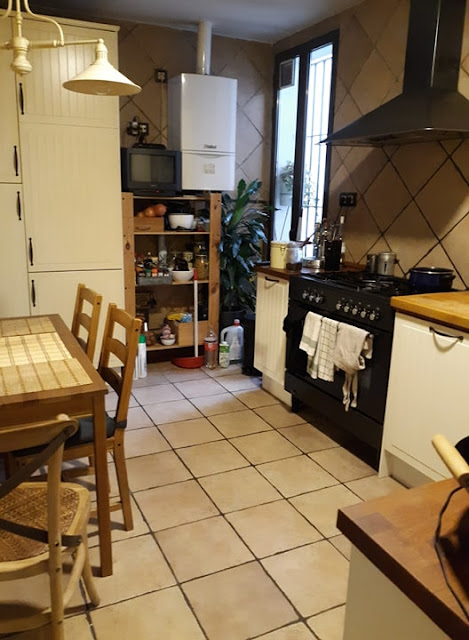 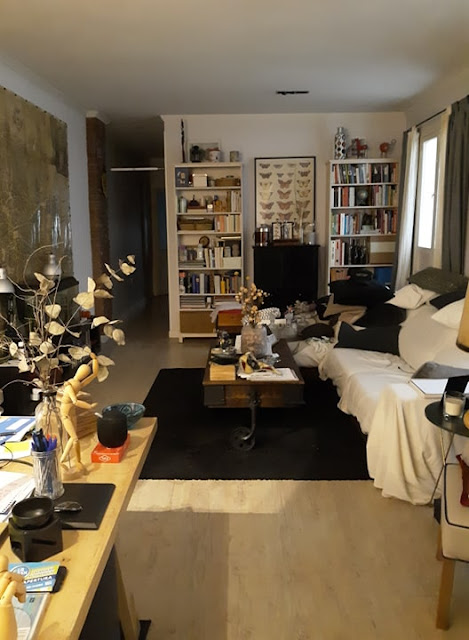 I didn't exactly have a plan for the first few hours in Madrid. As with most trips I've taken, I'd already picked out several places I wanted to visit (museums, cafes, restaurants, historical sights, cultural "hot spots", etc.) and would take a 'Hop On Hop Off" bus at some point to see if anything else sparked my interest. The only plan I had in mind for the first day was to meet with Javi, a friend of my German friend, Cleo's. When I first started planning the trip, Cleo thought she might be able to meet me in Madrid and told me she had a friend living there. They'd met during her year studying abroad in China, and she hadn't yet had the opportunity to visit him in Spain. Unfortunately, her university schedule didn't permit her to come, so I met with Javi instead. Why not?

After a few hours of roaming Madrid, Javi and I planned to meet in Plaza de la Independencia (thank goodness for free wifi and WhatsApp). We met shortly after 7:00pm and he greeted me with a hug. It was an odd feeling to be meeting someone for the very first time when you'd been told so much about them. From everything Cleo had said, and how well I know her, it almost felt like I knew him already too, by extension. Javi and I walked through the streets of Madrid, talking about Cleo and how we knew her, what we both did for work, his recommendations for me to see in Madrid (and the places to avoid), and some of the architectural marvels of the city. (I should've known architecture was a major focus of his - that's what Cleo had studied in China, too.) He pointed out an architectural museum made from an old car factory with a vertical garden in front and an entire support structure balancing on 3 points instead of 4 (which is significant in most buildings...apparently). I learned so much! 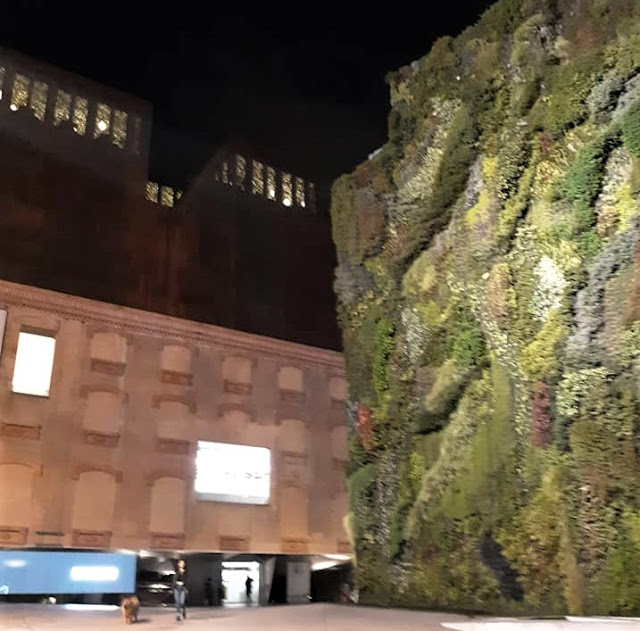 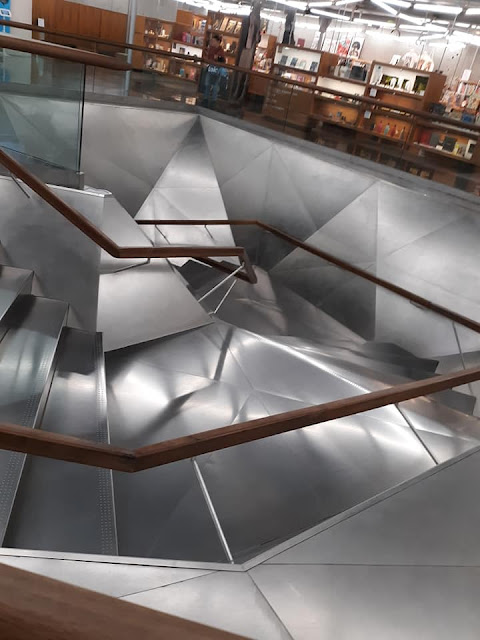 We met up with his friend Miguel at the Museo de la Reina Sofia, and Javi pointed out more architectural aspects of buildings as we went. The three of us decided to go for tapas, and found a place serving something called "Alhambra" beer. It was a special Spanish beer from southern Spain, and the guys insisted I try it. There was a special tapas menu that only cost €1,00 with the purchase of a beer, so we bought three and chose our tapas: a sort of fried eggplant covered in sweet honey sauce, some kind of fried fish bites, and huevos rotos con papas fritas - fried potatoes with eggs on top. The beer was crisp and refreshing, and the food was phenomenal. For my first tapas, it was above and beyond my expectations! 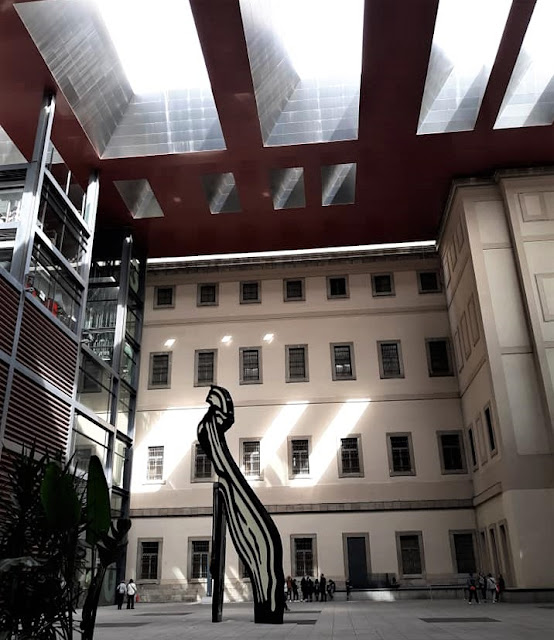 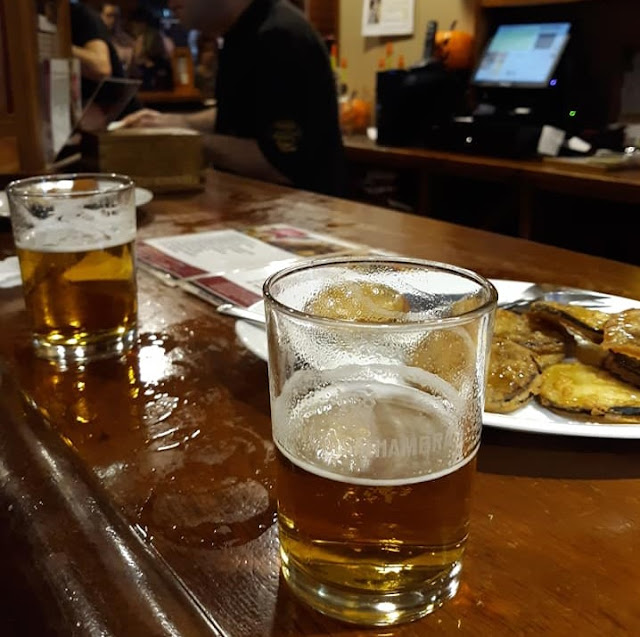 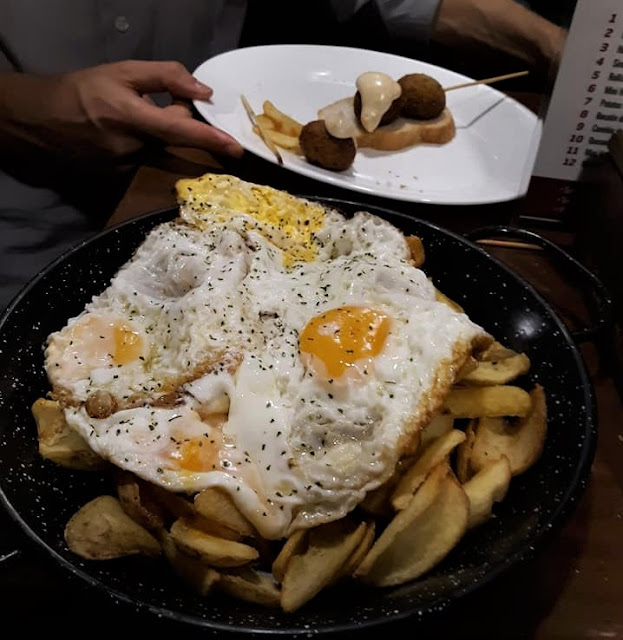 The more we ate and drank, the more animated our stories became. Javi told stories of his travels to Boston and Korea. I shared stories of Greece and Germany. We laughed, we joked, and while I thought we were being loud, it was nothing to the noise around us. We decided to head out once the place because too crowded, and walked through the rain until we found the metro. Miguel had somewhere to be, so we said good-bye and made our way to the platform. From wherever we were to Argüelles Station, I could feel my eyes growing heavier and heavier with each stop. It had been such a busy day, but Javi insisted there were still more friends to meet. When we got to their station, two tall, thin boys with dark, curly hair and skeleton makeup greeted us. I had to do a double-take: they were wearing white contacts, which looked incredibly creepy and popped out given the amount of black eye makeup they were wearing. The two were getting ready for a Halloween party ("...or a Todos los Santos party, or a Dia de los Muertos party," they told me - it didn't seem to matter which) and tried to convince Javi and me to accompany them. We stayed at their apartment for a short while, watching as they added makeup and smoked hand-rolled cigarettes, but were just too tired to go with them to the party. When they left, we headed with them to go back to the metro.

The two Skeleton boys got off a few stations ahead of Javi, and when it was his turn to leave we hugged good-bye. The entire evening had been such a blur (and not just because of the Alhambra). I was so exhausted by the time I reached my station, I'd forgotten the directions Javi had given me to find the Airbnb. In fact, I had to stop into a Carrefour (a small grocery store) for wifi, and looked up directions on my phone. Just as I pulled up the map, my brother video called me from Michigan. He and his wife, their son, my sister and her family, and my parents were all together for Halloween, so I walked around the store talking to them as I picked up a few random groceries. Even though they were five hours behind and 3,943 miles away, I thought it was pretty neat that I could still wish them a Happy Halloween. Technology, how did we ever survive without you?

After we hung up, I took a screenshot of the map and easily found my way back to the Airbnb. As I walked, I saw several people with their faces painted like skeletons; some even dressed in black clothing with painted or sewn-on bones. They shouted to each other in Spanish, and I picked up a few "Vale!" and "Cerveza!"s from their slurs. It had been such a fun evening and the atmosphere in the streets as I walked home was just the cherry on top. I found the heavy, iron door in no time and made my way inside. Day one in Madrid: an absolute success. And I couldn't wait to see what the next several days would have in store!
at December 14, 2019