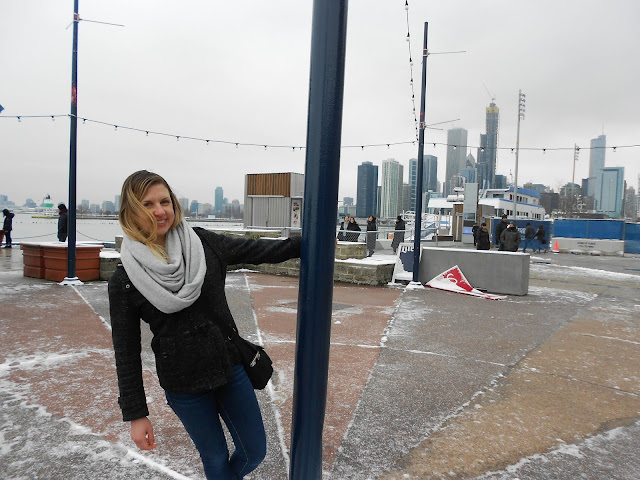 Happy New Year friends! Welcome to 2019, which I sense a lot of us are excited and more than ready for. It's strange: it seems as though most people I've talked to had a less-than-perfect 2018. I'd say mine was far from it, too. But what's past is past, right? So cheers to a new year, a new start, and a 'clean slate'. Cheers to 2019!

The past week (or two?) has been an absolute blur. From celebrating Christmas Eve and Christmas Day with both sides of my family to the small adventure that ensued before New Year's Eve, it's been a very eventful holiday season. John and I had talked about going to Chicago a few months ago, and were possibly going to squeeze a trip in mid-December. But then work and other things got in the way, and well...it took a seat on the backburner. Then all of a sudden it was the week before Christmas and we pulled the trigger: one quick trip to Chicago the last weekend of the year. John had to work on the 27th (the Thursday after Christmas) - from 4pm until midnight - and would drive down afterwards. (He lives nearly four hours north.) The plan was to have a lazy Friday morning and head out early afternoon. So imagine my surprise, when at 10:00pm Thursday evening I was sitting at my kitchen table and John appears at my apartment! What's more, he even came with beautiful pink roses and a bottle of my favorite wine in hand. Nevermind my wet hair (I'd just showered), pajamas, and not-yet-packed bags for Chicago (uff-da). The man surprised me good. 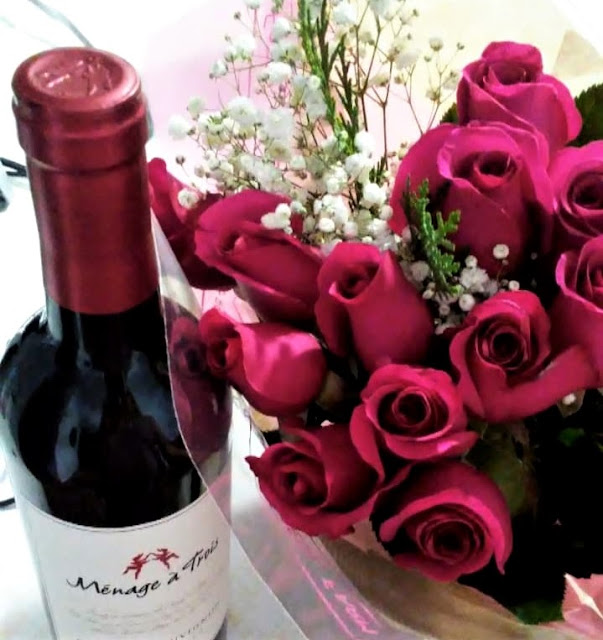 By 9:30 the next morning, we were on our way. Chicago is a 5(ish) hour drive from my apartment, and we pulled into our AirBNB by early afternoon. It was a beautiful townhouse in the northern part of the city, and we had a private room in a flat shared with other AirBNB-ers. It had an industrial modern vibe to it and was located less than 5 minutes from the Brown Line train. That first evening, we bought tickets to head downtown and do some exploring. It was freezing! We actually ran down the streets to cut the wind and found our way to the Off Color Brewing Taproom, called "The Mousetrap". It was phenomenal. We had some very unique brews including one called "Mint Dino-S'mores" which honestly tasted like melted mint chocolate chip ice cream. It was dangerously good. We met some locals there who gave us advice about what to see and what to pass, including that we should get drinks on the 96th floor of the Hancock building instead of paying to do the "Chicago 360 Experience". They were kind enough to even buy a round before we headed out to find dinner. The Yard House was a short walk away, and from the pita chips to the vegan burger, I was impressed in every way (not to mention the 100+ beers on tap). Seriously friends, check this place out next time you're in Chicago! 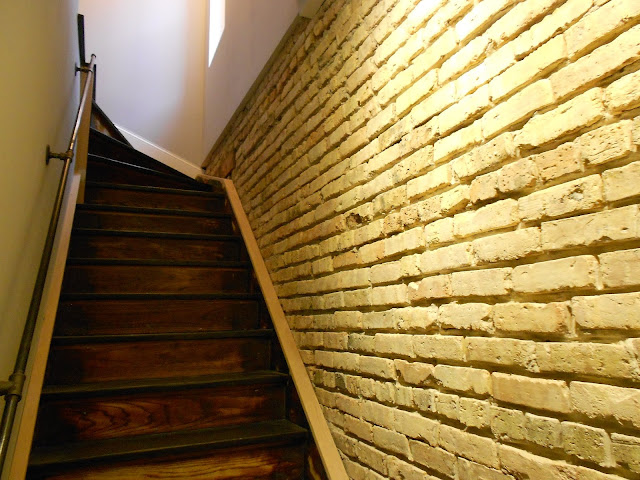 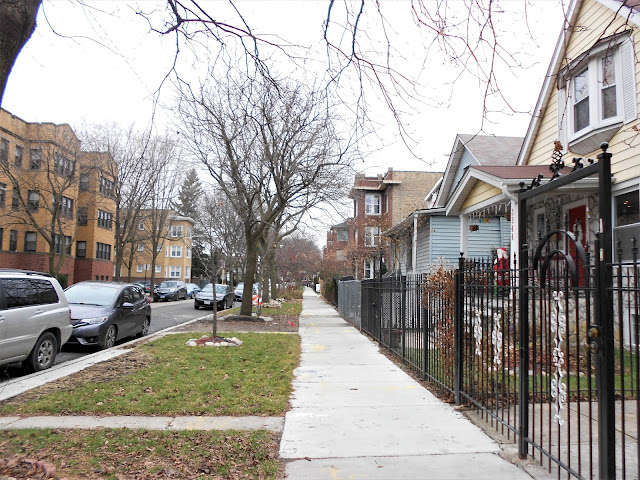 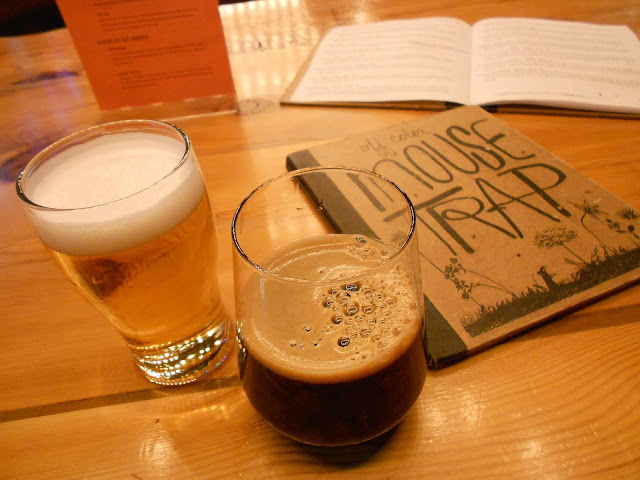 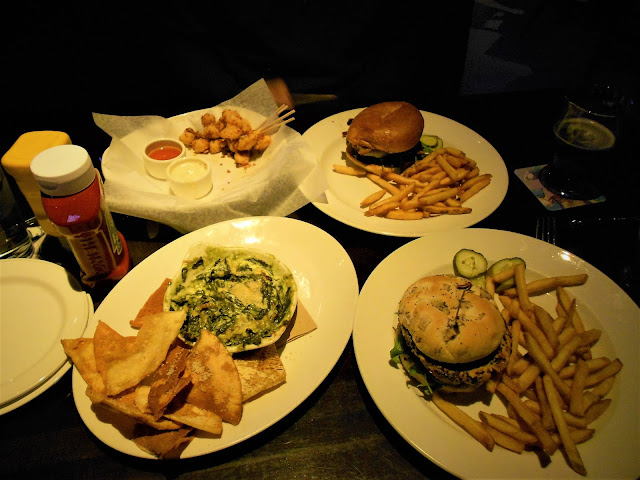 We finished the evening by walking back to the train station, so cold that we actually stopped at Target so John could buy a hat (and I could satisfy my "Target run" quota for the month...). It was an amazing first evening in Chicago. And it continued right into the next day. We took the Brown Line back into town and found brunch at a truly vibrant place called "Yolk". Apparently its a chain of restaurants serving up all kinds of 'huevos' and coffee. John got a skillet and I got a five egg white omelet (packed with avocado, mushrooms, and peppers...mmmmmmm), and even picked up a mug as a souvenir. It was the perfect start to the day. 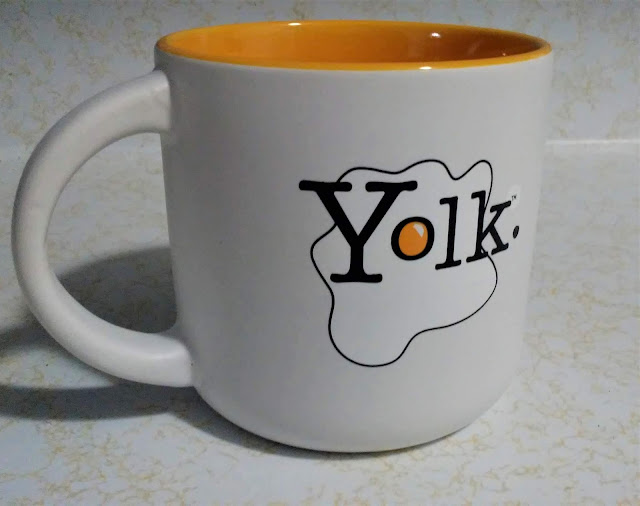 That afternoon we must've walked at least five miles. We found the Magnificent Mile, popped into Trader Joe's for snacks and the Disney store for memories. It was tempting to duck into the American Girl Place, but I'll just keep that on the list for next time (maybe on a girl's trip...not exactly a guys' first choice, I'm sure!). We headed towards Navy Pier, where we spent some time walking through the indoor shops, past food stalls, and finally out to the actual pier (taking some fun yoga pictures, of course). It was so empty and peaceful compared to the busy summer months! 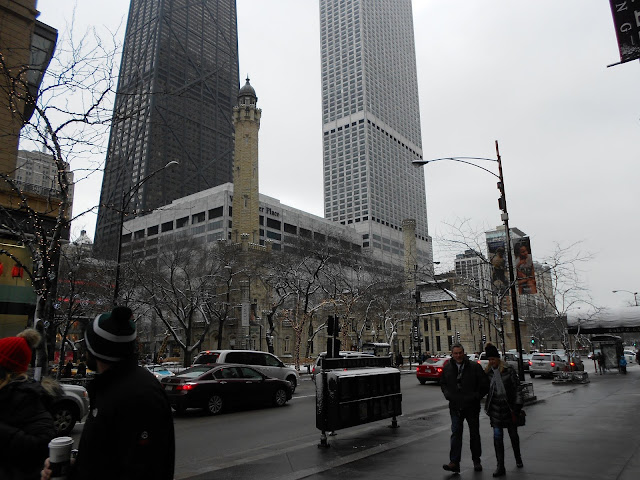 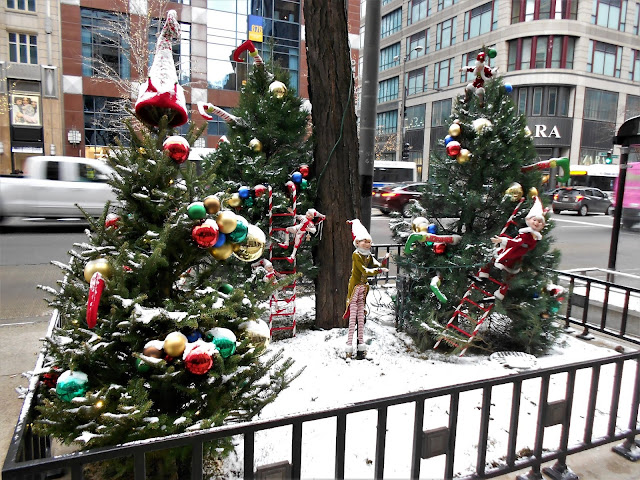 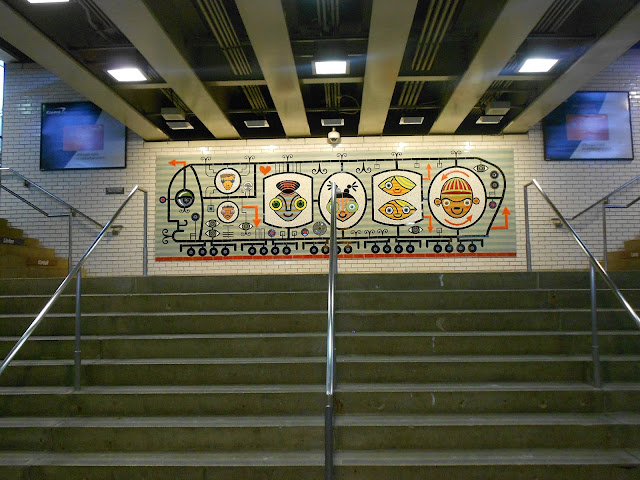 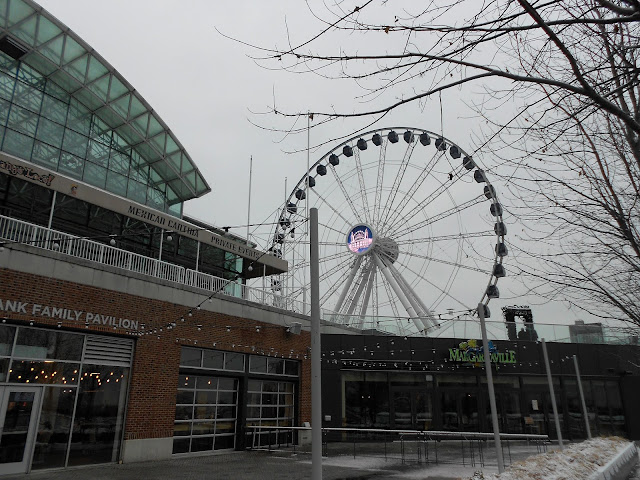 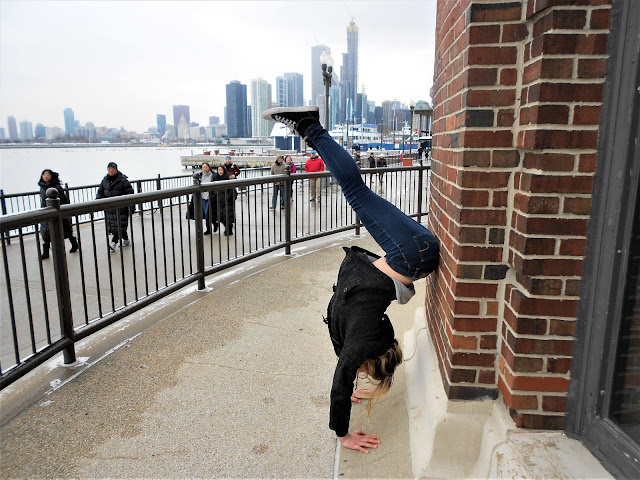 We had to take the train back to the AirBNB to get a new parking pass (ours from the day before expired after 24 hours) and relaxed for a bit before heading back downtown. The plan for the evening was to see Millenium Park (aka 'The Bean'), head to the Tavern at the Park for drinks (where we'd also change into our 'fancy clothes' that we'd packed, just for fun), then go to Giordano's for deep dish, Chicago-style pizza (mainly for John). So we did just that. I'll admit, it was pretty spectacular pulling my dress and heels out of John's backpack at the Tavern, changing in the bathroom, and spending the evening with him looking dashing in his shirt and tie. We certainly raised a few eyebrows (especially when we walked into the very crowded Giordano's around the corner), but it was completely worth it. 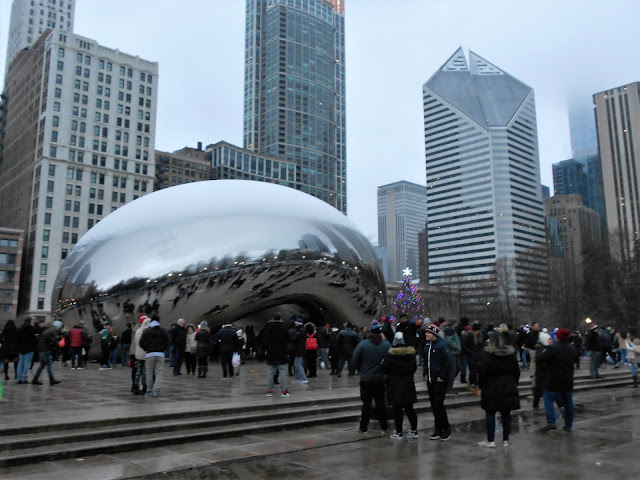 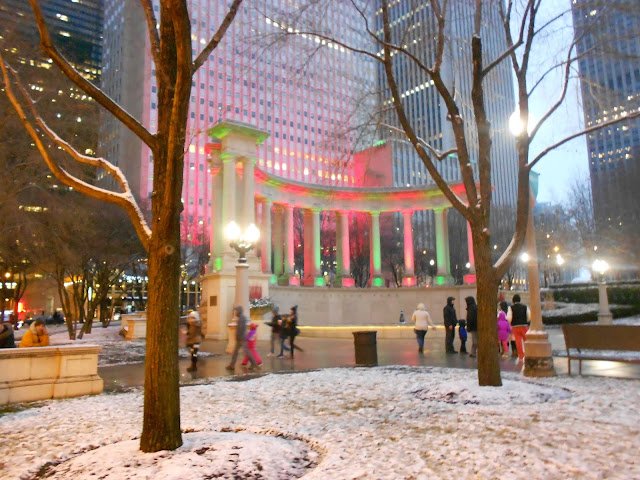 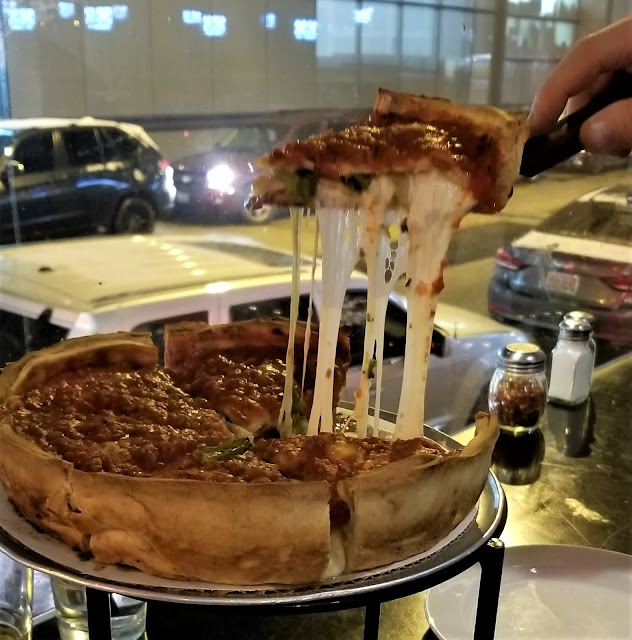 After dinner we made our way back to the train station, which was not the greatest in high heels and a dress in wet, slushy weather. Regardless, it was a great evening, and an excellent second day in Chicago. It was sad to think we were already leaving the next day but we planned plenty for the morning before we had to head home. We started the morning by packing up and checking out of the AirBNB, locking all of our things in John's car, and taking the train downtown. We found breakfast at a little place called "Pick Me Up Cafe", which was even brighter and more colorful than "Yolk". The walls were orange and purple. The railings were blue. The fairy lights along one wall were the leg lamp from A Christmas Story. And our table had a rainbow painting of Michigan on it (they were psychic apparently!). But even more impressive than the decor was the food. They had so many vegan options to choose from, not to mention loads of other breakfast and lunch options. John ordered Kahlua pancakes and I went with a Tofu scramble. We probably didn't need the hummus appetizer, but ohhhhh was it tasty. 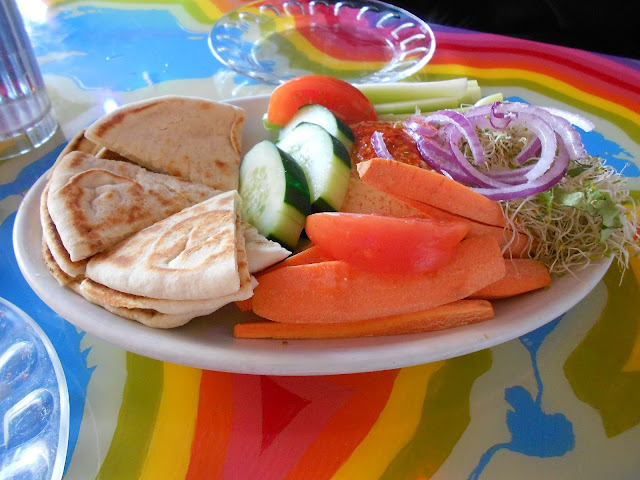 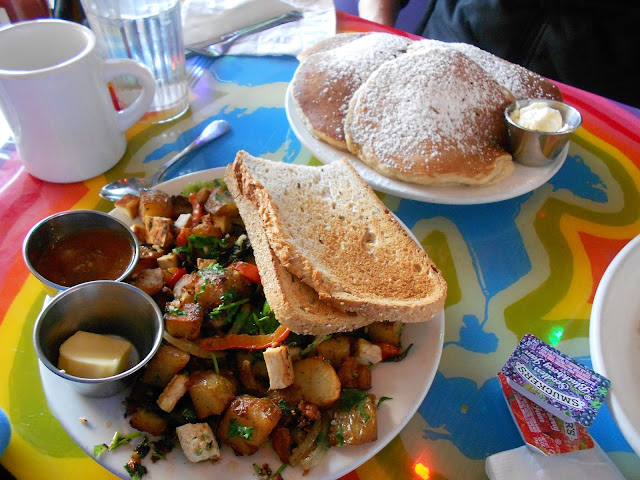 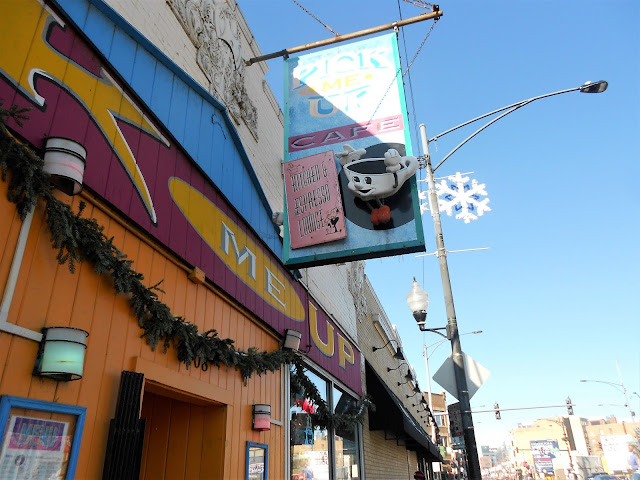 From "Pick Me Up Cafe" we took the train back towards the Magnificent Mile and made our way to the Hancock building. We planned to follow our 'friends' from the Off Color Brewing Company's advice: avoid the long line and high price and just view the city from the 96th floor with a cocktail. It was still a fairly long line, but everyone was in good spirits and it moved quickly. Before I knew it, we were huddled in the elevator with a dozen others. The Signature Lounge was incredibly busy, but we were seated within fifteen minutes. I ordered something called a 'Skyscraper' (Bacardi, pineapple juice, cranberry juice) and John ordered the Signature Room Punch (Bacardi Black, Cruzan 151, lime sour, pineapple juice, orange juice, grenadine). They were phenomenal! 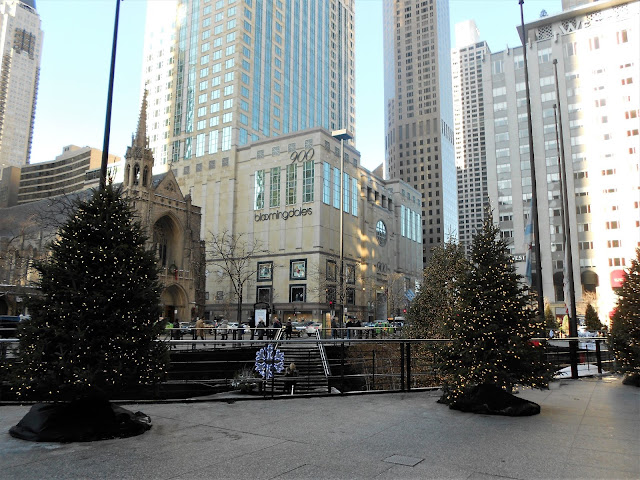 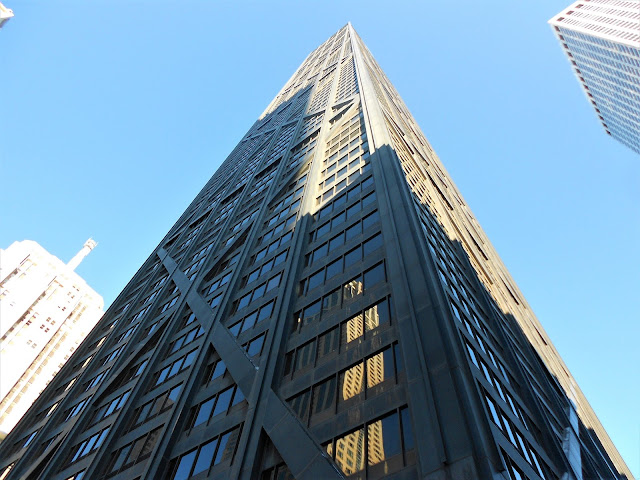 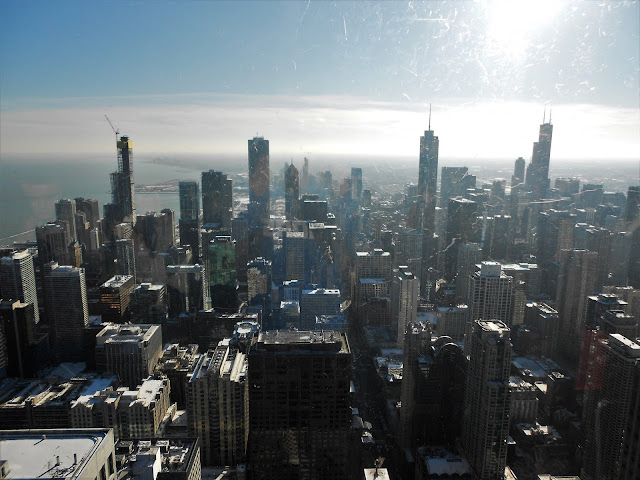 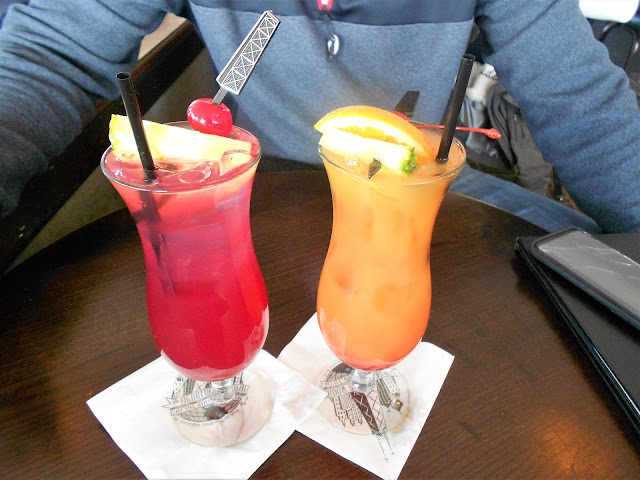 We spent half an hour or so enjoying our cocktails and taking photos before making our way back to the elevator. Once downstairs, we power-walked back to the train as our second parking pass would be expiring shortly. It was another chilly day, so of course we ran through the streets again to keep warm (call us crazy, we were laughing the entire time). By the time we found the train, took the ride back to Kedzie station, and reached his car, it was just in time to avoid a parking ticket. We climbed into the car, amazed that we had just done Chicago in roughly 48 hours! It was a perfect little getaway weekend. But not nearly the end of the holiday...

The next morning, my mom had invited us over for brunch along with my three siblings and their families. My oldest brother works in a church, so we've taken to celebrating Christmas as a family on New Year's Eve instead. She made everything from eggs to a French toast bake to bagels, served with fruit and sausages and mimosas. We spent the day with them, exchanging gifts, running errands, running after my nieces and nephews, and watching Hallmark movies. That evening, we migrated around the block to my sister's house, where she and her husband hosted a New Year's Eve party. It was such a chaotic, fun, food-and-family filled day from start to finish. Not to mention I haven't seen John since Thanksgiving weekend and it was just fun to spend some time with him and with my family to celebrate the holidays. I even got to rock out with my mom during some wine-fueled karaoke! 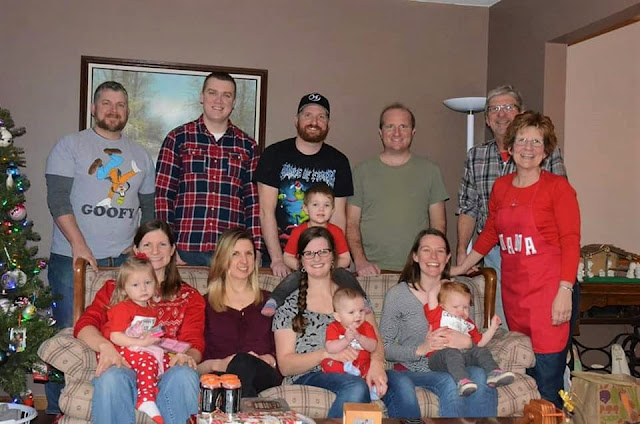 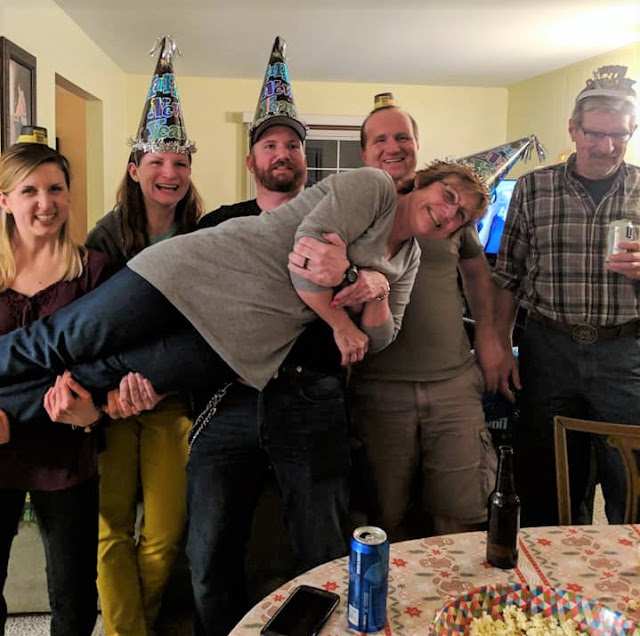 John had to head back up north on New Year's Day, and I spent the rest of my vacation (the first and second) just getting organized: laundry, groceries, cleaning, other errands, etc. The entire holiday season and trip to Chicago just went by far too quickly, but it was the perfect end to a very long year.

I've said on my Instagram page that 2019 is going to be an incredible year. I made a few resolutions of course - save more, go out less, visit friends who live in other states and countries - but for me 2019 is really about finding happiness. It's going to be a year of change, of new experiences, and of figuring things out. I honestly can't wait to see the new year unfold! 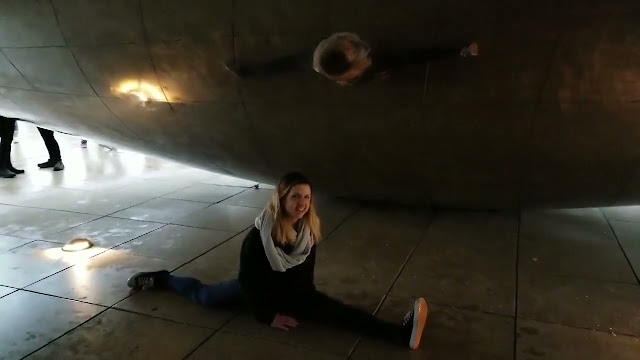