It's not very often that I have time to just wake up and write on a Sunday morning. Usually I'm doing one of a million other things on a weekend, whether its church or a yoga class or errands or something. I have my teacher training this afternoon, but for the sake of just relaxing and catching up after a very full day yesterday, I'm in for the morning. Its kind of nice to just sit here and get some thoughts out!

We're already nearly two weeks into the new year and frankly it still feels like December. Maybe its because we haven't yet had a decent snowfall. Maybe its because I haven't hit that winter 'slump' yet that I've had in past years (not complaining). Regardless, I hope your January is going well! And if you made new year's resolutions, I hope those are going well, too! So while I've got a movie going, fuzzy blanket on, with a cup of green tea next me, let me share some of the latest goings-on... 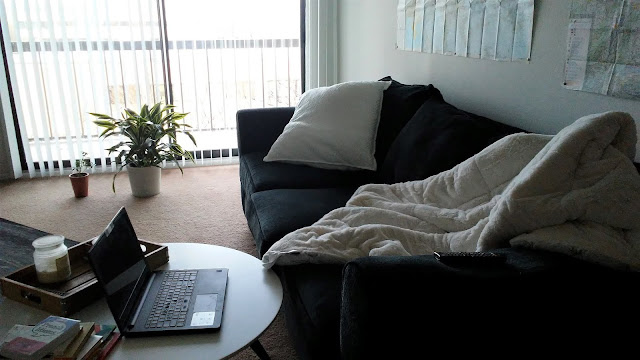 1. This Article: I would recommend that every Millennial and non-Millennial read this article. Being one myself, I've heard countless times that we're "lazy" and "entitled". I've heard we're too into convenience and not enough about quality. I've heard a lot of - for lack of a better term - crap about Millennials and this article did a great job of summing up why that's even a thought. The author writes, "This is why the fundamental criticism of millennials — that we’re lazy and entitled — is so frustrating: We hustle so hard that we’ve figured out how to avoid wasting time eating meals and are called entitled for asking for fair compensation and benefits like working remotely (so we can live in affordable cities), adequate health care, or 401(k)s (so we can theoretically stop working at some point before the day we die). We’re called whiny for talking frankly about just how much we do work, or how exhausted we are by it. But because overworking for less money isn’t always visible — because job hunting now means trawling LinkedIn, because “overtime” now means replying to emails in bed — the extent of our labor is often ignored, or degraded." I've talked with friends of mine who agree - we have no problem with hard work. We're not lazy, we're relentless.

2. Le Bruit de Fond...aka Background Noise: I'm a big fan of Youtube. Now before you cringe or think I just sit mindlessly watching video after video, I really just like to have something on in the background that isn't Netflix (though I do love my Gilmore Girls). Starting when I had a single dorm in college, I've loved putting on The Financial Diet, Ted Talks or lifestyle Vloggers' videos because I can't stand silence. It's great to have on when I write or clean or cook...you get the idea. Anyway, I recently started choosing French videos over English ones, just to keep up my language skills sharp and maintain fluency. Some of my favorites to follow are Anne Dubndidu, Cécile W, and Josée-Anne SC. Ça va très bien, et je vous le recommande!

3. Bringing in a Roommate: Of sorts. Maybe. Specifically a small, fluffy one with longer-than-average ears. TBD.

4. I've Joined the Kohl's Cult: I've never been a huge fan of Kohl's. Or at least, I thought I wasn't. When I was in high school, I didn't like their clothes. Their shoes were too expensive. The purses would soak in the blue from my jeans. The jewelry was too expensive. Things were only "on sale" after the prices were jacked up. And then I discovered TJ Maxx and Marshall's and didn't step foot in a Kohl's for nearly five years. Yet during this time, my mom and sister lovvvvveed Kohl's. I was told on several occasions to give it another chance, especially when looking for professional clothing or unique home goods. Well...I folded. After going to four different stores this weekend trying to find new clothes for work (I couldn't believe even NY&C and Express let me down!), I stopped in to my local Kohl's. You guys, I hit the Jackpot. (Which is huge for a minimalist to say). And then they were talking about discounts and coupons and the Kohl's Charge and I folded even more. I'm hooked. They got me.

5. Tea Over Coffee: One of the first things I do every morning is turn on my hot water boiler, put some grinds in my French Press, and make coffee. I then proceed to drink not just one cup, but the entire French Press. That's right: 32oz. of coffee before I even leave my apartment in the morning. Yikes. And what's worse, by the time my 2pm slump hits, I talk myself out of it because I've already had too much coffee! So after doing some reading on Ayurveda and how different drinks/foods work with different people, I'm swapping out my morning Joe for warm water or tea. We'll see how it goes. I'm actually planning a post on Ayurveda in the next couple of weeks (we're just starting to "dive in" in my Yoga Teacher Training) to explain things more in-depth. 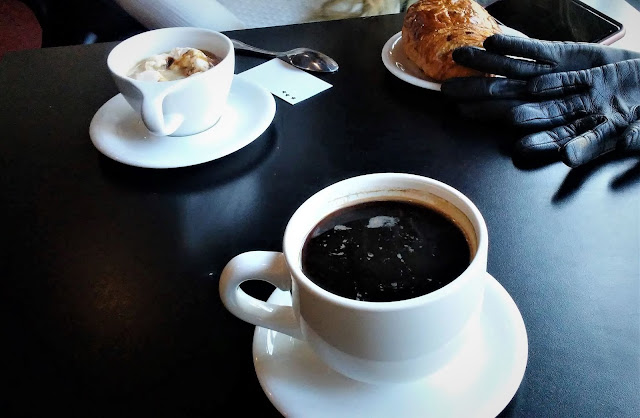 (Coffee date at Atomic Coffee in Royal Oak)
6. Turmeric: I used to be obsessed with chili powder. And then it was garlic. I swear my taste in spices comes in phases. Most recently, it's turmeric. But unlike past 'spice kicks' where I've tasted something I like then proceeded to put it in everything, I actually researched turmeric first. It offers so many benefits, you guys: anti-inflammatory, antioxidants, balanced sugar levels, prevention against Alzheimer's and possibly cancer. It's another tidbit I learned from Ayurveda. (Read more about turmeric here.) It took me a few dishes to find the best amount to add and a word of warning: it stains clothing. But after some trial and error, I've come to really like it. Recipes to come!

7. Nino Salvaggio: My new favorite grocery store. Seriously. I could elaborate on this but I think I'll just send you here.

8. Trip Planning: Obviously not everything can be determined just yet (breaks, work/time off, family things, etc.) but should the opportunity arise, I have a few places in mind I'd like to visit this year. Close friends of mine from St. Ignace moved down to Iowa last July, and I fully intend on visiting them as soon as possible. I'd also love to head east and do some exploring along the coast. I was really hoping to go to OCS last year (I was planning to join the Navy), which is in Rhode Island, so when that fell through I realized I wouldn't get to experience the East Coast. I'm still dying to go! And finally, Italy is still at the top of my list for my next international adventure. Even just writing this paragraph, I know there's a lot up in the air, but those are my tentative plans for this year. Not having gone anywhere (except Chicago) last year drove me absolutely nuts and my suitcase is calling. 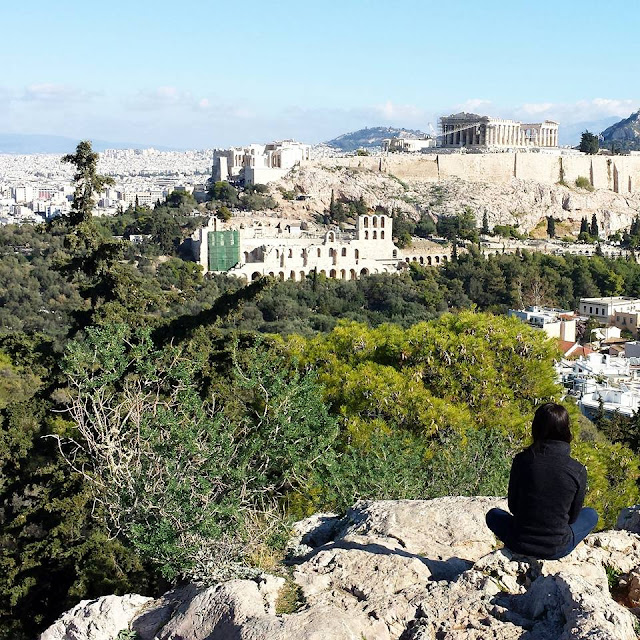 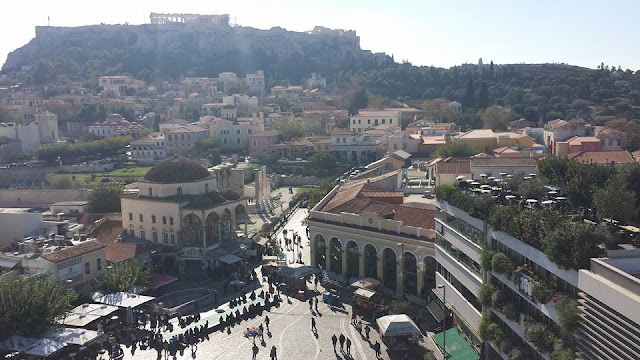 (Athens, Greece)
9. My Little Chevy: I love my car. Truly. I've had it for the past 10 years and its been with me through everything: learning to drive a stick (its a manual), moving off to college in Minnesota (and subsequently several 1000+ mile trips back and forth between home and school), moving into my first apartment (and my second, and third), multiple adventures in the UP, driving down to Missouri to visit family, several family camping trips during the summer, and a multitude of other things in between. I love it. It gets great gas mileage, is fun to drive, and fits in the tightest parking spaces. But. Its time is coming to an end. The speakers cut in and out, the check engine light comes on 'when it feels like it', it sounds like it has breathing problems when I drive it, the key fabs haven't worked for years, the physical keys won't turn in the doors, half the windows are tinted (we had to replace the doors on one side and didn't realize it until they were securely in place), and just this week it turned 150000K (miles). Now I realize most of this is fix-able but beneath all of this, its become something of a money pit. So...a new car is in the very near future. I'm very fortunate to have a family member at GM, so I'm getting a great deal on my new (drum roll please!) Chevy Spark! Last year at this time I had my heart set on a white Cruze, but the deal on the admittedly sugarplum-colored Spark is one I can't pass up. If you see a purple gumdrop coming down the road, be sure to wave.

10. Joining the Library: I've been putting it off since I moved, but I finally joined my local library a couple of weeks ago and it's incredible! Because let's be honest: books are great, and they have a huge foreign language section.

I hope you've enjoyed this rambly/chatty sort of post. I'm off to get on with my Sunday (Yoga Teacher Training, a family party, mayyyybe getting to the gym), but I hope you all have a great Sunday. Feel free to leave me a comment down below or connect with me on Instagram. I'd love to hear from you!
at January 13, 2019