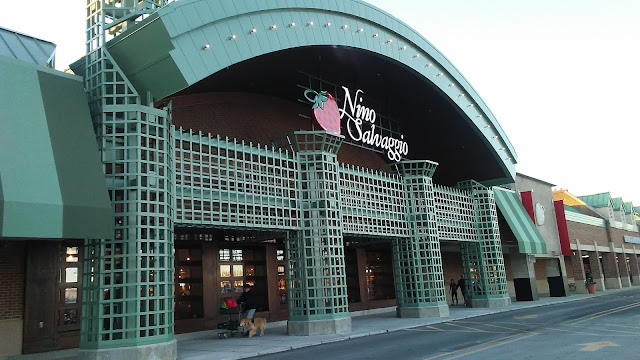 Over the last several months, I've spent quite a bit of time exploring. Every since I moved down to metro Detroit from Michigan's UP, I've thoroughly enjoyed checking out local spots: cafes, restaurants, pubs, produce markets, breweries...you get the idea. It seems there's always something new and exciting to find in town, or at the very least a short drive away. What's more, most places offer plenty of vegan/vegetarian options. It's been quite a change from life in the UP! So you can imagine my excitement when a brand new market came to town: Nino Salvaggio. A new location opened last week in Bloomfield Hills, MI - just minutes from my apartment. And despite the fact that we have a Meijer, Plum Market, Kroger, Target, Trader Joe's, Whole Foods, and Aldi right within a 10-mile radius, everyone was excited for its Grand Opening. So last Saturday, I grabbed my burlap shopping bags and headed off to check it out. 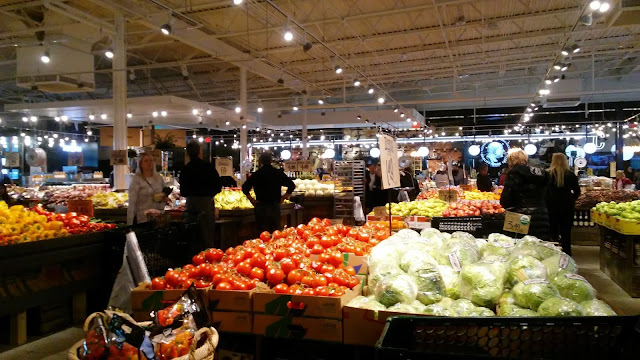 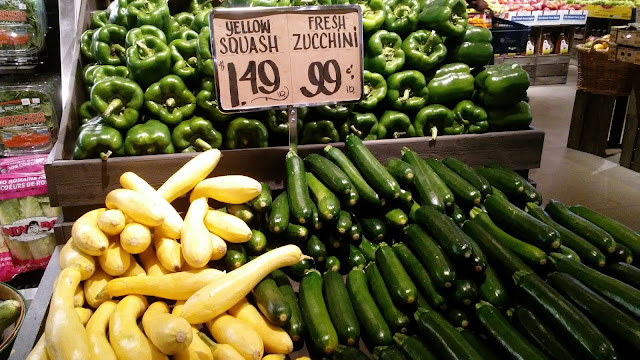 As you know, last July I made the decision to go fully vegan. It wasn't a terribly difficult decision to make, given that I've been vegetarian for several years. But I've found that this time around, I've been much more adventurous: not only with things I'm willing to try (seitan bacon, coconut milk ice cream, acai bowls, etc.) but also with how strict I've been. I actually had a great conversation with my sister over the holidays and we concluded that diet labels are ridiculous. "Keto, Paleo, Vegan, Pescatarian, Vegetarian," etc. have been blown out of proportion, and if you claim to be one or the other and dare to mess up, well....then you can't possibly be keto/paleo/vegan/etc. We've set ourselves up for failure here. And while yes, there are certain dietary restrictions that need to be followed for health reasons (dairy free for the lactose intolerant, gluten-free for the gluten intolerant, etc.), here's the truth: we're all human. We're going to slip. We're going to need exceptions to make it work for us. And when we've labeled ourselves as one thing or another, having something that doesn't fall under our "diet" feels like cheating. It feels like we've failed.

Well I'll be honest: I'm not 100% vegan. The holidays were difficult, and I had some breakfast bakes (which included eggs and likely cream) and a few homemade chocolate truffles. Of course I still care about humane practices in animal agriculture and the hormones they add to what animals are fed, etc. etc., but I also care about my family and not making every get-together awkward and uncomfortable. So...I "cheated". But you know what? I've found a pretty great balance. (After all, that's what life is all about, isn't it?) Rather than stick a hard label on it, I'd just say "plant-based", because while I'll never eat meat again (don't get me started), I will eat eggs or Greek yogurt on occasion. But I'd prefer not to have dairy like milk, cheese, etc., so I can't really call myself a vegetarian either. So....let's just stop with the labels, friends! Whatever you call yourself - whatever I call myself - its safe to say that you're going to love this new market. Nino Salvaggio caters to every diet; it's a market of the world, for the world. 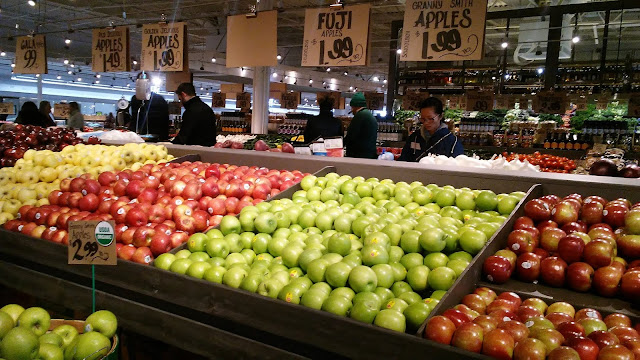 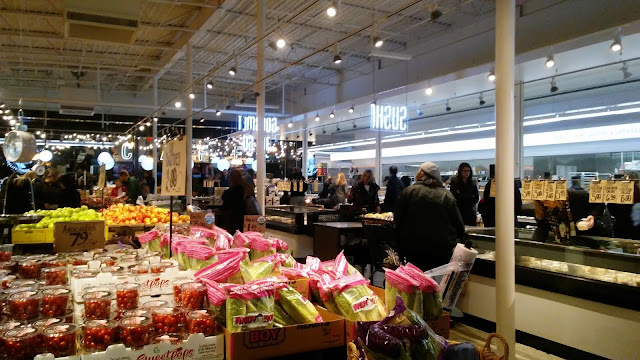 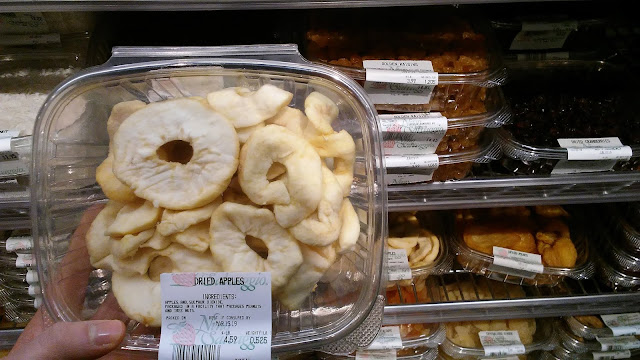 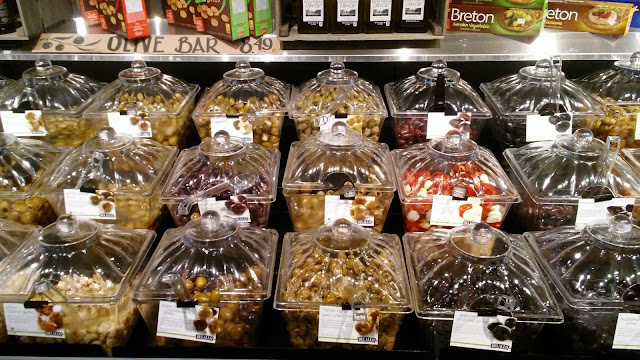 I've only been to two other Nino Salvaggio's in my life and admittedly its been a few years, but I was truly impressed. Walking in for the very first time, I was overwhelmed. There was a flower shop, a cafe, and a catering service all just inside the door. Then there was the actual market itself: loads of fresh produce at a fraction of the cost of other major grocery stores. Zucchini: $0.99/lb. Avocado: 2/$1.00. I was blown away. And then I saw the olive bar (the photo above is maybe 1/4 of the total spread) and my heart melted. And then, dear friends, I turned around and saw the cave: 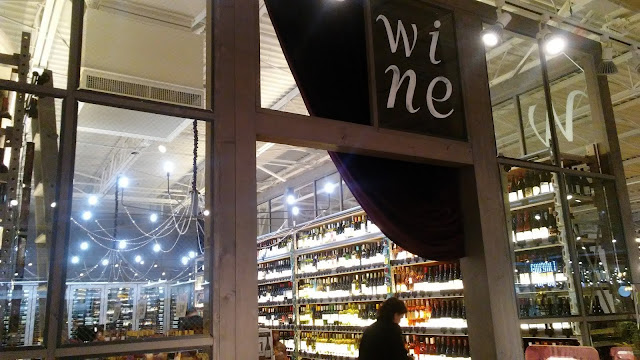 There were literally wines from every country - from every region of every country - both room temperature and chilled. I was absolutely delighted, and walked around browsing for a bit before someone shattered a bottle nearby and the clean-up crew flocked to soak up the mess. I thought I might head out to buy my produce and leave, but there was so much more to see. Down each of the aisles were your standard products - soup, pasta sauce, snacks, etc. - mingled in with products I've only ever seen at Whole Foods or online at Thrive Market. Nino Salvaggio actually carries TVP! And then I saw the tea and coffee aisle... 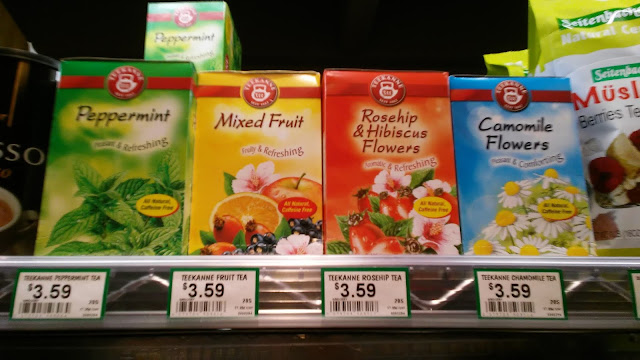 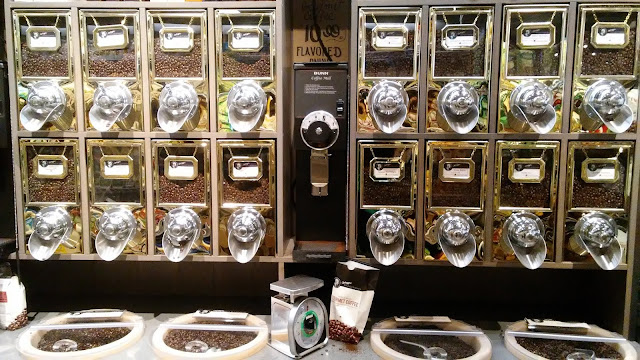 Oh the excitement! Naturally I had to buy a box of TeeKanne. When I visited Kristina and Theresa after my college graduation, I fell in love with TeeKanne and their very unique tea blends, particularly the Mixed Berry blend and the Apfeltee. I couldn't have been more delighted to see it on the shelves at Nino's and immediately put a box in my cart. I will be back for more!

Facing the aisles of groceries was a massive baked goods section, including (but not limited to) cupcakes, cakes, pastries, donuts, bagels, artisan loaves of bread, baguettes, pita, breadsticks, and to my surprise, free samples. I mulled around munching on a slice of baguette before choosing a giant loaf of sourdough to take home with me (it reminded me entirely of Marks & Spencer in Dublin). They had bread for everyone: regular, vegan, gluten-free, egg-free...did I mention this place felt like heaven? 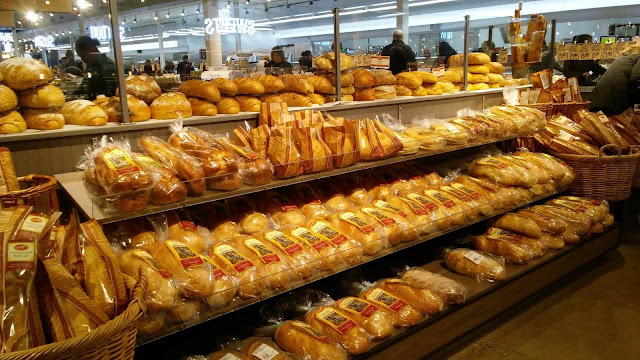 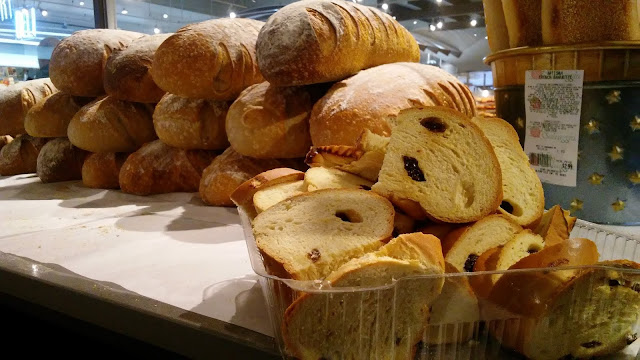 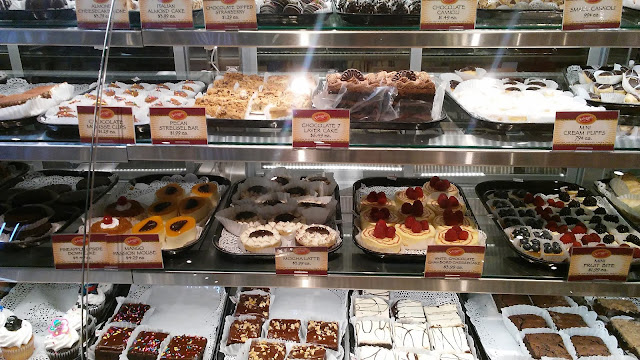 Oh, and for those who need something other than wine to accompany their bread...there was cheese: 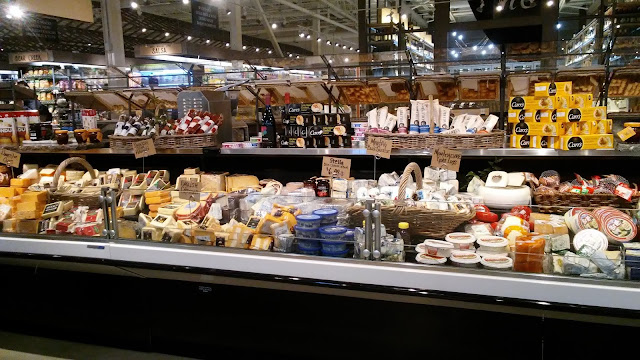 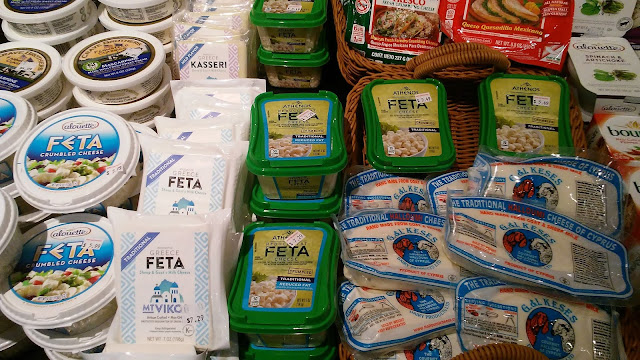 (Feta...the very hardest thing about being mostly vegan!)
Now. This particular Nino Salvaggio is in the same plaza as my Trader Joe's. I'll be honest: I was worried when I learned they were opening that it would be bad for business for TJ's. They're both great stores with great prices. They both cater to diets of all kinds. But I will say: they complement each other nicely. Nino Salvaggio wins when it comes to prices for "by-the-lb" produce and overall variety. But I still had to run in to Trader Joe's for a few "by-the-item" pieces of produce and unique items like Jackfruit and beet hummus. It's a win-win-win.

For dairy-lovers, they have a wide variety cheeses (obviously), milks (both regular and non-dairy), cream cheese and sour cream, eggs, and yogurt. For those who prefer to eat Kosher, they have an entire aisle. For those who love frozen goods from hamburgers or fruit for smoothies, they have you covered. And for meat eaters, Nino Salvaggio is a great place to go. They had everything from London broil to stuffed sole, a sushi station, and a great "by-the-lb" deli. And while I don't eat fish or support mass fishing in the oceans, I'll give them a nod for their impressive fish display. Because who isn't entertained by a shark with a lobster in its mouth? 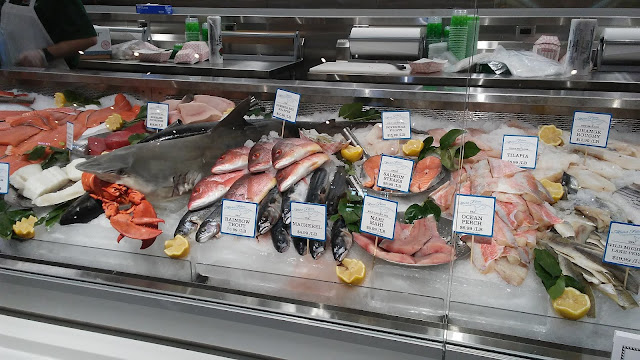 I made it out of Nino's with two avocados, a box of tea, a bag of TVP, a loaf of sourdough, and some dehydrated apples (because they're amazing, am I right?). I spent far less than I was expecting to, given Nino Salvaggio is known for being a high-end market. Overall it was a great experience: excellent quality, excellent prices, and yummy samples. And if you're like me and enjoy spending an afternoon lulling about in a supermarket, I would highly recommend paying them a visit.

Between Meijer, Plum Market, Kroger, Target, Trader Joe's, Whole Foods, Aldi, and now Ninos Salvaggio, I'll likely never have to venture far for groceries. I'll also likely never have adequate room in my wallet again given the amount of membership cards I've amassed. (I would narrow them down, but I know the deals: produce is cheapest at Nino's, Kombucha is cheapest at TJ's, Target and Meijer have coupon apps, etc.) What can I say, I like my grocery stores! So no matter what your diet - no matter what your food or moral preferences  or food intolerances are - Nino Salvaggio can undoubtedly cater to your needs.

If you decide to check it out, let me know! I'd love to hear what you think of their new Bloomfield Hills location and any products you'd recommend. Simply leave a comment down below!

***This post is not sponsored in any way and does not contain any affiliate links. Any opinions expressed are entirely mine and mine alone. Just sharing because I truly enjoyed my first experience at a great new market!***
at January 09, 2019 No comments: