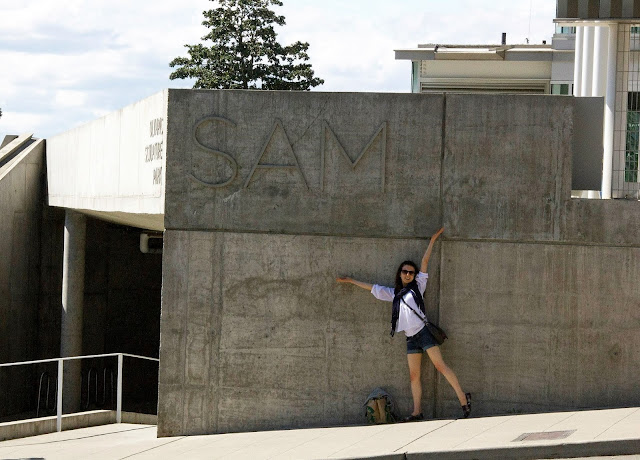 Good morning friends, and happy Sunday! I hope you enjoyed your extra hour of sleep this morning (I know I did). It's been a lovely but busy weekend of yoga teacher training, writing, checking out a new town, and spending a 'brunch day' with my mom. It feels so good to finally just relax! I posted an Instagram story about a week ago asking if you had any questions for me - on anything: being vegan, travel, blogging, etc. - so this evening I thought I'd take some time to answer. You guys are curious!

1. What do you miss the most from pre-veg days?
This is a no-brainer: Greek food. Before going vegan, I absolutely loved my Greek salads loaded with feta, Baklava (which, if you didn't know contains loads of butter and honey), and Spanikopita (spinach pie). I was vegetarian for years before going vegan this summer, so these were 'ok' since technically they contain no actual meat. I went to Greece in 2016 and thoroughly enjoyed having legitimate, 'traditional' versions of these. Plus I was glad that I experienced the true culture of Greece. But now, back in the US, trying to live a plant-based lifestyle? Nope. I've actually been on the hunt for a good vegan Spanikopita recipe so if you happen to have one, please let me know! 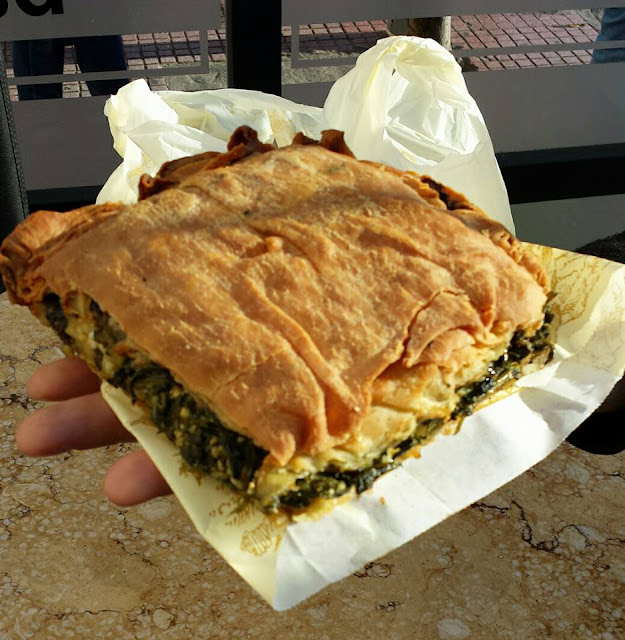 2. What do you do?
I'm assuming this means what is my job? I think? My title is "Resource Development Manager", which for those who don't know means that I'm a recruiter. I work at an IT/Engineering staffing company so I spend my days talking to people in the field who are looking for a new job. We hire for different companies across the United States, and I work with everyone from Java Developers to Service Desk Analysts to Business Analysts (if you're looking, let me know!). And yes, I have a cube.

3. You talked about the Navy, did you ever go to MEPS?
YES. I went to MEPS in November of last year. MEPS was not as bad as everyone makes it out to be. I read everything I could find (and watched videos on Youtube) prior to going to MEPS so I would know what to expect. It started by checking into a hotel the night before with 30+ others who were also going to MEPS in the morning. There was a restaurant in the hotel, so we had an amazing dinner provided entirely by the Navy. The next morning, they gave us a wake-up call at 4:30am, followed by an enormous breakfast buffet in the dining area. By 6:00am, we checked out of the hotel, took a bus to the actual MEPS station, and signed in. Then we filled out paperwork and listened while someone stressed the importance of being truthful and not lying in anything we told them, and generally what was expected of us throughout the day. They separated us into groups to go to the different "stations", and the next few hours were spent doing hearing tests, getting blood drawn, doing a urine test (drug test/pregnancy test), and having our vision checked (I failed my depth perception test. I had a muscle surgery in my eye in 2010 and my eyes still can't handle the binocular-style 'where is the ball in relation to the box?' test). I had gotten the necessary documents from my eye doctor, so they were aware of the surgery (100% required if you've had surgeries, guys), but I do think this may have been a reason I didn't get in. If you fail depth perception, you're automatically disqualified from certain jobs like aviation (which was my top choice). After that, we spoke with a counselor who asked us some questions about our backgrounds, and then it was time for the physical exam. I was in a room with 7 other girls, and we had to strip down to our underwear (PS do NOT wear a thong to MEPS!!!). We went into a room where they had us squat, duck-walk, jump, sit on our knees, jump to our feet, lunge, lift our arms over our heads, etc. to check our mobility. Then we went one by one into a room where a doctor and his assistant gave us a very thorough exam (if you've been to the ob/gyn, this is not as intrusive). We got dressed and headed back into the main waiting area, where we met with someone who asked us who our beneficiaries would be, if we had any dependents/spouses, etc. and finally got our fingerprints taken. All in all, I spent about 6 hours at MEPS. And that was it! Phew!

4. When are you getting your tattoo?
For those who don't know, I currently have two tattoos. I have one rose (colored) on my side and two black and white roses on my shoulder. I've talked about getting another one and fully plan to in the next few months (though I have to buy a new car first...priorities...) and have so many ideas. I'd really like to get a Mandala, based on its meaning of wholeness, perfection, balance, and eternity. I would get it just below the roses on my shoulder (coming down my arm) because I do eventually want to have a 1/2 or 3/4 length sleeve. (Crunchy vegan yogi, I know.) I also have to find the time to drive up to the UP to get it, because Solomon's Tattoo Parlour is about as far north as you can go (in Sault Ste Marie, MI). Say what you will, Solomon's is 100% worth the drive and I wouldn't go anywhere else! 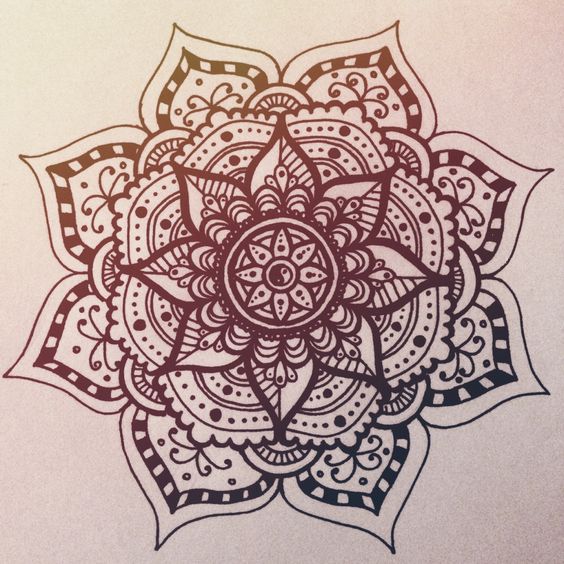 (This is what I want, minus the yin-yang symbol in the center) 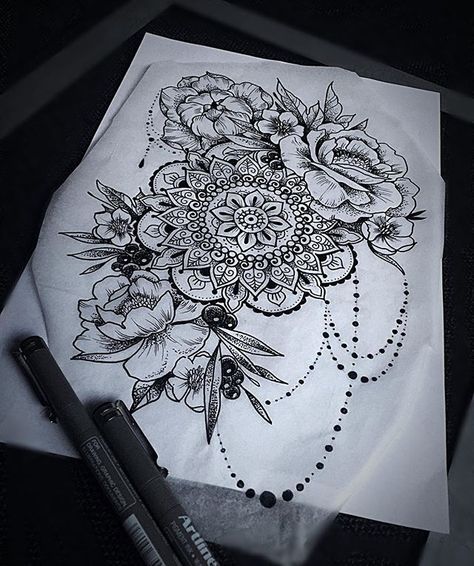 (And this is the placement-ish of how I want it under my roses)
5. Do you ever miss living in the UP?
Honestly I miss the people more than the place. And the gym there was far better than the gym at my apartment. But other than that, no. I made some great friends while I lived up north, but I have no plans to ever move back. I do plan to go for a visit, and of course when I drive up to get my tattoo I'll make a stop, but that's it. This girl was not made for the UP.

6. When are you coming back to Germany?
I wish it was soon! I went to Germany last November (post to come!) and visited a friend in Bielefeld, family in Preußisch Oldendorf, and two other friends in Berlin. It was an amazing trip, and of course I want to go back asap! I've been to Germany four times now and am certainly planning to go back. I've actually talked to one of my best friends (who lives in Bavaria) about meeting in Italy next August, so as of now that's the plan. Maybe we'll meet in Bavaria then take a train or drive into Italy...not really sure yet. But there will be travel next year. It's been too long! 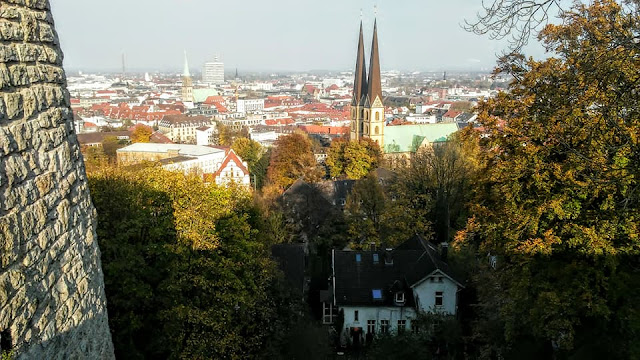 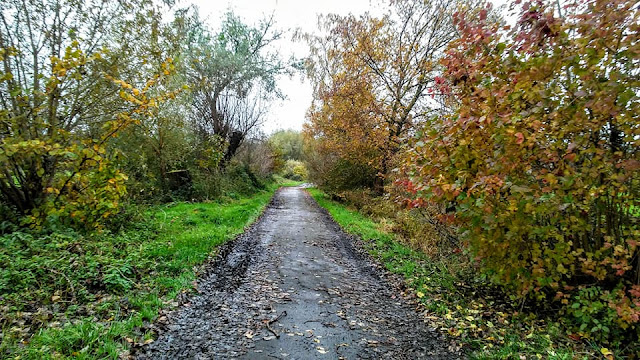 7. When did you start working out?
I've always been a pretty active person, but I'd say the real turning point was in 2012 when I got into Insanity. At the time, I was dating someone who went through the two-month Insanity program with his friends, and he talked me into it. We did some of the workouts together, I did some on my own in my dorm room, and somehow I managed to get through the two months. It was a good workout but I didn't like that it was all bodyweight exercises. When I finished the two-month program, I picked two or three videos that I enjoyed the most and did one every other day. In the meantime, I started going to the gym on campus to meet more people. I stopped doing my 'every other day' Insanity in 2014(ish) and only worked out at the gym, now having made friends with a few beefy rugby players and other students who were just really passionate about lifting. They introduced me to other gyms in town, and soon I was into everything from BCAA's and protein shakes to pre-workout and counting macros. I loved it. I actually thought about 'prepping' for a bikini competition at one point, and took weekly progress pictures every week from September 2015 to December 2015. I was kind of surprised (and kind of proud) at what can be done in just four months! 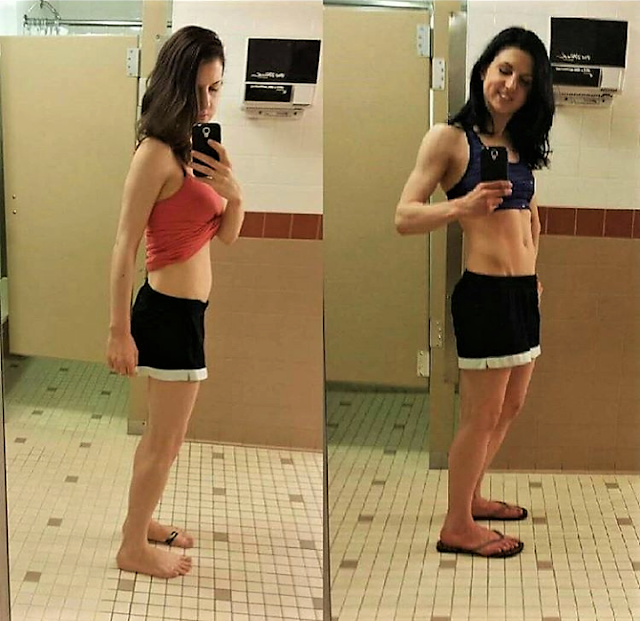 (Awful picture quality, and I was still super tiny, but I had come a long way!)
Obviously, the competition didn't happen (I realized how expensive it was and decided to save up for my post-grad trip instead - read about it here and here). But that period of time helped me fall in love with lifting and focus on building strength rather than just going to the gym to do endless amounts of cardio. I've tried to prioritize the gym ever since and still try to push myself for the simple reason that it's fun. I actually enjoy working out and feeling myself grow stronger. Yoga really took off this past summer, and since getting back into it, I haven't let my foot off the gas in the gym. If anything, yoga has made lifting and working out that much easier.

8. What's your favorite kind of wine?
Gosh, I love that these questions are all over the place! My favorite kind of wine is called "Wolf's Prairie Red" and it comes from a Michigan winery, Domaine Berrien Cellars. I was introduced to it at Michigan By The Bottle, a chain of wine tasting rooms here in southeast Michigan. Its a bold, spicy red that quite frankly smells like a campfire. Think Cabernet meets Witch's Brew meets a Bonfire. I seriously cannot say enough good things about it! It goes well with dark chocolate, roasted veggies (especially fall ones like squash and cauliflower) or even popcorn (doesn't all wine?) I absolutely love it!

9. What made you decide to adopt minimalism?
I'm going to take the easy way out here and redirect you to this post right here.

10. Where are you from?
Despite all the moving around I've done, I'm originally from southeast Michigan. Born and raised, junior high, high school...the early years were all in Michigan. And then I started moving around. I went to school in Minnesota and spent 4.5 years way up in the Fargo-Moorhead area. I spent one summer living just outside Portland, Oregon. I spent another summer living in Dublin, Ireland. And if you've been following my Travel Bug posts, you know I've been to several other European countries as well. I moved back to Michigan for a year after college, then up to the UP, and now I'm back (about 25 miles away from where it all started). Honestly though I'd love to experience life in Texas. Or on the East Coast. Or somewhere like Wisconsin. Or even back in Minnesota, maybe in the Twin Cities. I don't know. Just because I'm from Michigan does not mean I want to stay here forever. As cozy as it is, I wouldn't say I'm 'smitten by the mitten'. Tangents are great, aren't they? 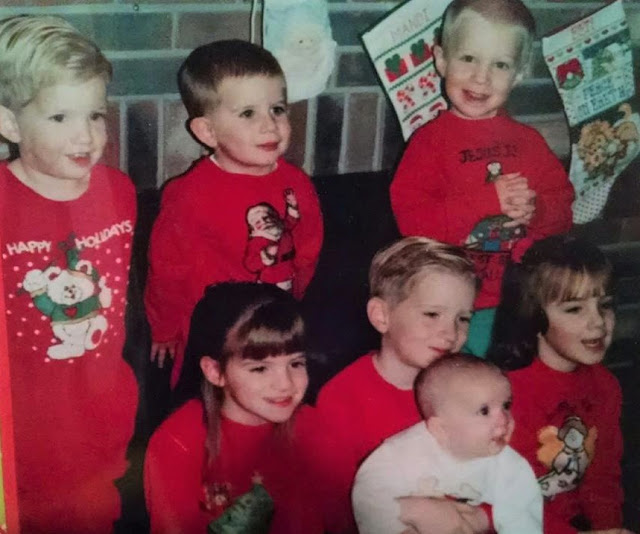 (Yep - that's me, front and center! This is what Midwest children looked like in 1993)

That's all for today, but I hope you've enjoyed getting to know me a little better! I appreciate all of your questions and had a great time answering them. Keep an eye on my Twitter and Instagram for future Q&A's or feel free to drop me a line (contact info here). I'd love to get to know you all better, too!
at November 04, 2018