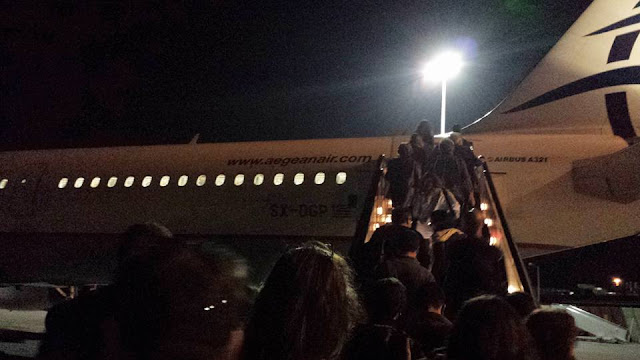 Everything was gone: my credit cards, my driver’s license, the €260,00 I’d taken out of the atm the day before. How am I going to buy my bus ticket? What will I do for food? How am I going to make it another six days without any money? My heart was pounding and I felt I might be sick. Do I get on the plane? Do I go back to the AirBNB? What do I do?


The bus driver was of no help. According to him, this wasn't uncommon in Greece. Pickpockets targeted public transportation all the time: it was easy to get away with without being caught because everyone was moving about. My heart sank. My mind was racing. My instinct told me to call my mother but it was only 3:00am in America. And ...my flight to the next city left in forty minutes. I checked my bags about a million times, hoping to see my wallet poking out from a pocket or something. I had no luck: it was gone.

The next five hours blurred together. I found an attendant who helped calm me down and print my boarding pass, then directed me to the airport's police station. Only one officer spoke English. He helped me to cancel my credit cards, call my next host to let him know of the situation, and explained that my family could use Western Union to send me money. I tried to remain calm, but I wanted to cry. I was in a foreign country, with nothing but my luggage and a passport. It was a nightmare.

The officer instructed me to get on my flight, text my host when I arrived using WhatsApp, and he would come pick me up at the airport in Chania. The original plan was for me to take the bus to the stop nearest his house, but I no longer had money for a bus ticket. And then to my horror, I got to the airport and didn't have a steady enough WiFi signal to message him. An attendant at the airport told me the WiFi was down. Of course. So I wandered around the airport for nearly three hours until I found a corner where I could connect for more than two minutes. Yiannis - my next Couchsurfing host - came an hour and a half later and I hugged him like he was a parent coming to rescue his kid. I had never been so thankful to see a complete stranger in my life. 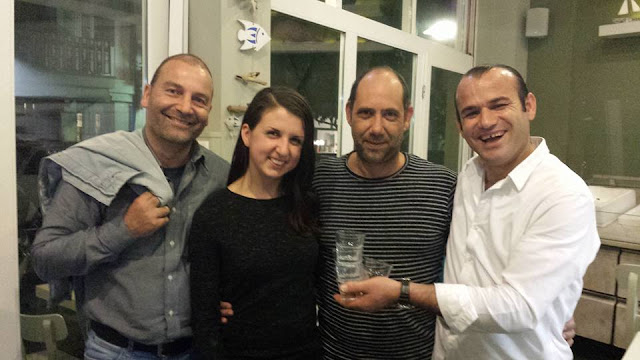 Looking back at how things unfolded, I could not have been more fortunate. Yiannis made sure I had food to eat. He made sure I had spending money. He took me out for pizza and beer on the way home from the airport, where I learned he actually owned and ran a brewery right there on Crete. Fittingly, it was called Cretan Brewery, and the pizza place we'd stopped had his Charma lager on draft. It was phenomenal, and I was beyond relieved to know I had such a caring host. We figured out a "plan of action" over dinner, then headed to his house and out to the Venetian Harbor for a late tour. It could have been a miserable first night on Crete, but it was absolutely incredible. 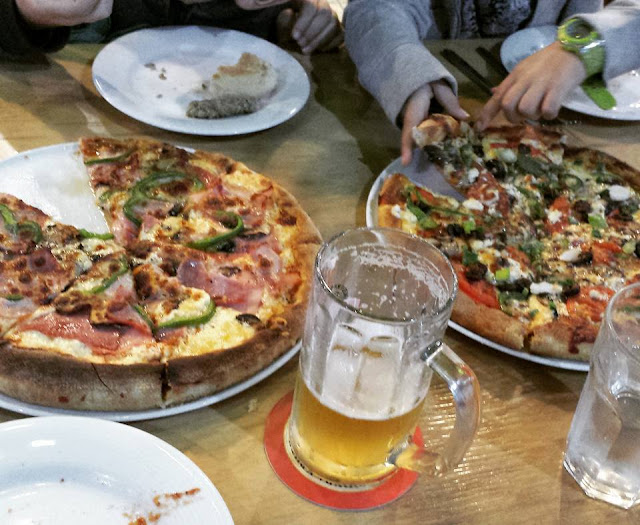 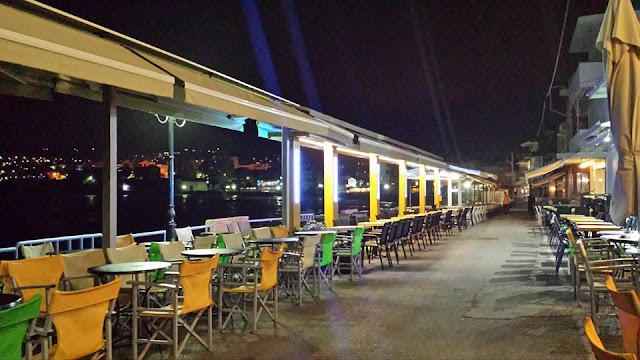 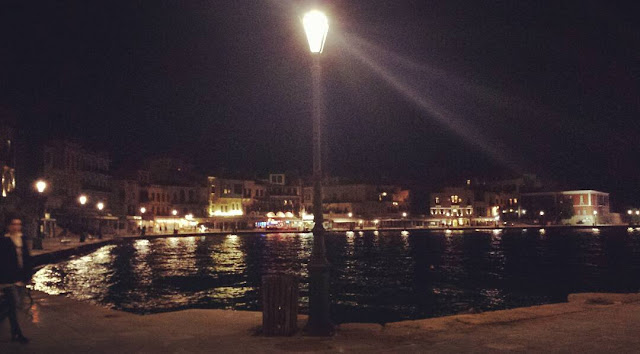 The rest of my time spent on Chania was both the most amazing few days of my life and the most frustrating. My mother tried to send me money through Western Union, which can normally be done online or in-store with a credit or debit card. But because the economic situation in Greece was so terrible, she had to use cash only...so it took an extra few days to arrive. My bank also said they could send an emergency replacement debit card to Yiannis' house from a mint in Germany, and that would take an additional three days to come. I had an unconfirmed ferry trip planned from Chania to Santorini, then back to Athens, which was nullified when I cancelled my credit cards. So I had a flight from Athens back to Detroit pre-paid, but no way to get from Chania to Athens. I was literally stranded on an island. Fortunately, as soon as I posted something on Facebook about it, several people reached out to me asking if they could help (you all are amazing!) and one of my friends from highschool offered to buy my flight from Chania to Athens. Pat Wagner, you literally saved my trip and I cannot thank you enough. You know a true friend when they don't think twice about booking you a flight to help you out of a tough situation. I had never felt more relieved in my life.

On a positive note, my time in Chania was very well spent. Yiannis sent me on a Jeep Expedition through the White Mountains with an employee from his brewery: they wanted to add the brewery to the tour (which included a winery, trip through the olive groves, lunch, and a view of a shepherd's hut at the top of the mountains). He had a sensitive stomach, so sent me to see what I thought. It was the most incredible day. Everything from the wine tasting to the traditional Cretan-style lunch at a small restaurant in the mountains to driving up near 90-degree angles made for an unforgettable experience. All thanks to my wallet being stolen. 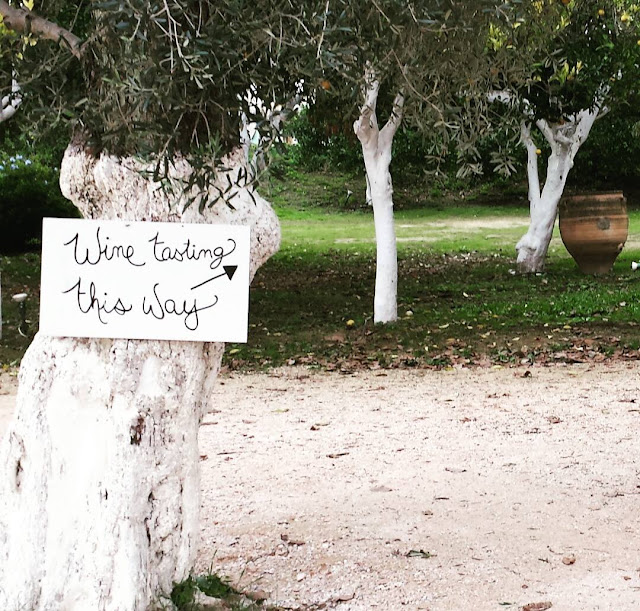 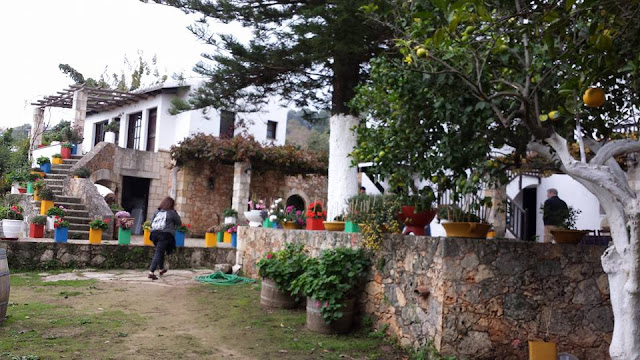 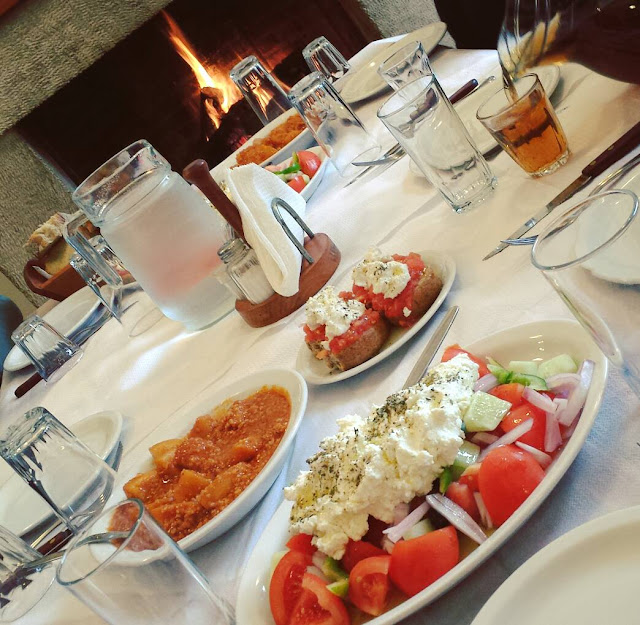 The most amazing lunch ever 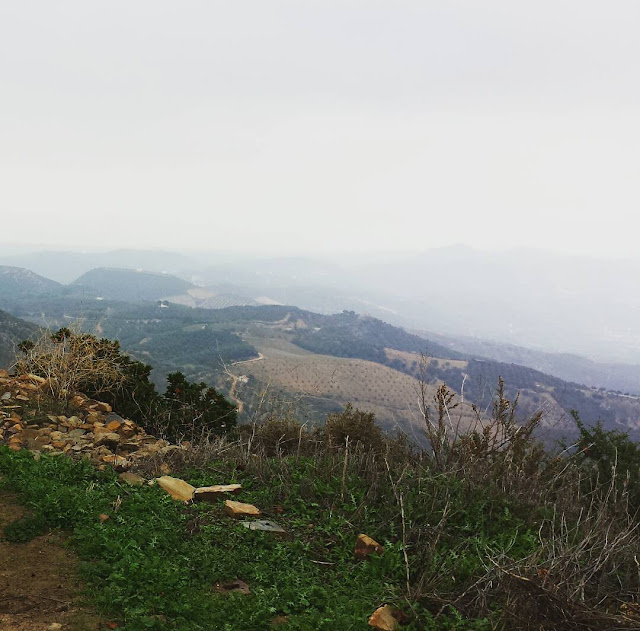 I'm in love with this view. Breathtaking. 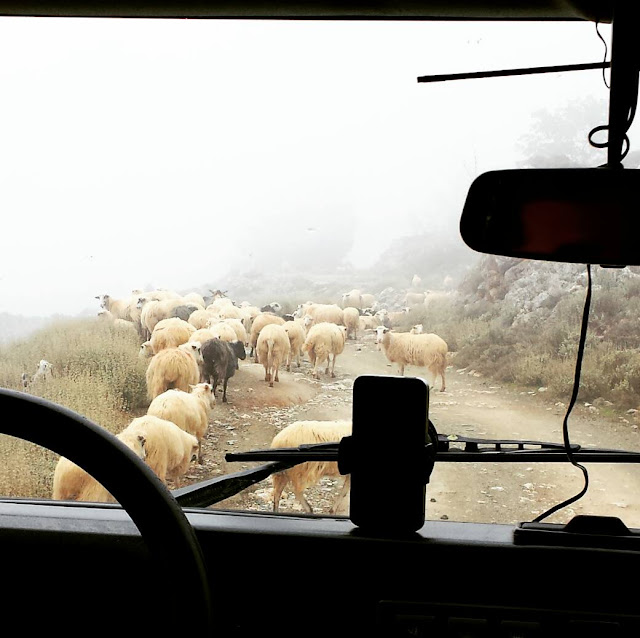 Because I stayed a few days longer than originally planned, I got to meet Elena - the next Couchsurfer coming to stay with Yiannis. She was from Moscow and we got along like old friends as soon as we met. We explored the city together (she takes beautiful photos!), talked and drank homemade wine together, and even cooked dinner for Yiannis one night. In return, he took us on a tour of Cretan Brewery and we got to try all three of his brews (there are far more now) and see the beautiful brewery. The morning finally came for me to pick up the emergency debit card from the UPS store, pick up my mother's money at the Western Union store, and head to the airport. Chania had been such an adventure, and I would go back in an instant. 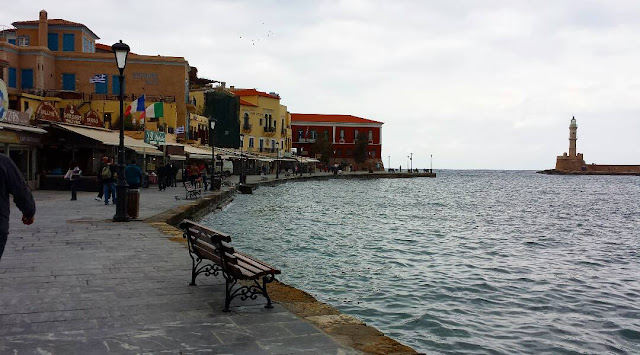 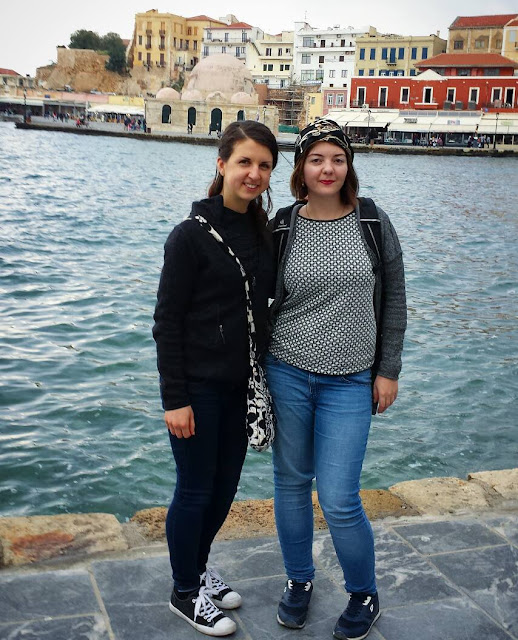 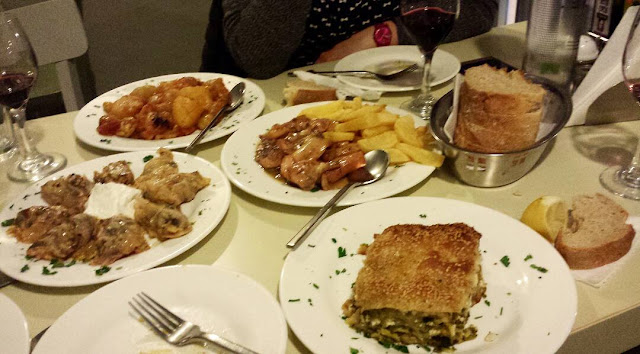 Yiannis also took us to a family restaurant for an absolute feast: several kinds of seafood, Boureki (recipe to come!), fish soup, fries, fresh bread, and plenty of wine. We actually had it on Thanksgiving day, and it was the greatest feast I've ever had. 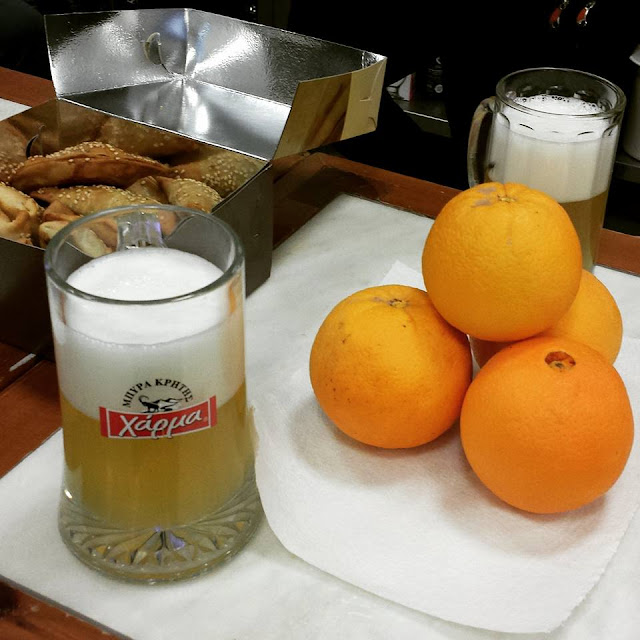 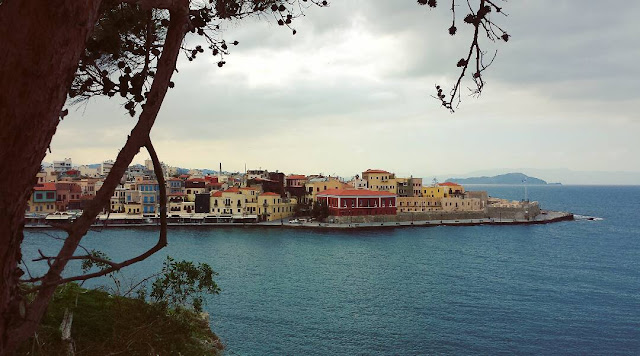 Money in hand, I took a bus back to the Chania airport after a sad good-bye to Elena and Yiannis. With the whole "stolen wallet" situation, I felt like I'd grown closer to them than I would have had I been able to be on my own the entire time. So maybe it was a blessing in disguise...maybe having my wallet stolen was actually a good thing that helped me to get the most out of my trip. Of course I was bummed that I didn't actually find my Greek relatives (Yiannis told me that since their last name didn't end in "-akis or -aki, we weren't actually from Chania. Rather, it was just where the boat left for America). But it was incredible to witness the culture and meet all of the wonderful hosts I had.

When I got back to Athens, I had just enough money from the Western Union transaction to last another three days before heading home. I didn't stay with Christophe again, as I wanted to meet more people and spend time in a different area. But we did meet up for dinner one night so I could get my Starbucks mugs from him (I'd left them at his apartment knowing I was coming back to Athens) and we talked about everything I'd seen since leaving Athens. It felt like I was having dinner with a close friend, and I was so thankful to him for paying that evening. The emergency replacement debit card hadn't worked: I had nearly $350 in international phone charges when I got home trying to figure out why it wouldn't work in any restaurants or stores, and was mortified when they told me it had been printed incorrectly. It hadn't come with a pin number. There was no three-digit code on the back. My bank felt terrible, and while it was MasterCard's fault (not theirs), they still offered to cover the fees and sent me a gift card for my troubles. So by the time I ran to the bus stop the next morning (in an absolute downpour, of course), paid for my bus ticket to the airport, and bought a small sandwich at the airport for lunch, I had $12 left. I hadn't been able to buy any of the souvenirs I'd been planning to for my family and friends, but I made it back to America. After a container of hummus and pita chips and a beer at the Toronto airport (I had a six-hour layover before flying back to Detroit), I had a grand total of $1.50 left. 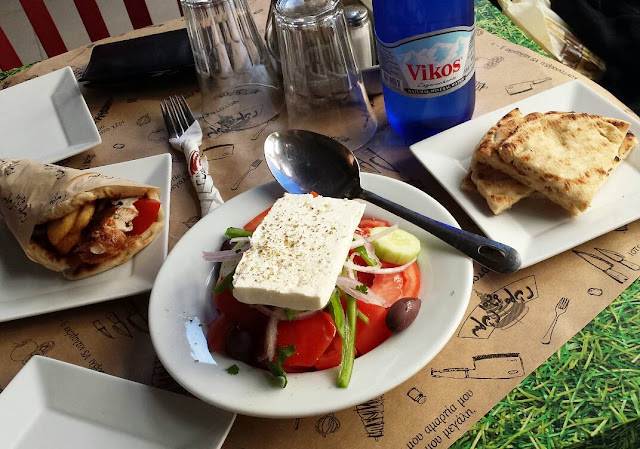 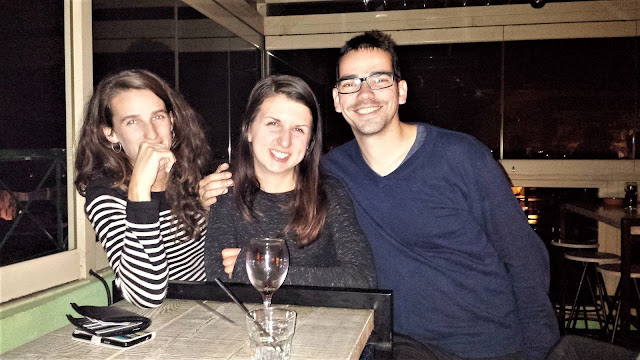 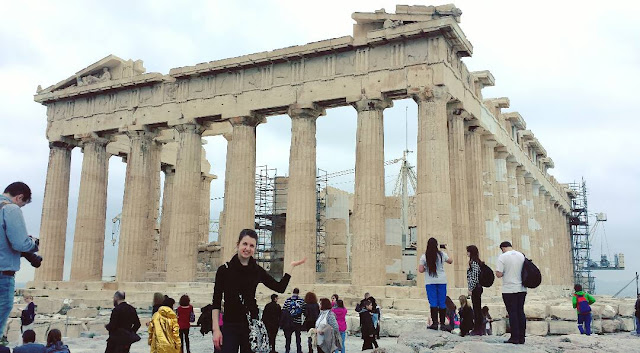 Once I made it back to Detroit, my friend Leslie picked me up at the airport and drove me home (she lived just one floor above me in my apartment complex). I was thrilled to find my replacement credit and debit cards waiting in my mailbox, and excited about finally sleeping in my own bed again. I had to be at work the next morning, and was a zombie the entire day. But I had made so many memories in just two short weeks.

As Anthony Bourdain said, "“Travel isn’t always pretty. It isn’t always comfortable. Sometimes it hurts, it even breaks your heart. But that’s okay. The journey changes you - it should change you. It leaves marks on your memory, on your consciousness, on your heart, and on your body. You take something with you… Hopefully, you leave something good behind.”

My trip certainly wasn't always pretty. It definitely wasn't always comfortable. It sent me to the edge of my comfort zone and made me appreciate all of the little things I take for granted. It opened my eyes to the cultures of my family and changed me for the better: I truly believe it left a mark on my memory, my consciousness, and of course on my heart. I will always have the memories of this trip to take with me, and I know I left a mark behind as well.
at November 19, 2018