Everything Happens for a Reason...Right?

Have you ever looked back on your life and wondered, "Why did that happen?"

A friendship that ended.
A decision that backfired.
A job that came to a screeching halt.
A big mistake.

We're told over and over that, "Everything happens for a reason" or that, "Everything is as it should be". And this is a great, positive mentality to have...most of the time. But do you ever just have one of those days where it all catches up with you and you demand to know, "Why"? 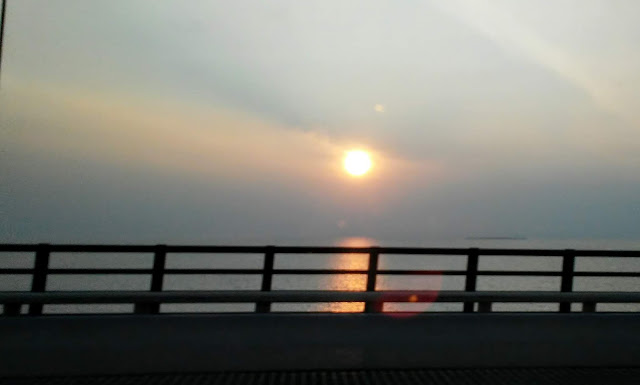 As many of you know, I moved to Michigan's UP in April of 2017. I left a well-paying corporate job, a short commute from my family, and a certain standard of living to go live in a very small town (population 2300). Why? Family friends who I'd known since elementary school were opening a church/coffee shop, and I thought it would be an amazing opportunity. After all, I had worked as a barista for nearly four years and had studied business in college, so when they offered me the role of General Manager of course I said yes. The small town was somewhere my family had vacationed every summer throughout my childhood, so it felt like a 'calling'. And since it was connected with a church, I was so sure there was some 'higher purpose': there had to be. So I put in my notice, packed up my U-haul (which was an adventure in and of itself), and moved to the UP. I was beyond excited.

The summer was a whirlwind: I helped them order (and build) furniture and equipment, went to the coffee supplier to taste-test different blends and choose our coffees, and even started interviewing and hiring employees to train. My family's friends knew nothing about coffee when everything was starting. I created the menus, the recipes, the processes, the order sheets, and organized everything to keep the shop running as efficiently as possible. It was an enormous undertaking, and I felt like my world revolved around the coffee shop. At the time, it was a dream.

At the same time, I got to know the people in town. I made friends with a fellow gym rat, met more friends at a bonfire she took me to, made even more friends at the gym and at the local bars, and yes, started seeing someone. And then another family friend who happened to be my age came to visit, and by some miracle she decided to relocate and work at the coffee shop as well. Everything felt like it was falling into place.

Three months after the coffee shop opened (nearly 7 months after I'd started working there), I was pulled aside and told there was no longer room for me in the budget. I knew the coffee shop had been struggling, but I never thought they would let me go. I was terrified. It literally came out of nowhere. I was so unsure of what to do. I had uprooted my entire life for this and they could no longer fit me in the budget? Couldn't they just de-mote me from General Manager to barista? Had I done something? What did this mean?

I'll be honest: I could elaborate on the transition from General Manager of the coffee shop to being unemployed to miraculously getting my old job back, but I'll maintain professionalism and just say It wasn't easy. I was incredibly thankful that my old company permitted me to work remotely while I finished out my apartment lease and waited on the Navy's decision. I still had my friends, and I still had a relationship. My parents came to visit occasionally, and there was even a surprise birthday party thrown in that made everything seem so wonderful at the time. It wasn't until my lease ran out, I didn't get into the Navy, and I had to move back to southeast Michigan that everything really sank in. 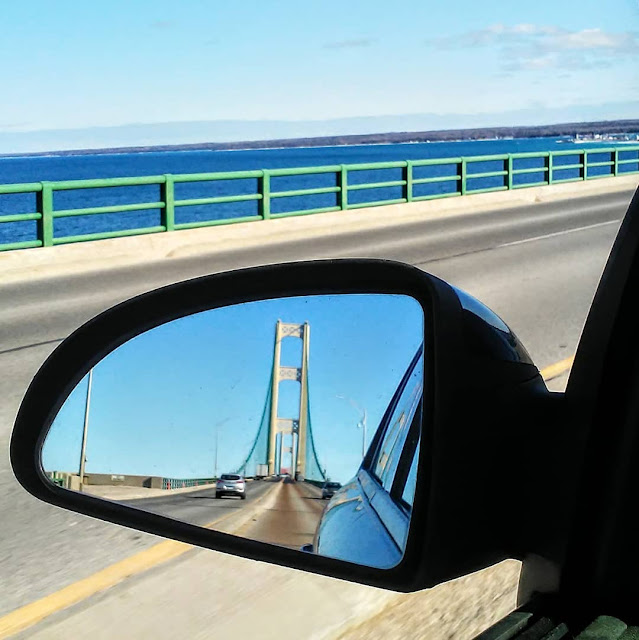 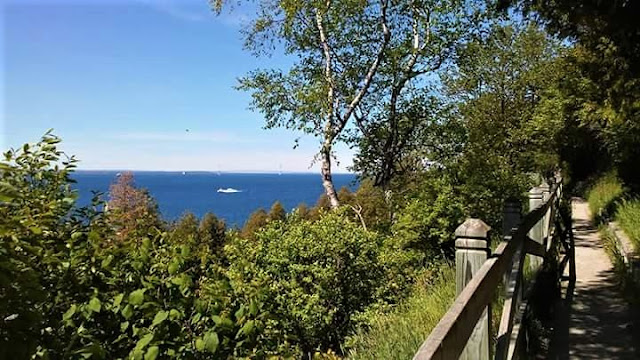 I love my life here, I truly do. I've found a great rhythm with work, I've gotten to know new coworkers who started after I left and have gotten back in touch with old coworkers who never left. I love my apartment and the fact that I'm so close to normal stores, living in a bigger city instead of living in the middle of the woods. And I especially love that I can get to my parents' house in less than an hour. I've started my Yoga Teacher Training and have started to make friends in my new city. I really can't complain: I'm happier than I've been in awhile.

So I have moments when I look around, living right back in the same 'neck of the woods' as I did before, back at the same job, back to the same routine, and I can't help but wonder, "What was the point?" I haven't talked to the coffee shop owners in nearly a year and my relationship is over. I still talk to a few friends I made up in the UP, but two of them moved to Iowa and another couple is touring the United States in their camper. There are no plans to go back and visit, and a town which once held great memories of vacationing with my family now leaves a sour taste in my mouth when I think about it. I spent nearly 16 months there: nearly a year and a half. So....why? 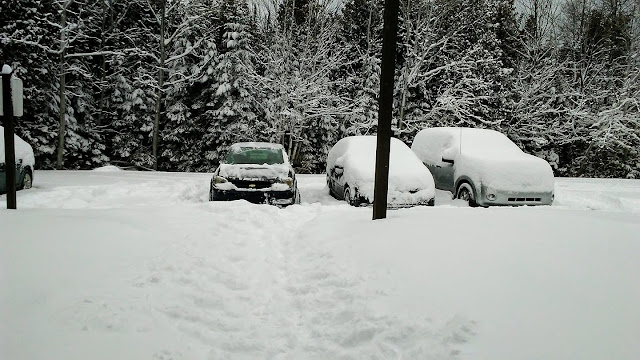 The truth is, we don't always know. We can't: we are only human, after all.

My mom has been one of those, "Everything happens for a reason" preachers as long as I can remember. (She's emphasized the point whenever I bring up this rant of 'why'?) The truth is, you never know who you left an impact on - or how powerful an impact was left on you. Frankly you may never find out. Looking back on the past year and a half, I know there are people who helped me to grow and evolve. I made some amazing friends and had experiences that taught me valuable life lessons. I wouldn't have the great memories of bonfires, fireworks in the driveway, late nights watching Game of Thrones, Saturday mornings spent tutoring, game nights, getting my second tattoo, touring the Coast Guard's Ice Breaker, Black Friday shopping with wine in to-go cups, afternoons spent at 'the Dunes', the experience of writing an entire novel, or nights visiting the local bars. I'm sure there would be other memories had none of this happened, but I can't imagine things being different. I wouldn't fully appreciate how lucky I am to [now] live in a big city or how nice it is to live closer to family. I wouldn't have learned not to take things for granted. 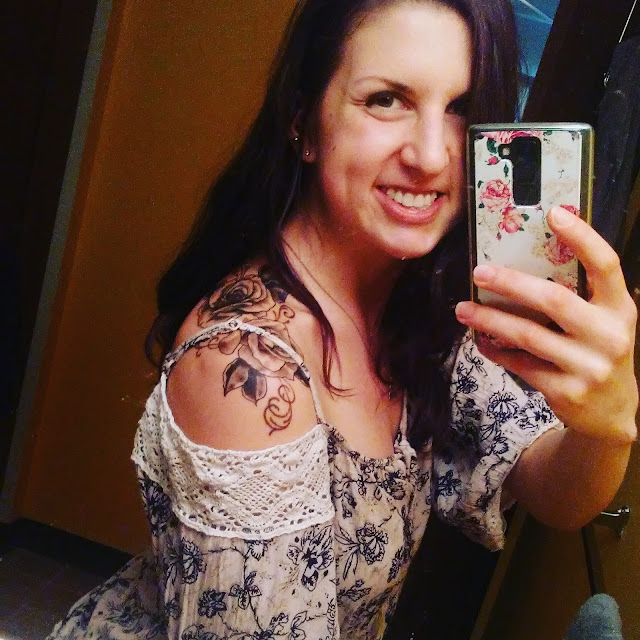 One of my favorite days, spent at Solomon's Tattoo Parlour 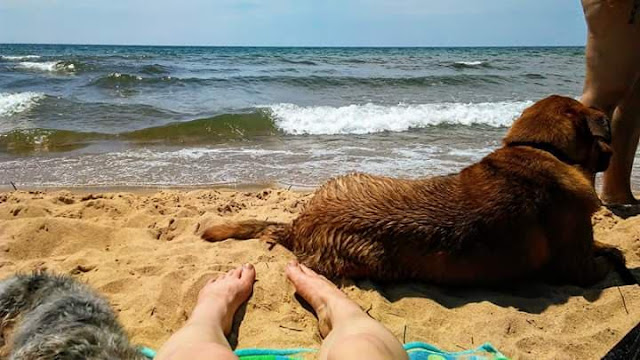 The Dunes, good friends, and cute pups
I might be in the same spot professionally and geographically as I was before the move, but mentally I know I'm completely different. It has really taken some reflecting to finally understand and accept that, but it is 100% the truth. Relocating, building the coffee shop, training employees, learning ordering/scheduling/inventory/payroll, getting established in a new town, figuring things out when my position was terminated, meeting new friends and navigating relationships, working remotely for the first time....I could have never imagined so much would happen as a result of moving to the UP. I may wonder 'why'? at times, but I know the town, the events, and of course the people there left an immense impact on me. I deal with setbacks differently. I approach new friendships with a new mentality. I appreciate the conveniences of living in a city and the time I do get to spend with family more than I ever have. Regardless of all the frustration, I do believe I needed it (at the time). I needed the place, the lessons, the people. It was a season of my life, but as with any season, it finally has come to an end. Its over.