The Travel Bug: One Day in Paris.

It felt like we had just gone to bed when the alarm clock started buzzing. 3:30am is not at all a pleasant time to wake up in the morning. But as soon as I was awake, my heart started racing. Today was the day.

Margaret was one of my flatmates in Dublin, and as a fellow blogger (also with a passion for travel), we'd grown quite close over the summer. There had been a day where we were sitting around the kitchen table with our other flatmates, just writing and chatting, and we all decided to book mini trips for the summer. I booked my trip to visit Cleo, another booked a weekend in London, and another booked a trip to Italy. I knew I wanted to try to get back to France since I was already on 'that side of the ocean', and was thrilled when Margaret expressed interest in joining me. It happened in the blink of a eye: we were going to Paris. It was difficult to coordinate the best weekend to go, as there were 'intern outings' with our entire group and other pre-planned adventures already filling our free time, but we finally decided to go on July 27th, 2014. It was the final weekend before our departure back to the United States, but it was the only day that worked for both of us. Day. As in, one day. A day n Paris. 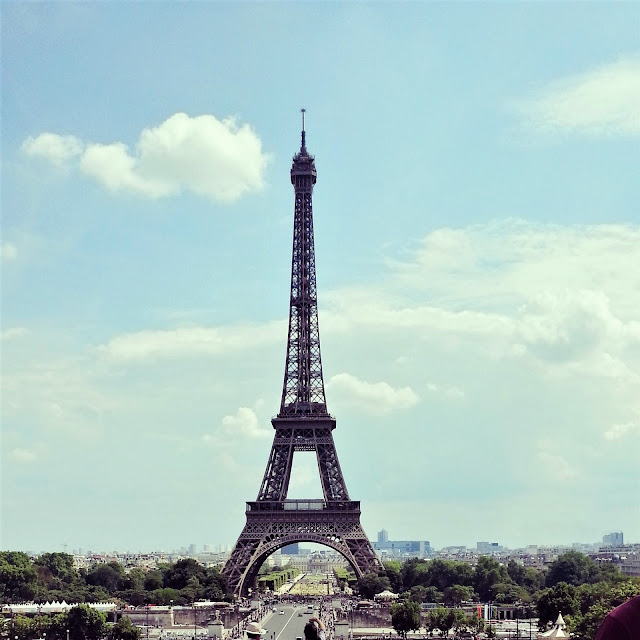 Conveniently, it was also the finale of the 2014 Tour de France, something I never thought I would be excited to see. My dad faithfully watched the race when I was growing up - every single year - and my siblings and I always complained when it was Tour season. It meant we never got to watch what we wanted to on tv for weeks, and we really didn't understand the draw to it. So I think he and my mom were somewhat surprised when I told them that I would be on the Champs-Élysées to see the finale of the Tour. (Surprised and somewhat jealous, if I remember correctly.)

The day finally arrived, and Margaret and I took a taxi to the airport. We were groggy but excited and completely ready for our day in Paris. We had both already been to the city once before, which made for a much more relaxed, much less expensive agenda. We didn't need to go into the Musée d'Orsay. We didn't need to go to the Louvre. We didn't need to take the stairs up the Eiffel Tower or take one of the 'Hop on, Hop off' sight-seeing busses. We just wanted to enjoy the beautiful summer day, see some of our favorite sites, enjoy delicious [vegan] French food, and see the finale of the Tour. We just wanted to enjoy the city. 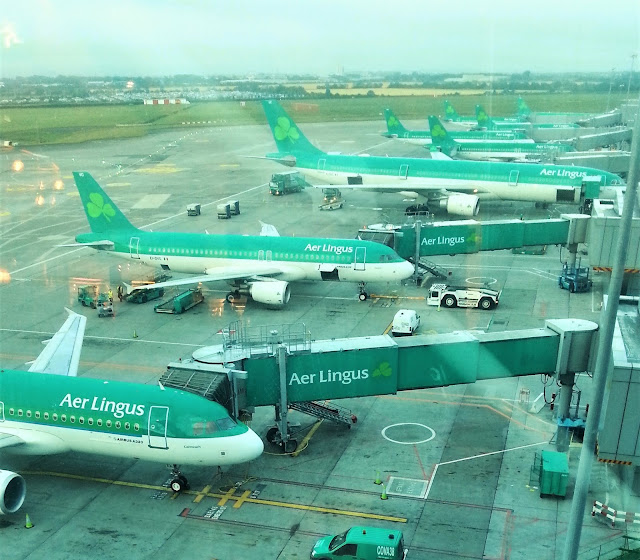 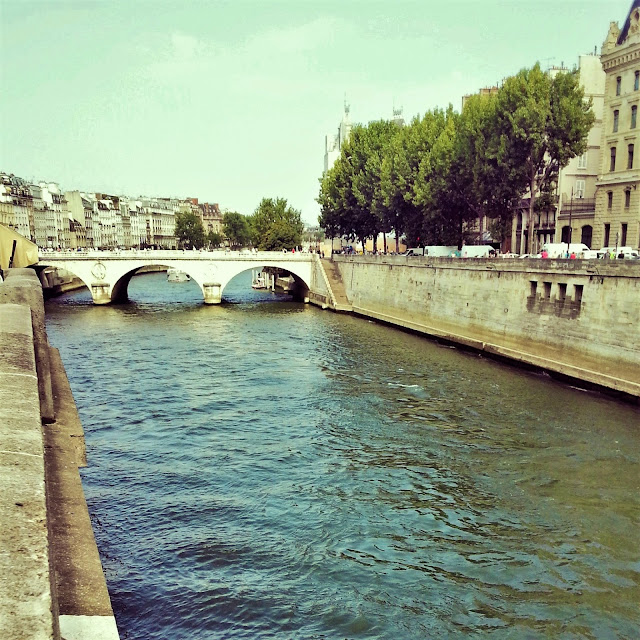 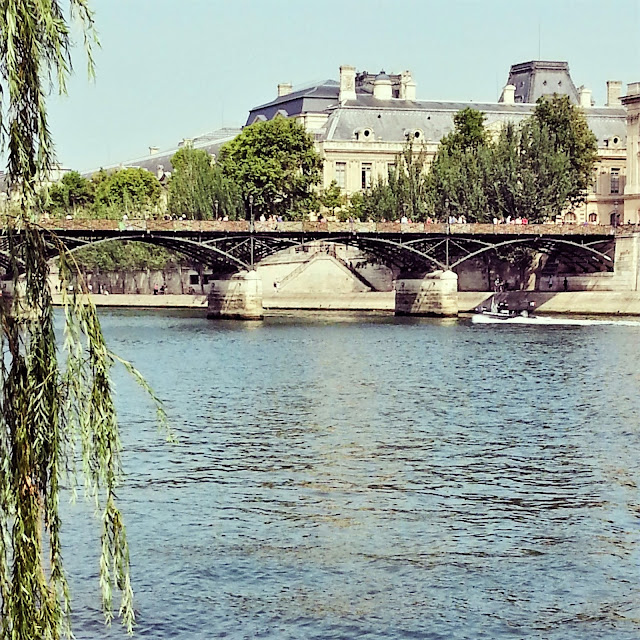 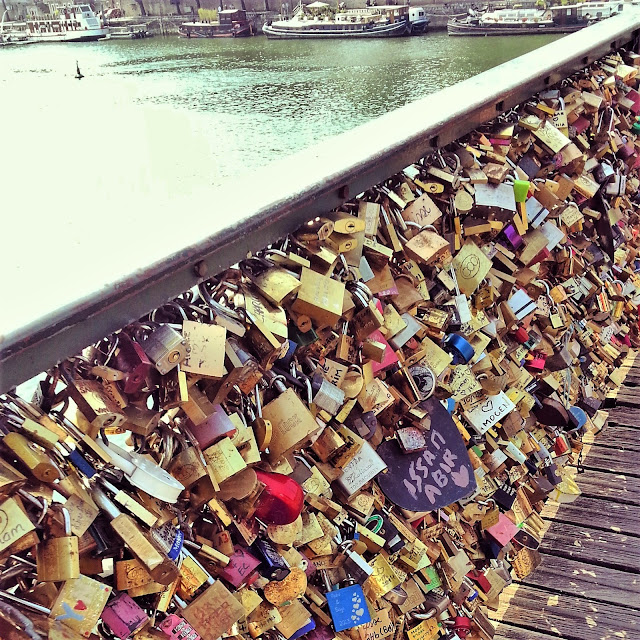 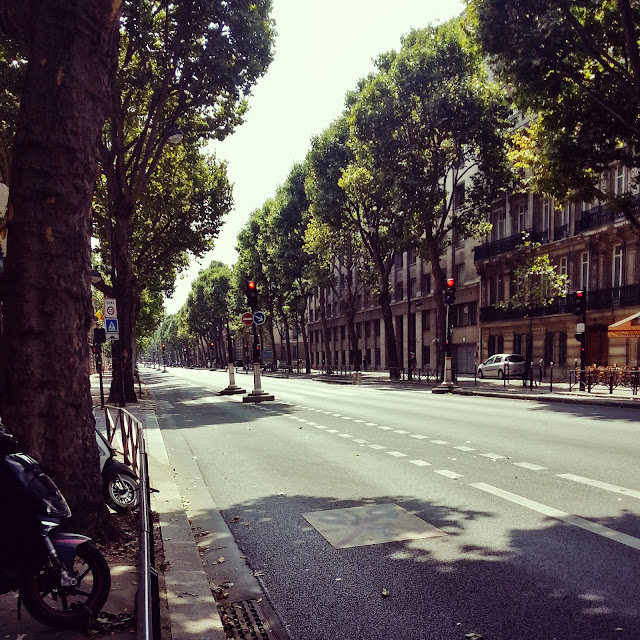 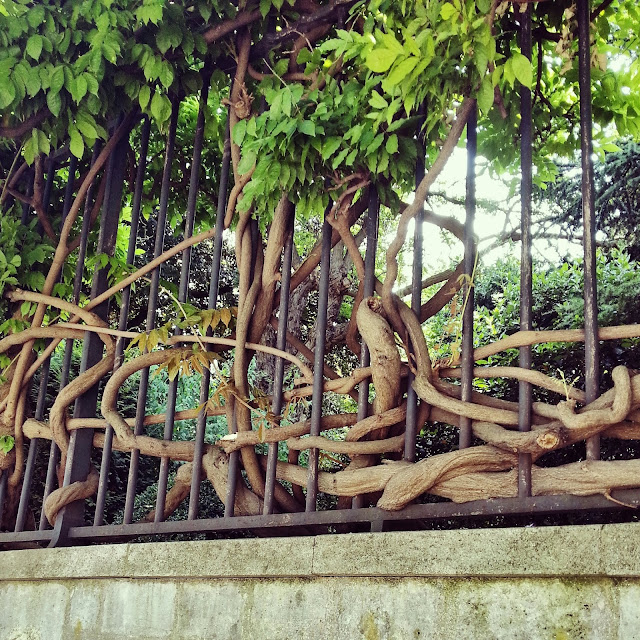 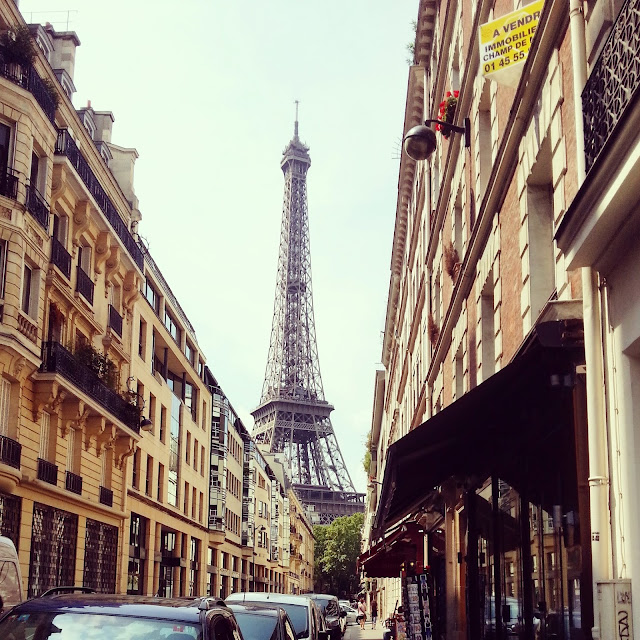 Leisurely strolling through the streets of Paris with no agenda was one of the most amazing feelings I've ever had. Its a feeling I try to find in strange new cities every time I travel, and is hands-down the best way to experience any new place. It lets you appreciate the small details more: the smells outside bakeries, the people sitting outside at cafes, the background conversations, the different styles of cars, the architecture...all things you might miss powering around trying to follow a strict agenda. And Margaret was right on the same page: she was (and still is) very passionate about photography and was snapping away left and right as we wandered along. I loved the fact that my other flatmates blogged as well. I feel like we all shared this innate curiosity for new places, new people, and new cultures. So there we were, two girls who had known each other less than a summer, feeling like best friends as we explored the streets of Paris.

We walked along the Seine, taking in the monuments and 'popular stops' as we passed them, soaking in everything from the architecture to the crowds of tourists. Eventually we made our way to a little cafe called the Le Royal Orsay, where we had an amazing lunch of crepes (for her) and a vegan sandwich (for me). I loved having the opportunity to use my French language skills, and felt a little spark of pride as I ordered my lunch en français. 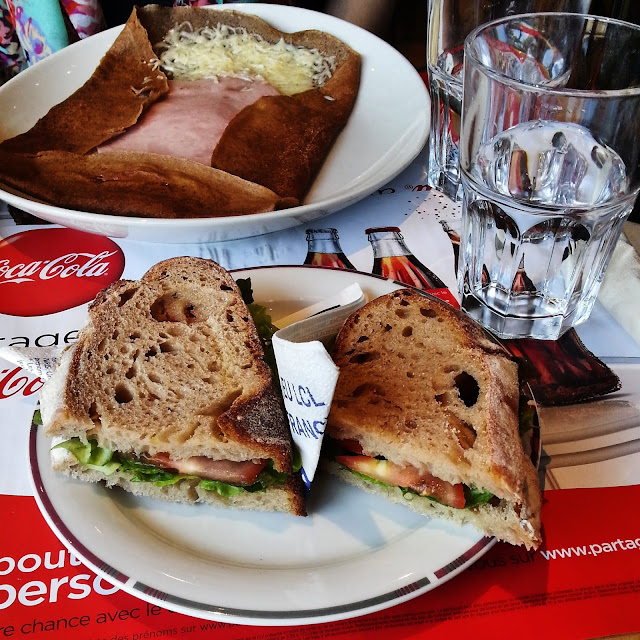 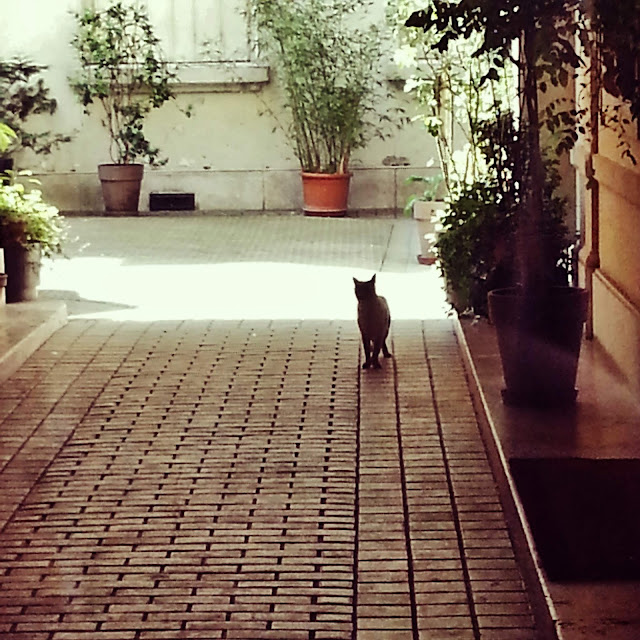 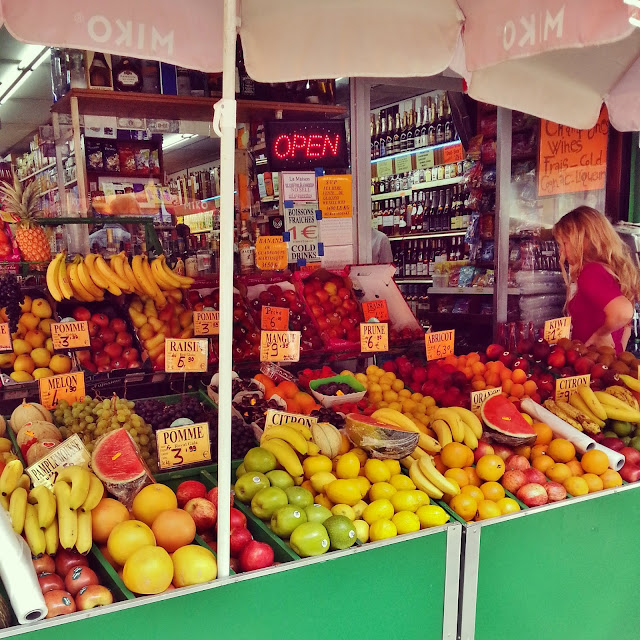 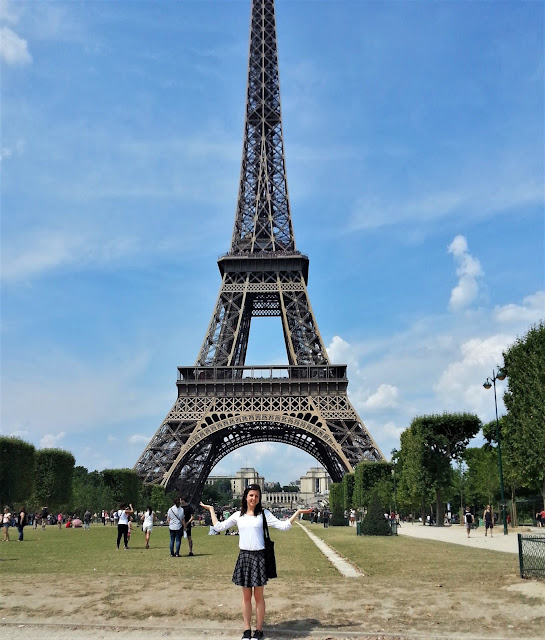 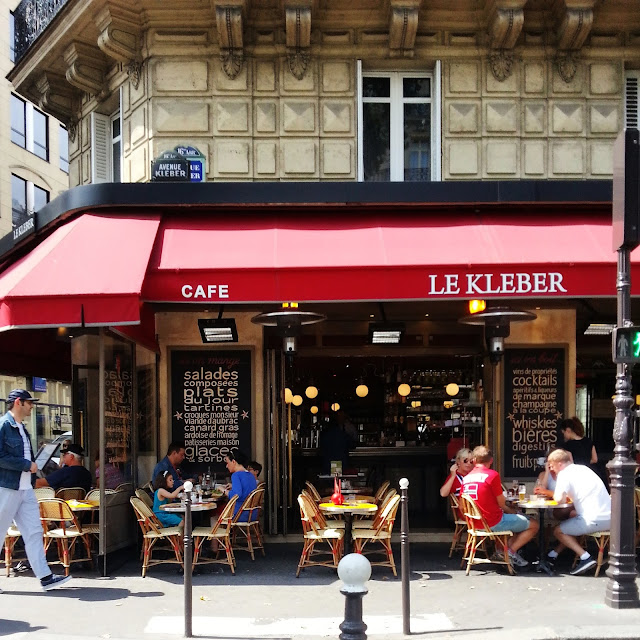 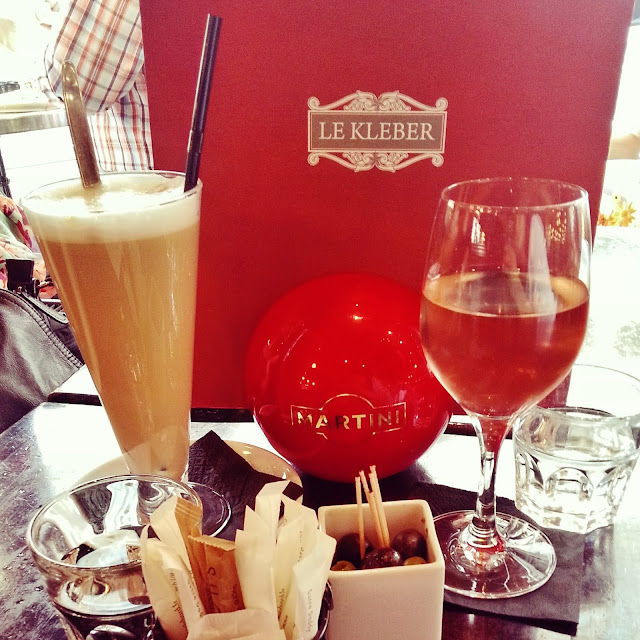 By the time we reached the Champs-Élysées, we were exhausted. We'd walked, talked, ate, drank, and thoroughly enjoyed the city. It had been such a wonderful day in Paris so far...it was hard to believe there was still more to see! The area around l'Arc de Triomphe (the big archway at the end of the Champs-Élysées) was absolutely packed with people. Vendors had their tables set up, selling everything from Tour de France t-shirts (yes, I bought one for my dad) to bright yellow bracelets to teddy bears wearing jerseys. People crammed along the cobblestone street, waiting for the bikers to come through. And it was sooo hot - we even saw ambulances and medics attending to people passed out along the sidewalk, friends and family watching in horror as they tried to fan them back to life. It was simply chaotic.

We had about 45 minutes until the bikers were due to come through, so we found a shopping center off the main street and spent the time browsing books and macaroons. Margaret picked out a few (none for me - not vegan) and I bought a copy of Le Petit Prince. After a quick bathroom break, we found our way back outside, back into the chaos. The bikers were coming. 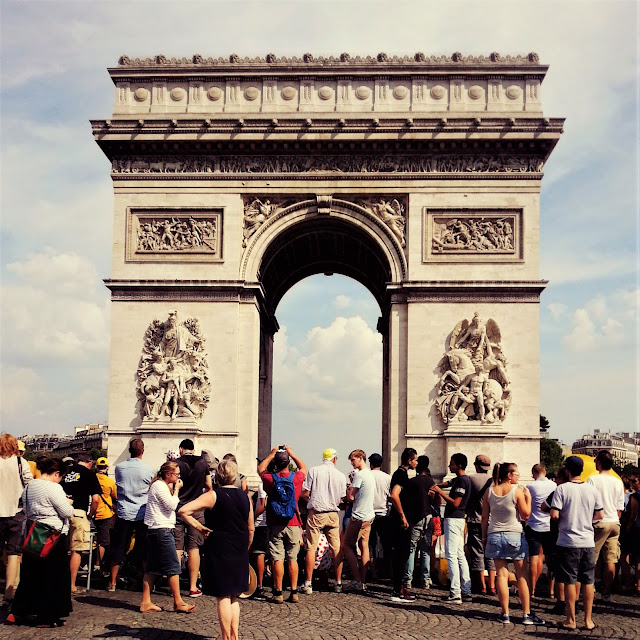 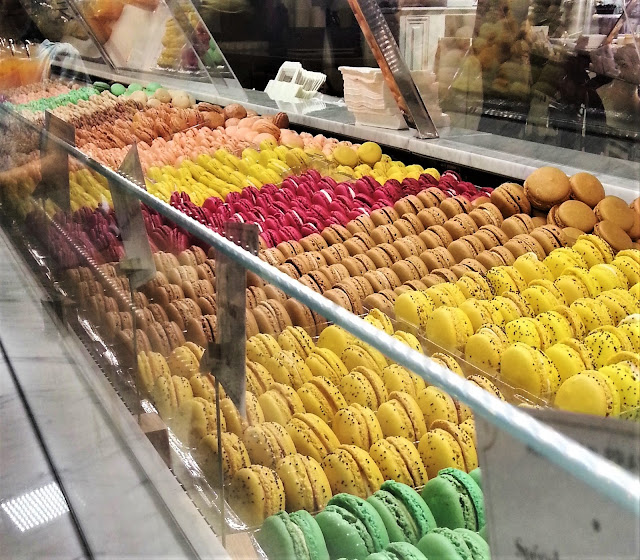 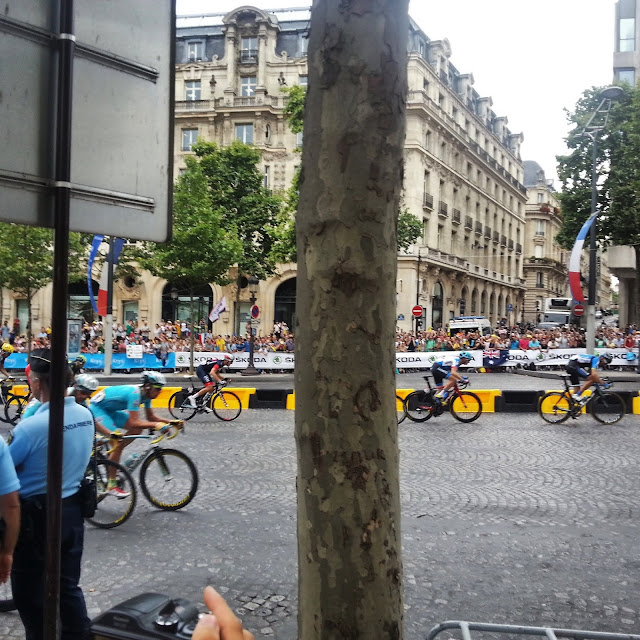 There they are! Trickling in at first... 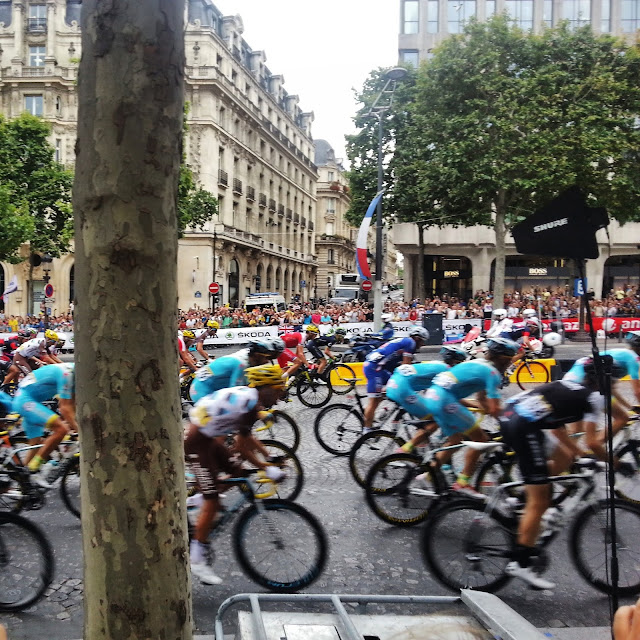 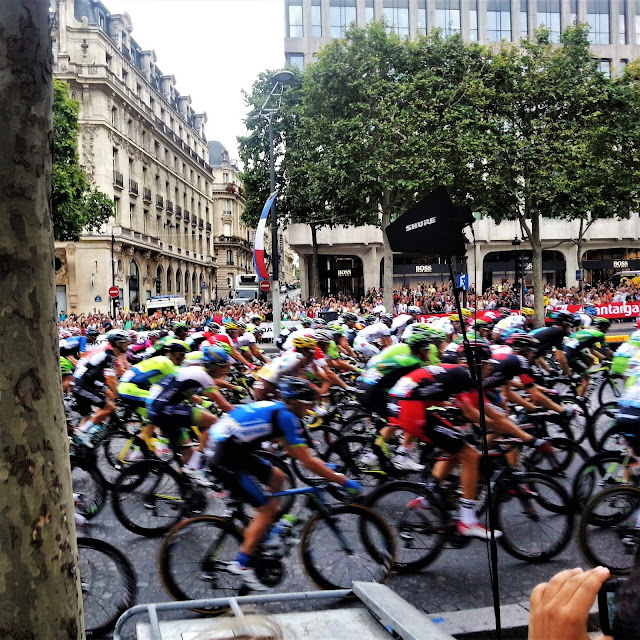 ...and the entire group, flying by
Being so close to the bikers was incredible. I took as many pictures as I could before my phone started to overheat, and believe it or not these were the least blurry of all of them. I finally understood why my dad loved watching the Tour so much: its just unreal! The bikers were going so inhumanly fast; it was impossible to believe they were all going at such a high speed without crashing into one another. Not to mention the rough street and curves in the road...

We stood and watched for awhile before heading back to the metro station. We knew we wouldn't be able to stay for the very end as we had to catch our flight back to Dublin, but enjoyed the portion of the race we did get to see. As we headed back to the metro, we really didn't talk much: we were tired from walking so much and having been up so early, distracted by everything we'd seen and experienced that day, and well aware that this was our last 'big weekend' before heading back to the United States the following Saturday. It was a mutual mood: exhausted but completely satisfied. I'd even say it was emotional, heading from the metro to Charles de Gaulle. I wasn't ready to go back to Dublin yet. I wasn't ready to head home. 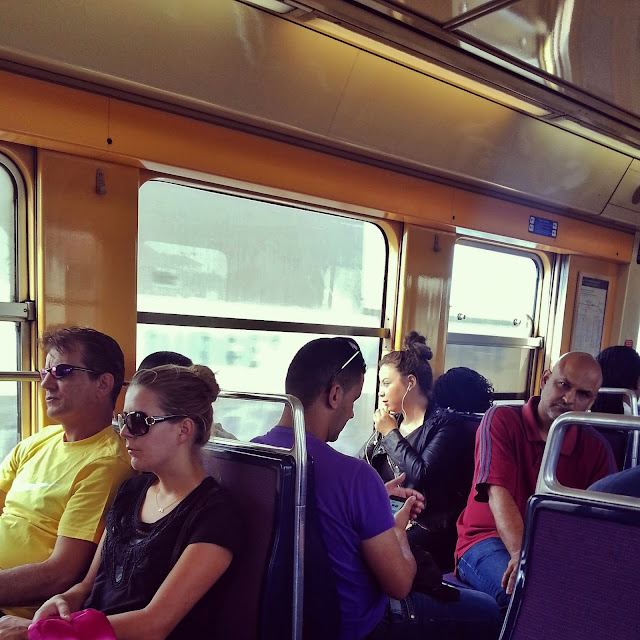 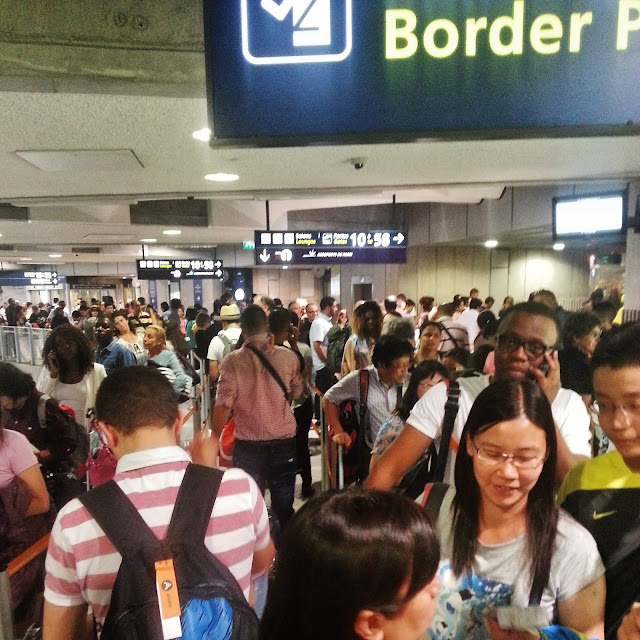 When we finally got back to Dublin, it was nearly midnight and pouring rain. We took a taxi back to the apartment, where I barely had enough energy to change into my pajamas and climb into bed. We had been in Paris for less than 24 hours, but it was one of my favorite days of the entire summer. I was so thankful that Margaret and I had been on the same page all day: we didn't want to be complete tourists. We saw everything we wanted to, relaxed at little cafes for lunch and drinks, and saw the end of the Tour. It was absolutely incroyable.

Ever since my first French class in high school, Paris has been a city I've loved, and one I'm sure I will get back to one day in the future. Throughout my 10+ years of studying French, I've just had such a connection to the language, culture, history, and architecture. Visiting Paris in high school, then continuing to use the language, and coming back during my summer in Dublin have given the city (the entire country, really) a truly special place in my heart. And as Audrey Hepburn even said, "Paris is always a good idea". I couldn't agree more.
at October 03, 2018