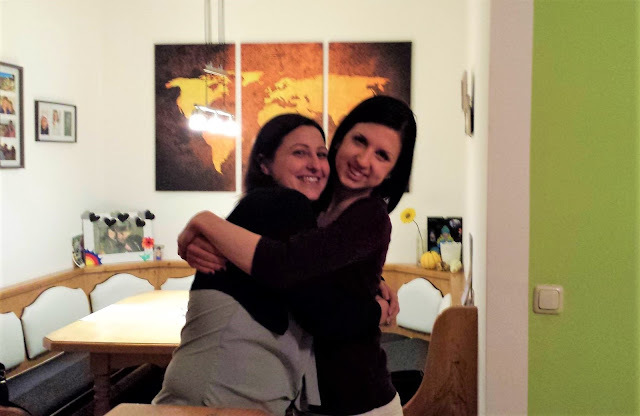 Sitting on the train heading from Kristina's little town in Bavaria to Munich was one of the most nerve-wracking experiences of my life. Not only was it the first time I'd taken a train by myself, but it was also the first time I'd ever had to navigate a train station without any help. I had roughly 15 minutes from the time I arrived in Munich until the time my train for Salzburg would be leaving, and after my and Kristina's escapade missing our train in Garmisch-Partenkirchen, I felt sure I was going to fail. The train pulled in, I hopped off, and was instantly swept up into the crowd. The train station was enormous, and for an American who had never needed to navigate a Hauptbahnhof before, it was mildly overwhelming. 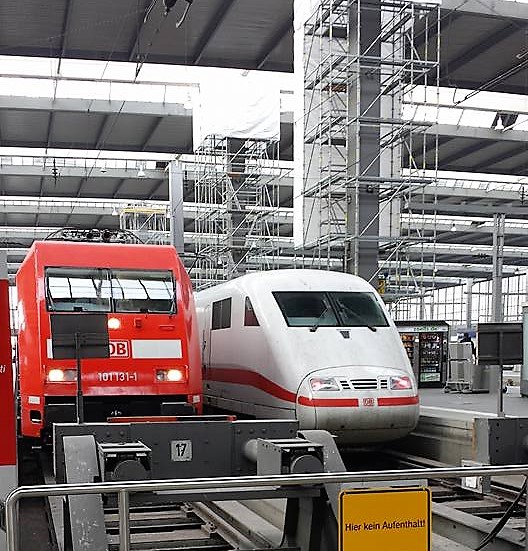 I found someone near what I thought was my platform and asked in my very best German if he could help me. He responded without blinking an eye (also in German) and I was surprised to understand everything he said (so thankful for those three years of German in high school!). My train was the next platform over, and I was boarding in no time. It was a bit difficult to find a seat (apparently you can 'reserve' seats, which I had failed to do), but a young woman scooted over and let me sit with her for the duration. I sat down and got comfortable. Just a few hours until I'm in Austria!

After a nap, the train came to a stop and I was soon navigating the Salzburg Bahnhof to find Theresa. We had agreed to meet out front, and I made my way quickly through the station. There she was, standing by the doors, and we both smiled as we saw each other. I was overcome with the same rush of familiarity I'd had when I first saw Kristina at the airport: we were old friends, not separated by thousands of miles, and were going to have a great time together. We hugged, we started chatting, she helped me buy a bus ticket, and we headed out.

That first evening in Salzburg was a blur. Theresa and I took the bus from the Bahnhof to her apartment, where we sat for awhile catching up (as old friends do), drinking tea, and discussing our plans for the week. It was already fairly late in the day, so we decided to do a quick walking tour of Salzburg and re-visit places of interest the next day. There was snow and slush on the ground as we powered through the streets, but my head was buzzing with excitement and my heart was warm. Salzburg was beautiful. 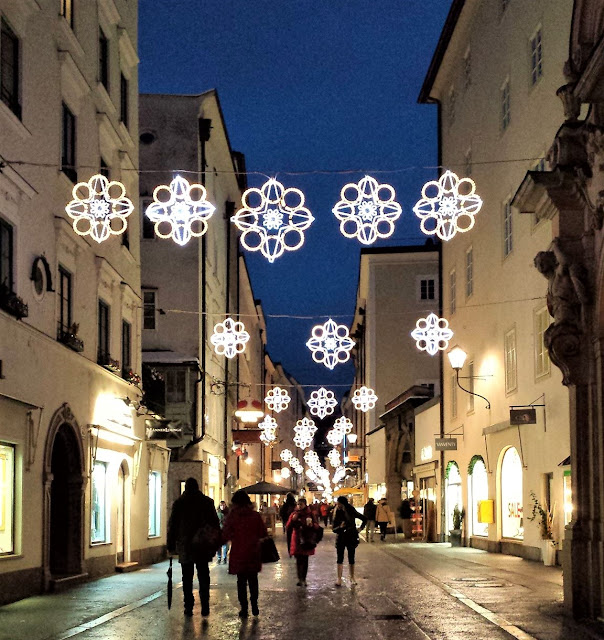 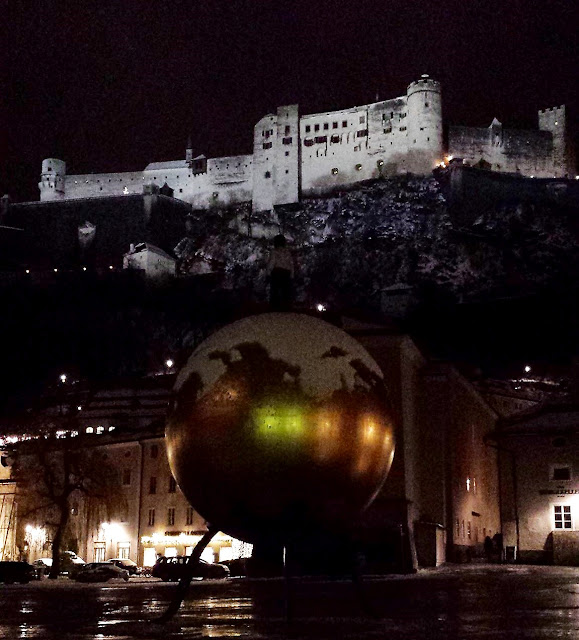 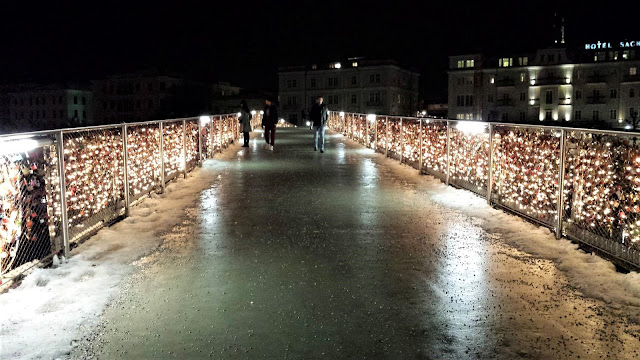 She pointed out certain castles and other historical buildings here and there, went into detail of their history, and even pointed out Mozart's Geburtshaus - that is, the place where Mozart was born. I was amazed with the amount of store fronts that were just dripping in Mozart-themed goods: chocolates, dolls, music boxes, ornaments, and even painted eggs. I knew he had come from Salzburg but I definitely was not aware of their pride in him! 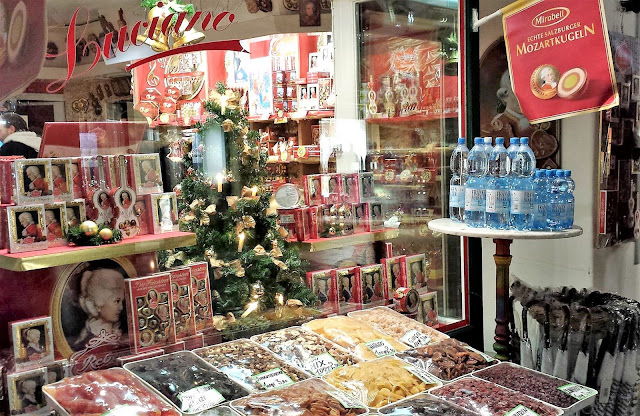 Because it was already nearly two weeks after Christmas, the Christkindlmarkt was already packed up and finished for the year. However, as Theresa and I walked around there were still a few small stands selling the large cookies, Christmas knick-knacks, and homemade goods. We also found a Starbucks, so naturally I bought my 'Salzburg' You Are Here mug and was thrilled to have found it so easily. Then we continued walking, and came across a stall selling Gluhwein. As we were both chilled to the bone it sounded (and smelled) like a great idea. 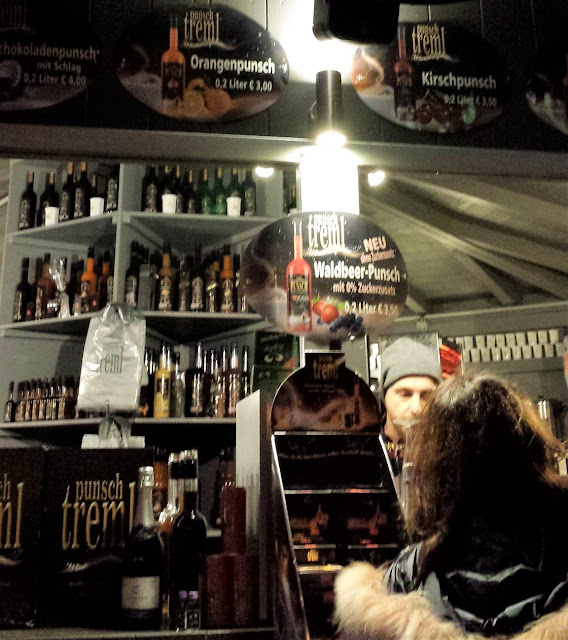 I slept like a rock that night. It took awhile to register that I was actually in Austria and it wasn't just a dream. Yes, I had just graduated college. Yes, I had just spent an entire week in Germany with Kristina. Yes, I was actually in Theresa's apartment, and the next few days would be spent exploring Austria. It was such an amazing feeling, especially after working so much and so hard during the semester to get there. There's a quote, "Dreams don't work if you don't." and I couldn't have agreed more as I fell asleep that night.

The next day, we had a change of plans as we decided to visit Theresa's parents instead of exploring Salzburg. There was a huge Skispring event going on in Bischofshofen, and she wanted to take me to see what it was all about. We'd spend a few days there before coming back to Salzburg, and could explore the city then. I was excited to see yet another city!

A train took us south into the little mountain town of Goldegg, where we'd spend the next two or three days. We drank tea with her parents, I got to try homemade Gemüseschnitzel (basically battered and fried vegetables), I learned a great deal about Krampus, and we marveled at how cute Jon Bon Jovi was, and still is (she had a calendar of him in her bedroom). The night before the Skispring event, we met some of Theresa's friends to go to a giant celebration that was happening in Bischofshofen. It was a sort of 'amp up' to get everyone excited for the next day, when the Ski jumpers from every country would be sailing down the mountain. I found the sport extremely entertaining: basically people used the shape of their body and the skis to sail like flying squirrels down the slope, and where they landed determined their score. At the event the next day, they didn't even look human when we saw them in person. It was just incredible! 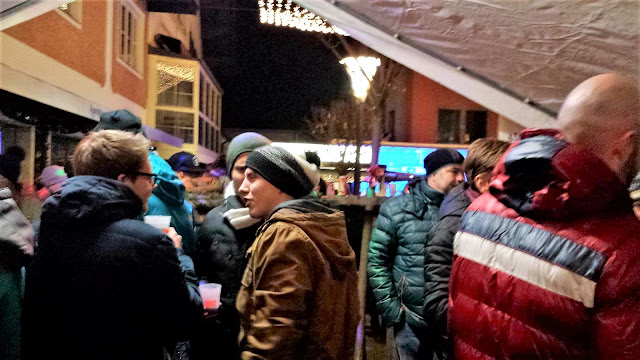 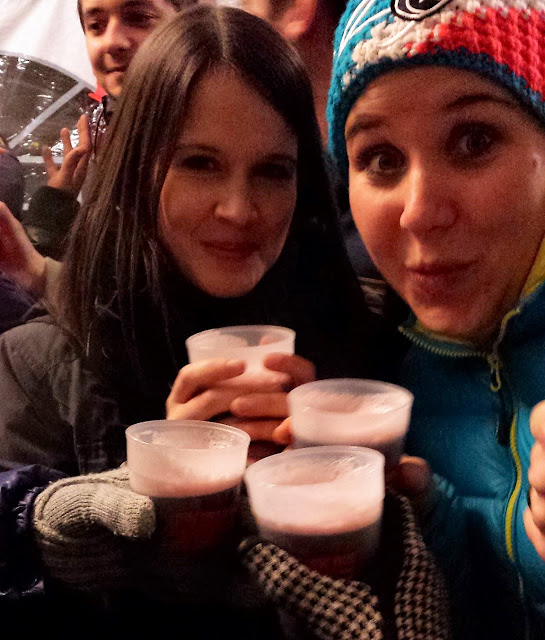 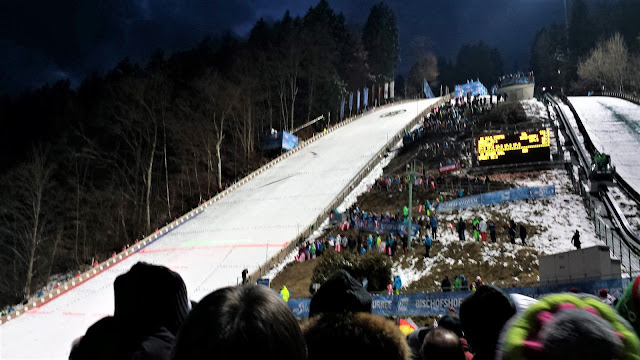 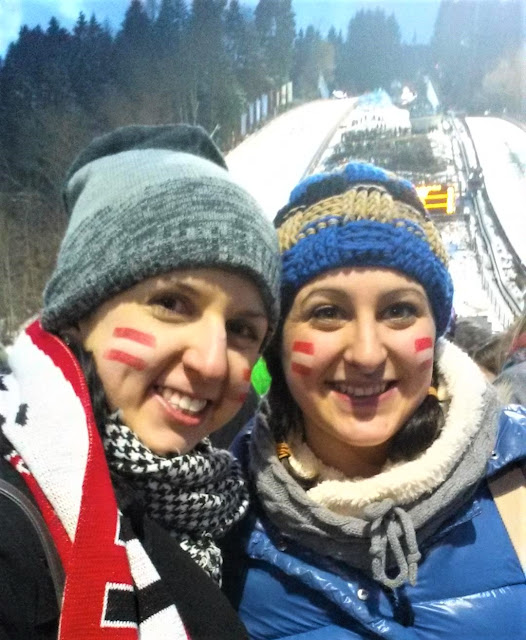 Admittedly, we didn't stay very long at the event because it was freezing (people were standing on cardboard boxes to keep their feet warm!), but I was so glad we got to experience it. We came home exhausted, frozen, and slightly buzzed, but it was well worth it.

We had finally thawed by the next morning, but it was time to bundle up and head out again. Theresa wanted to take me to a ski lodge in the Alps that she had visited several times throughout her childhood. From what she described, it sounded beautiful. And I was willing to go check it out, given we dressed a bit warmer than the day before. Fortunately, Austrians keep plenty of warm 'snow clothes' on hand, so we were soon bundled up and ready to enjoy our day in the mountains. 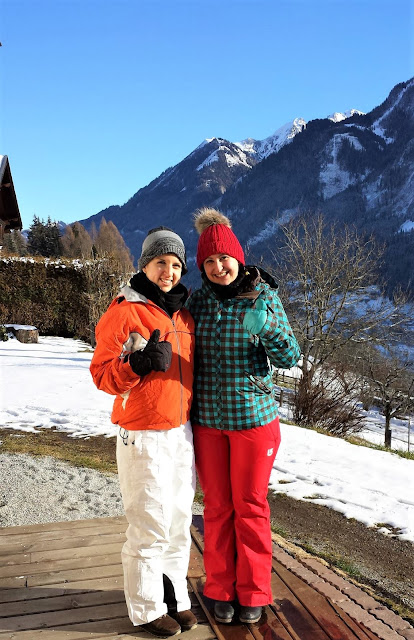 Much, much better and ready for the Alps! 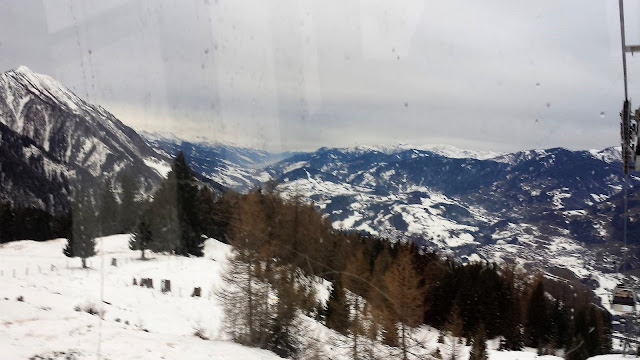 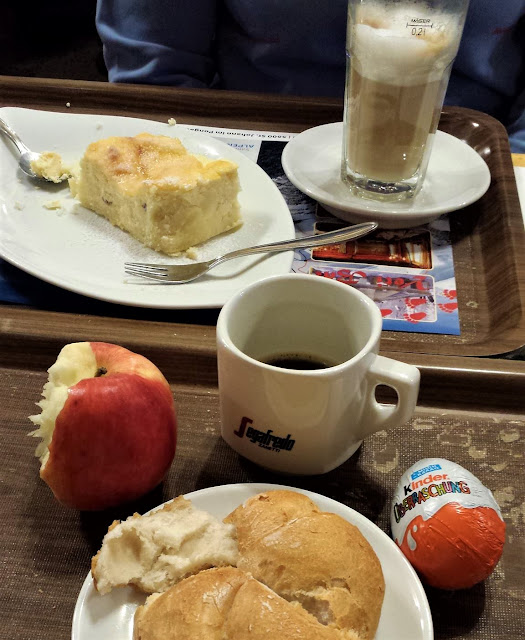 This was a trip full of carbs & coffee
The view was absolutely incredible. I was taken back to New Year's Eve when I was on top of the mountain with Kristina, feeling like I was on cloud 9 and on top of the world. There was nothing remotely close to that view in my home state of Michigan, and it just gave me a new appreciation for how big the world is and how small we truly are. The mountains seemed to go down forever, and off in every direction as far as the eye could see. I had no desire to go down on skis of course, but soaking it all in from the top was breathtaking. 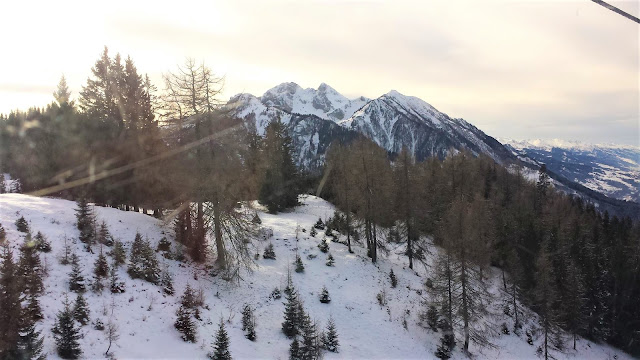 The rest of the day was spent preparing to head back to Salzburg. I was so thankful we'd had a change of plans and came to Goldegg: it was a much more culturally intense (and far less touristy) way to experience Austria. I also felt like I got to know Theresa better, meeting her family, her friends, and her boyfriend, which might not have happened had we stayed in Salzburg. And of course the Skispring party and event in Bischofshofen were pretty fun, too.

Over the next few days, we thoroughly enjoyed our time together in Salzburg. We walked over the "love lock bridge" (similar to the one in Paris), went to a Kid's Museum (because you're never too old!), and on the last evening, we met a good friend of hers to go wine tasting. Matthias, Theresa, and I walked to three or four wine bars, trying whites and reds and all kinds of bread, olives, and charcuterie. It was such a lovely evening, and the best way I could have thought to end my trip to Austria. 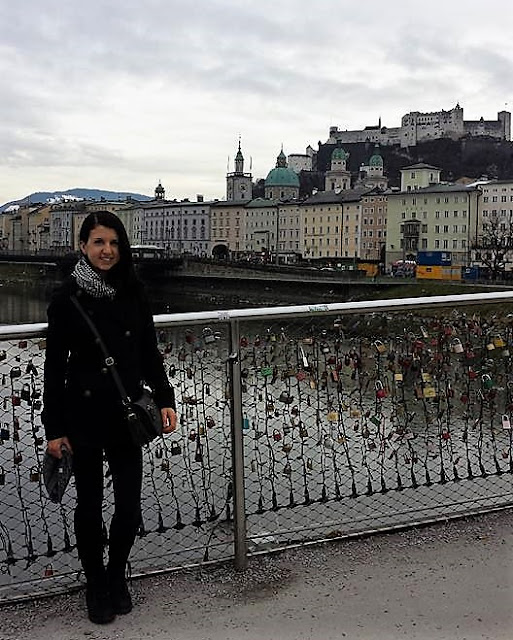 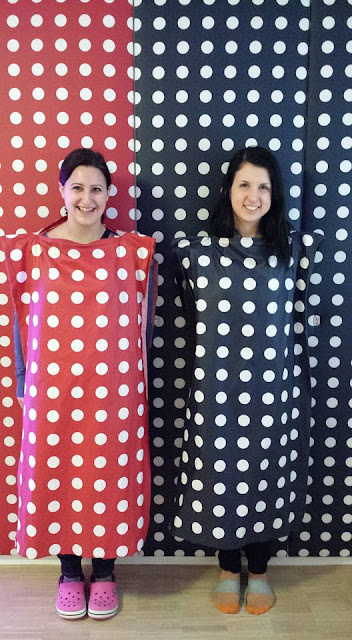 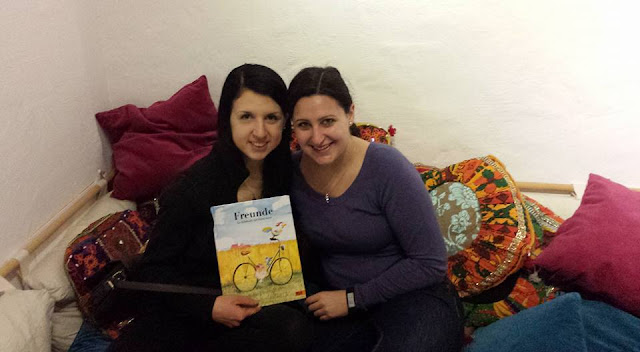 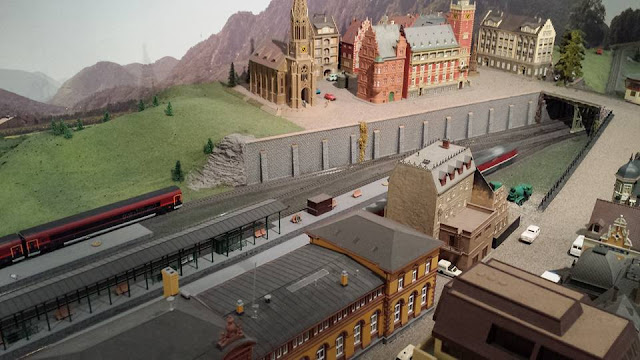 This was just one part of an entire room of trains! 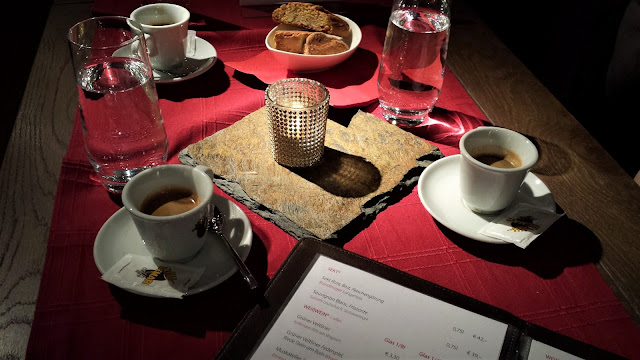 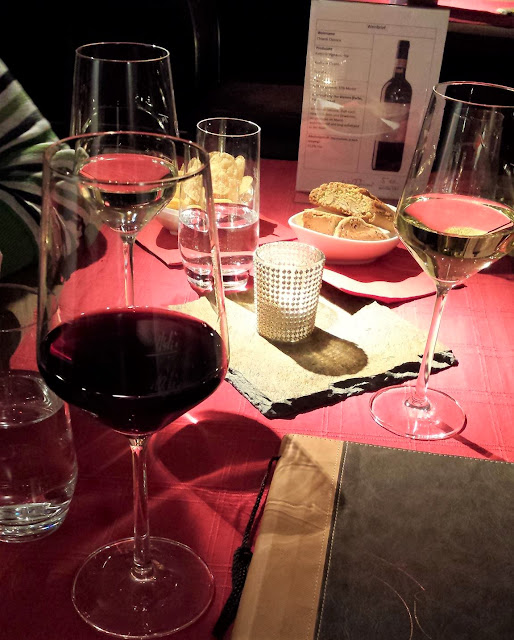 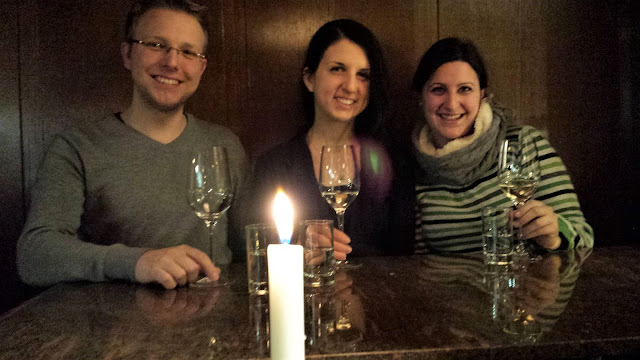 The next morning, Theresa drove me to the airport in Munich. The week in Austria had gone by far too quickly, and we were both tearing up when it came time to say good-bye. It had been such a wonderful, enjoyable, and yes - freezing - week, but I was so glad it had worked out to see her. Coming back to the United States, I had no idea when I might see her again. I had no idea when I might see Kristina again. Or Matthias. Or anyone else that I had met during my time in Europe. But I still consider them to be close friends, no matter how far apart we are or how much time passes between visits.

Having friends around the world isn't easy. But I think they can be some of the closest friends you'll ever make. When you meet someone in another country, your friendship becomes more than just the standard "we have xyz in common, and we live somewhat close and can hang out often." Its a finding of common ground of course, plus a cultural exchange. And then there's a commitment that transcends thousands of miles. Of course letters and social media make it somewhat easier, but there's still a bond that's hard to explain, and is hard to find anywhere else.

I'm so thankful I had the chance to take this post-grad trip. All of the hours at Target, at my computer finishing my internship, working on homework between customers or assignments...it all paid off in the end. This trip added a new appreciation for travel, and the friendships that can be made along the way. I had only spent time in the office with Kristina and Theresa in Dublin, and here we were a year later exploring their hometowns and feeling like old friends. And once again, I had a feeling I'd be back. I just knew it. And I couldn't wait for whenever and wherever that might be.
at October 21, 2018