I graduated from Minnesota State University in December of 2015. That final semester was by far the busiest and most stressful of my entire college career, but everything was well-worth the post-grad trip it allowed me to take. As I mentioned in my Ireland post, I made great friends with Kristina and Theresa, two other interns at my office in Dublin. That had been the summer of 2014, and we managed to keep in touch since returning home. So the following summer, when I started another internship in Portland, Oregon, I decided to start saving heavily for a trip back to Europe. I wanted to go back and see my friends, and nothing was going to change my mind. I saved as much as I could during my internship, and was thrilled when my manager asked me to continue working for her remotely from my dorm in Minnesota. I set up my laptop and logged in daily to help the sales and marketing team I'd been on during the summer. I worked for her nearly 20 hours/wk, in addition to a full load of classes and my part-time job at Target. (I say part-time, but I worked 30-40 hours/wk, taking early shifts before work or doubles on the weekend). I didn't mind the packed schedule: it was only a few months, and I'd get to see Kristina and Theresa again. The day I finally purchased my flight was the most exciting day of the semester, possibly even more exciting than walking across the stage on graduation. I was officially going back to Europe! 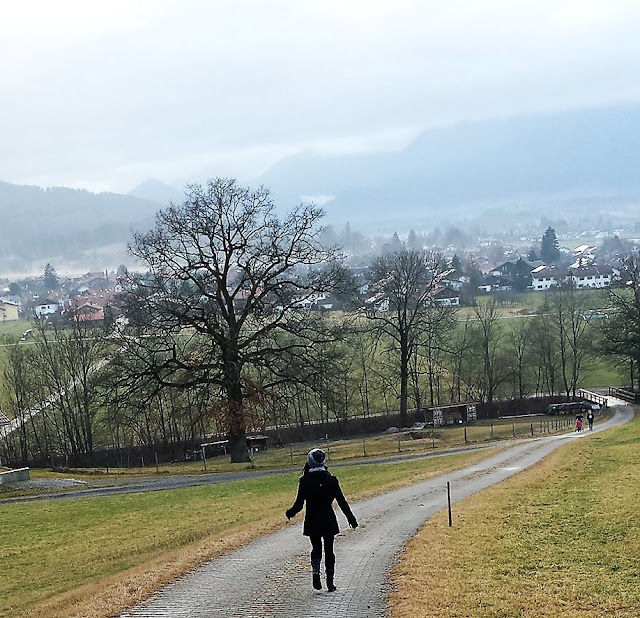 I would visit Kristina first in Bavaria (Germany). We would spend a week together after Christmas, ringing in the New Year together, and then I would take a train to see Theresa in Austria. I would spend a week there as well, explore Salzburg and Bischofshofen before finally flying home. When the time finally came to receive my diploma, I could barely concentrate on the fact that I was done with college. Europe was only 10 days away!

I spent Christmas with my family, moving back to my parents' house until I could find a job and an apartment, and took off for Germany on December 27. It was such an exhilarating feeling, and when my mom dropped me off at the airport I could hardly process what was actually happening. I had been planning, saving, preparing for this trip for months and here it was. I checked in, went through security, and found my gate. And before I knew it, I was on the plane and on my way back to Germany. When I finally got to the airport, Kristina was waiting for me and I nearly tackled her, we hugged so much. Was this real? Was I actually back in Europe? 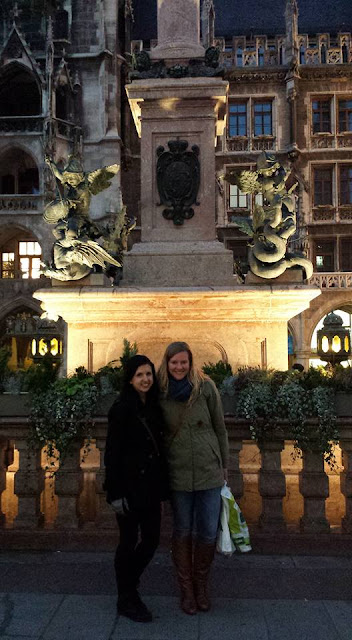 Every conversation Kristina and I had since our summer in Dublin had felt like old friends just talking. So meeting her at the airport, where we stopped at a little cafe for coffee before heading to her town, felt so incredibly natural. It was as if I was going to visit a friend I'd known for ages. We quickly transitioned from "Oh my gosh, it's so good to see you, how was your trip? How are you?" to typical girl chat like, "So how is the man in your life?" It was so nice to be together again, and we knew it was going to be a very fun week.

Over the next several days, Kristina and I grew closer than ever. I met her sister and parents, who quickly made me feel like I was another daughter. We talked (them in broken English, me in broken German, and somehow it worked), enjoyed delicious bread and pretzels from the bakery her mother worked at, and had the most amazing coffee in little German coffee mugs. Kristina and I stayed up late that first evening, drinking tea and watching Nicholas Sparks movies while catching up on everything going on in each others' lives. (We share a common appreciation for his stories and of course the actors in his movies...) Kristina had put together a little guest room for me, and when I went to bed that first night I found a little pair of warm, Bavarian wool socks waiting on my bed. It was the end of December, after all, and I truly appreciated their thickness and warmth. 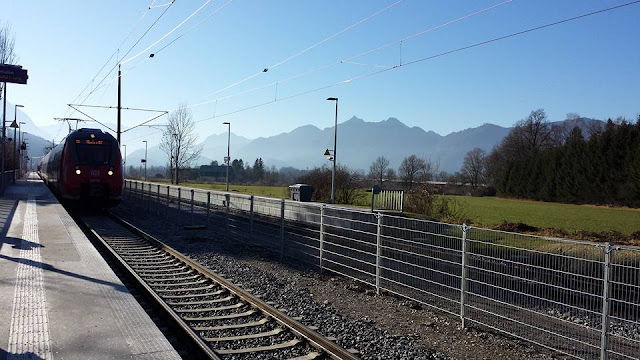 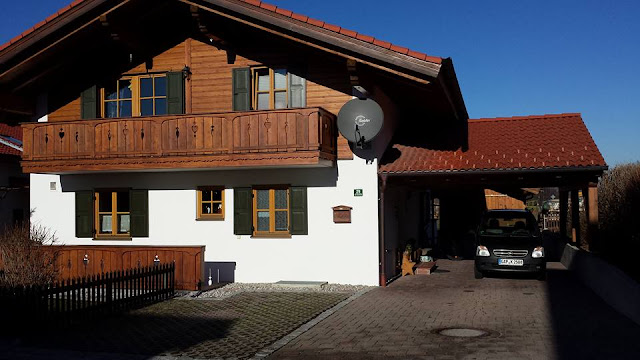 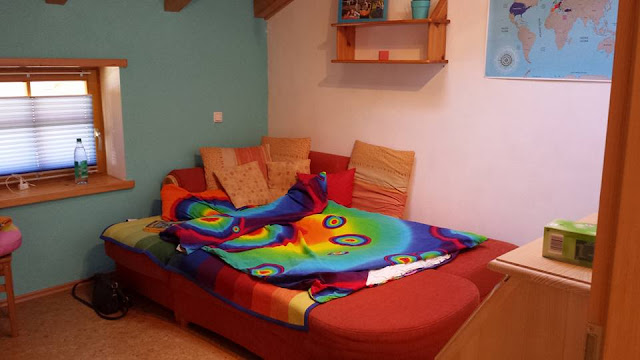 The next few days were a blur. Kristina and I went to Garmisch-Partenkirchen and Munich to do some shopping and to see the city, walking around the busy city centers with the smells of roasted nuts and bakery goods wafting through the air. In G-P we found little shops selling homemade wares, clothing stores, and a little cafe for lunch. Then in Munich there was a giant ice skating rink in one area, and street vendors selling Christmas goods in another. On the way home, we had to switch trains and missed our connection, so we bought wine at the convenience store there and spent nearly two hours waiting, drinking, and talking until the next train came. It was not an ideal situation at the time, but without a doubt is a memory we both look back on fondly and laugh about. Two girls stranded in a train station with nothing but time and wine... 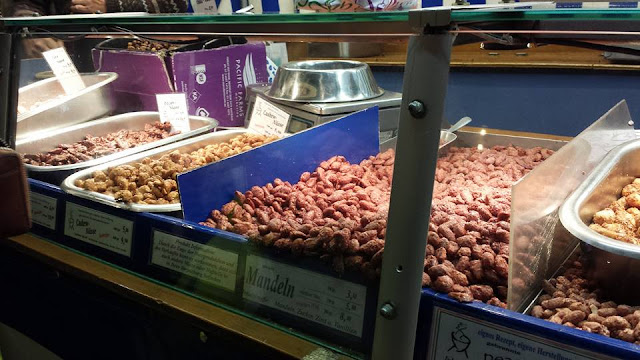 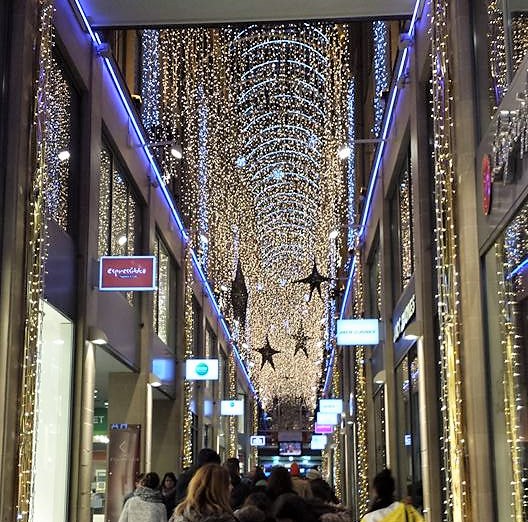 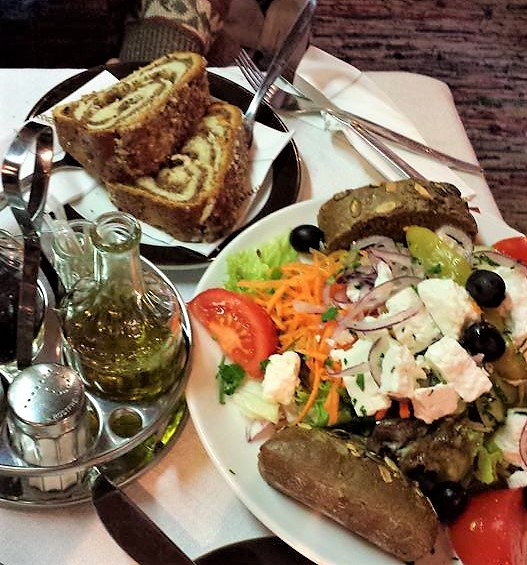 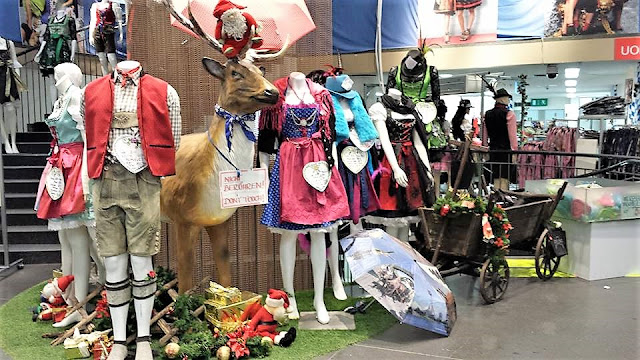 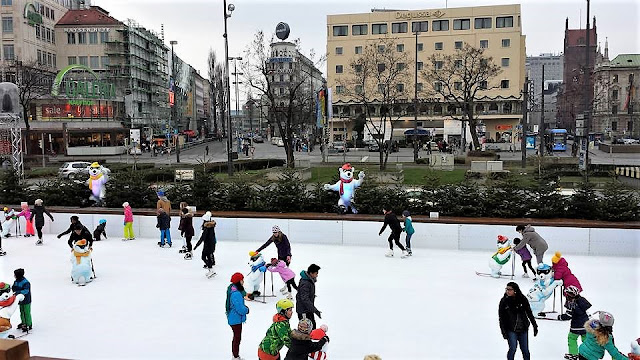 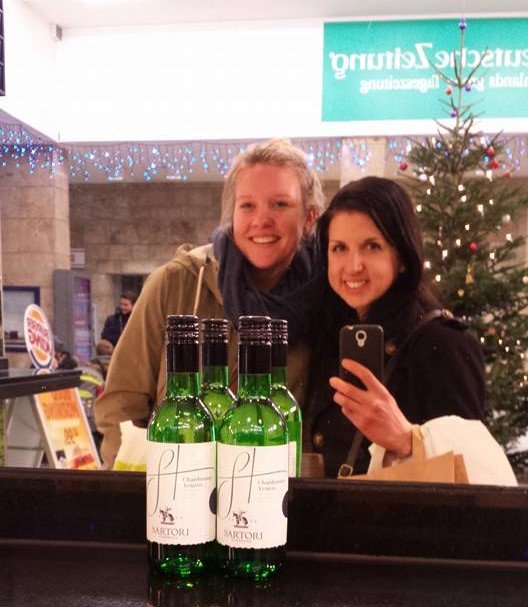 We shopped at Aldi. We met some of Kristina's friends. We accidentally spiralized cucumber instead of zucchini for dinner one night (it was much lighter and incredibly watery, but still delicious). She introduced me to interesting aspects of German culture that I wasn't taught in school, such as their recycling system (3 bins in most German kitchens), using a Thermomix, and shared her photos from Carnival. On one shopping trip, I bought my favorite tea (Apfeltee, from TeeKanne for anyone wondering....) and we bought cheap wine for a relaxing evening in. One afternoon, we saw a band playing outside, going door to door not for money but for alcohol (it was hilarious). A few of her girl friends came over and we drank an entire bottle of Bailey's-like alcohol while getting ready for a night out. The four of us went out to a club where we met a larger group of her friends, and a truly magnificent night unfolded. We drank far too much Weinschorle (wine mixed with sparkling lemon water or soda) and some sweet jam-like shots while dancing to Backstreet Boys and N*Sync. I was surprised at how much 'American Music' they listened to! There was so much dancing, so much laughing, and there may have even been poles involved at some point. We were there for what felt like hours, having a blast with her group of friends (I got to know several of them), and finally got a ride home when the lights started to come on. Once we were home, we sat at her kitchen table and split a jar of sauerkraut (it was the only thing we could find at the time that sounded remotely tasty). To this day, we'll break out the sauerkraut on a drinksy night, and may or may not have done so at our B&B on a trip to Mackinac Island together. It's weird but it's fantastic. 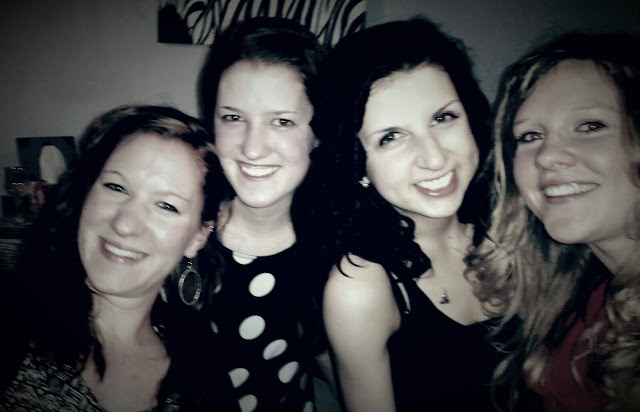 The next day she took me on a walking tour of her town, a very small village nestled in the mountains of Bavaria. The weather wasn't wonderful, but we bundled up and headed out. She pointed out her mother's bakery, the post office, and a few of her friends' houses. We saw dogs, horses, and even chickens. It was so enjoyable to walk around in the fresh air after our night of Weinschorle and dancing. I am definitely a fan of Bavaria. 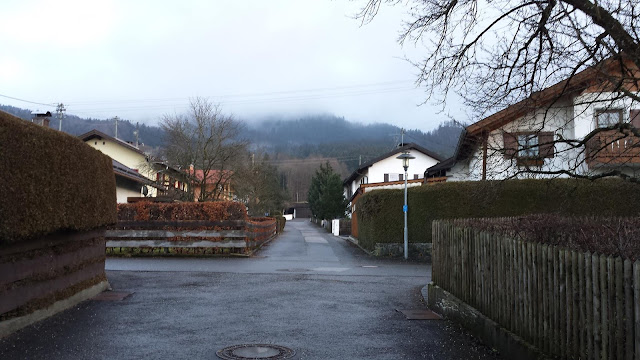 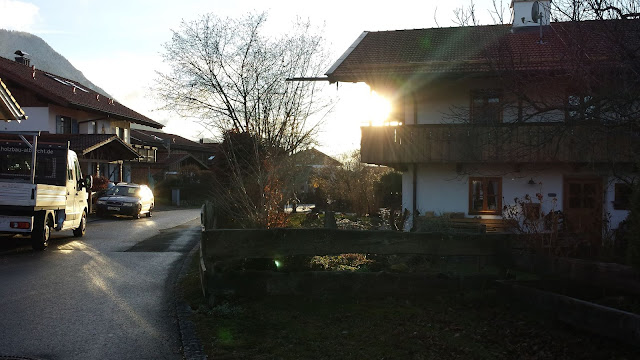 When New Years Eve finally arrived, we met her group of friends at the train station and we all huddled together in the freezing cold to wait. By this point, I felt like I knew many of them quite well, and the stories Kristina told me about each of them helped provide some background as well. One loved soccer, one loved American football (I tried to talk sports, but couldn't get very far as my knowledge is limited...), a few were childhood friends, and one was of particular interest. We piled into the train together and were soon on our way to Innsbruck. The plan was to go out for dinner, buy alcohol to take with us up the mountain, and ring in the new year in the mountains near Tirol. Once we arrived, we quickly found an Italian restaurant before heading to the lift that would take us to the mountains. Everything was passing in such a blur, and while we were freezing already before the night had even begun, we were having an amazing time. Laughing, running through the streets, laughing at the language barrier between us. Or maybe they were laughing at me because I was trying to overcome the language barrier with only 3 years of German under my belt. Regardless, I was having a blast. 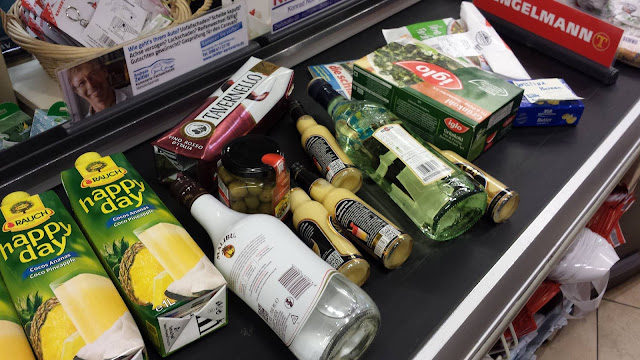 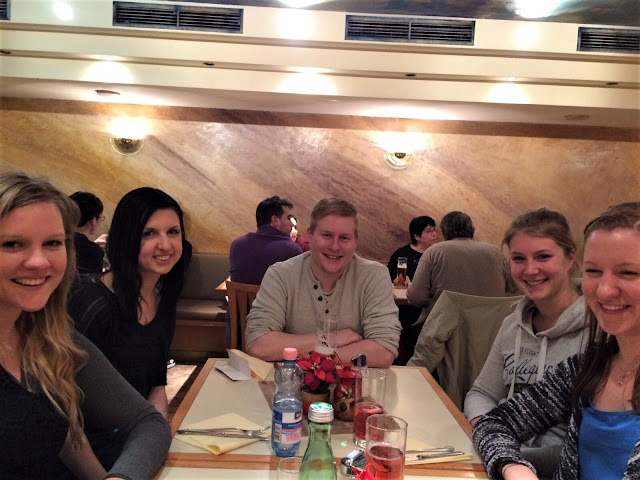 Once we were on top of the mountain, time disappeared. There was a tent with loud music, flashing lights, Gluhwein, Punsch, and beer. There were a few chairs outside and a restaurant nearby where people wearing fancy clothes were also enjoying the evening. And then, at the base of the mountain, was the beautiful city of Innsbruck lit up beautifully. We were so high up, the fireworks were beneath us, and we could see them exploding as we enjoyed warm mugs of Gluhwein, huddled together as we waited for midnight. It was the most magical evening of my entire life to that point, and despite my feet and face being completely numb, I was on cloud 9. 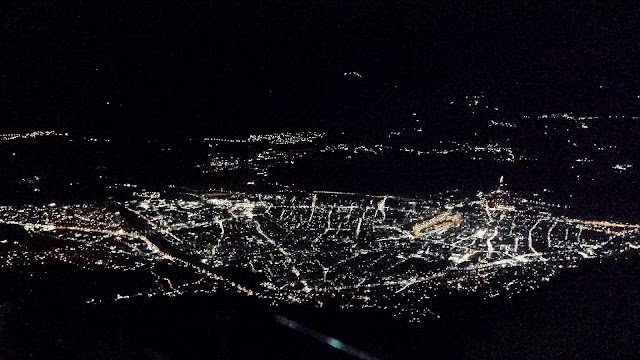 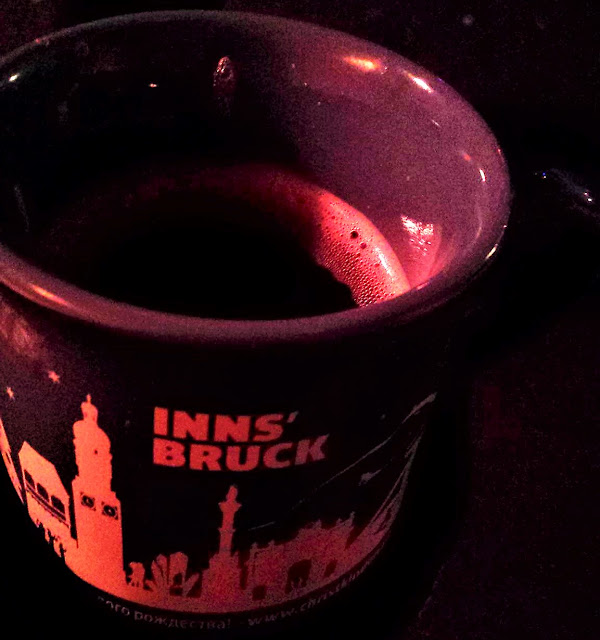 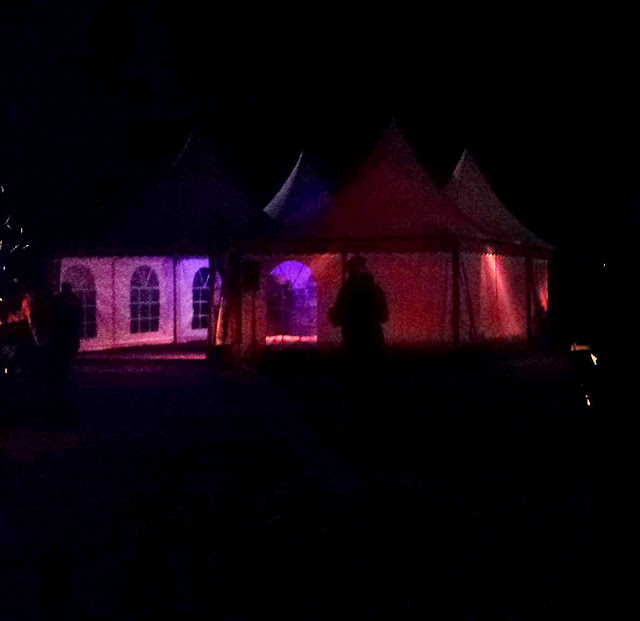 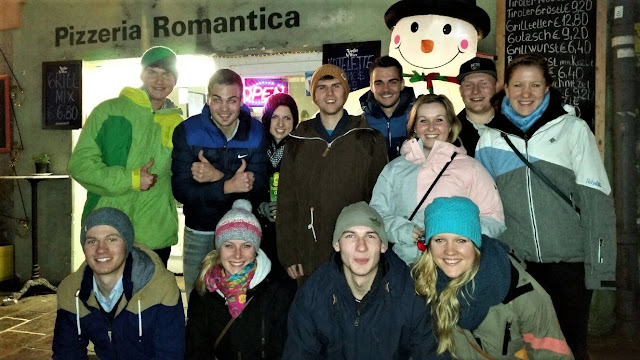 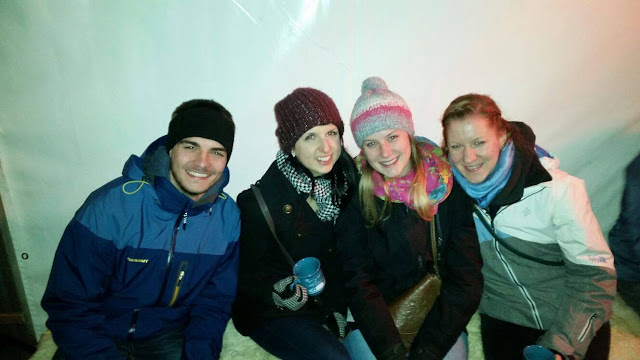 The rest of my time with Kristina flew by. The following day was rather slow as we were both nursing headaches and sore muscles from all of the dancing and shivering the night before. We had a leisurely day, including a brunch of Brötchen (bread rolls) with Himbeermarmelade (raspberry jam), Frischkäse (cream cheese), and Zimt (cinnamon). We stopped at the post office. We watched more Nicholas Sparks movies and just soaked up every minute we had together. When the time finally came for me to continue on to Austria, we cried. It was such a sad moment at the train station, hugging good-bye without really knowing when the next time was we could see each other. She felt like a sister, living an ocean away and leaving her was tough. We didn't know when we'd see each other again, but we knew it would happen one day. 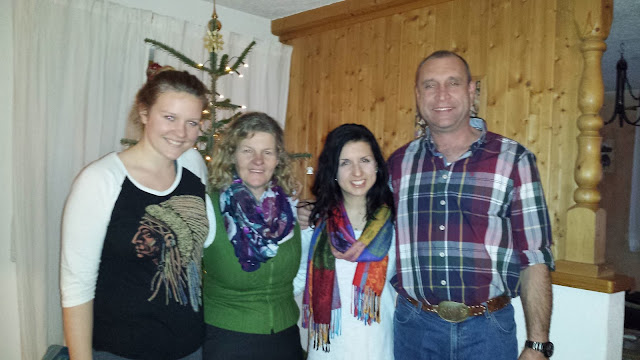 She helped me buy a ticket, and when the train arrived we hugged one last time. I was off to Munich, where I had a connecting train to Salzburg, and she was off, back to her world in Bavaria. Everything that had led up to that first week in Germany was worth it: the early hours at Target, the picked-up shifts, the late nights fine-tuning PowerPoints for my internship, the 'saying no' to going out with friends to save money. I had just had the best week of my life, and there was only more to come. The German countryside flew by outside my window, and it was only a matter of time before I'd be arriving in Austria.