Happy Monday! I'm so excited for today's post; to finally share with you something that has been in the works for months. I've been holding off on writing about it because I wanted to be sure it was going to happen. Well friends, it is. This past weekend, I started my 200 hour Yoga Teacher Training. Its going to take some time (6 months), but at the end I will have my RYT® 200 certification and can officially teach yoga.

Over the past few months, you may have noticed on my social media pages that yoga has become an increasingly important part of my life. Its something I've been doing on and off since college, coming back to the mat several times in each new 'phase'. Its come for a week, for two weeks, a public class here and there, and then leaves again. But this summer, it came back more swiftly and stronger than ever. After finding out I wasn't accepted into the Navy, I found my way back to Yoga with Adriene on Youtube (the first time was in 2015 during a summer internship). It gave me something else to focus on first thing in the morning, and helped me feel like I could dedicate my efforts to something other than waiting to hear from a recruiter. I did her 30 Days of Yoga series, researching other aspects of yoga along the way. I started learning about the history. I started researching the different types of yoga and their significance. I watched documentaries and other online yoga teachers and fell in love with it in an entirely new way. Every morning before I even had breakfast, I was on the mat for my 20-40 minute yoga session. I even started meditating after getting into Savasana. This new routine gave me an immense sense of calm after such a mentally stressful summer - Navy, no Navy, figuring out my career, preparing to move - and I couldn't get enough of it. Yoga just felt 'right' at a time when nothing else felt right, and I knew it was here to stay. 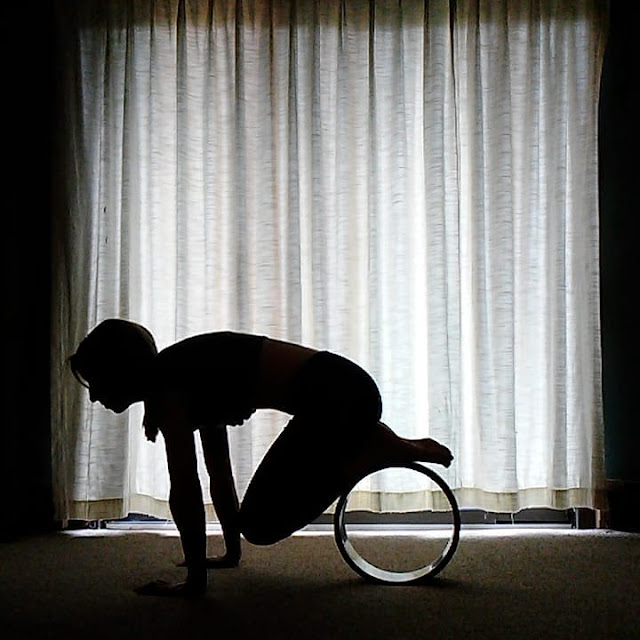 Before I officially moved, I started looking at yoga studios in the area near my new apartment. There were so many to choose from - Citizen Yoga, the Yoga Shelter, TRAP Yoga, Karma Yoga, Yoga Garden - it was overwhelming. Some offered more physically demanding classes, some offered events involving brunch or wine, but in the end I decided on a studio that offered the widest variety of classes that touched on both the physical and spiritual elements of yoga. I decided on Karma Yoga. It was less than five miles from my new apartment, had amazing reviews on every website I checked, and seemed to be everything I was looking for in a yoga studio. 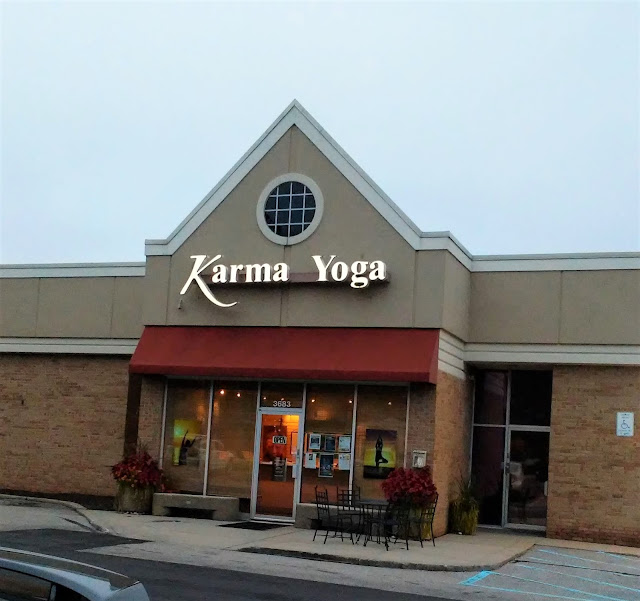 As my moving date got closer, I started doing even more yoga. I started seeking out books at the library about poses and the anatomy behind them. I bought a yoga wheel. I finished Adriene's 30 Days of Yoga series and started the next 30-day series, True. And I still needed more. One day, I was just browsing on Karma's website and there it was: the Yoga Teacher Training. It was called "Living a Fulfilled Life", and it was exactly what I was looking for. The program would cover everything from Basic and Vigorous Hatha Yoga (Basic, Slow Flow, Vinyasa) to Anatomy, from Meditation to Sound. Everything I read about it peaked my interest, and it was even a Yoga Alliance certified studio (meaning I would be able to earn the RYT® 200 certification). Before I knew it, I was emailing one of the teachers for more information. The training would start October 6, less than two months from the day I discovered it, and I knew I had to do it.

I spent the next week emailing back and forth with the teacher, discussing the program, the books, the class size, the cost, the deadlines, etc. I was glad to learn that it was spread out over six months, unlike some yoga immersions I'd seen that were one or two-week fully intensive, onsite programs. I liked the idea of having time to reflect and let everything really sink in. Class was only held on Saturdays from 11 to 4 and one Sunday a month, and major holidays were off. It would work perfectly given I work a Monday-Friday, 8-5 job. I reached out to several of my friends who I knew taught yoga to ask them for advice, insight, and support. They were 100% on board with my decision, and even checked out Karma Yoga to see for themselves what it was all about. (Hailey and Kinzie, thank you ladies!) The thought of actually teaching yoga had never really registered before, but it certainly did now. How had I never thought of that? Didn't people ask me all the time to 'teach them some yoga'? Isn't teaching the best way of mastering something? Didn't I love tutoring French? My friends even gave me suggestions of less traditional ways to teach outside of just at a studio: corporate events, nursing homes, schools, sports teams, even private lessons were all great options. And then, one day when my friend Angela and I actually went to Karma Yoga to check out the studio, an entirely new idea came to me. During Savasana, I had this overwhelming sensation of gratitude for just being alive. It was so incredible to be there, enjoying the company of such a good childhood friend while experiencing a new place that might become a huge part of my life. I just felt thankful and comfortable in that space, and it gave me an amazing idea for teaching. 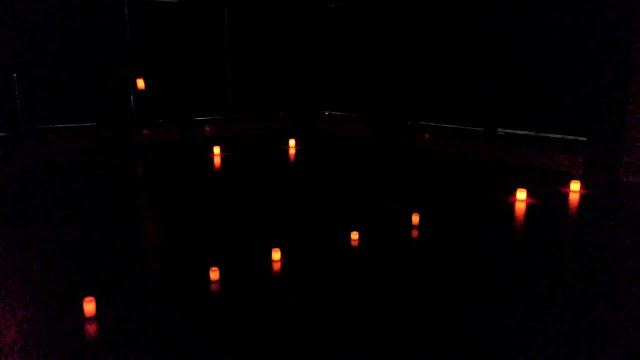 I've mentioned before on the blog that I was very sick in high school and didn't have the best experience there. Without getting into too much detail, I was severely underweight and cut myself off from everyone. I had no self-worth or self-esteem whatsoever. Had it not been for my mom (love you, mom!) I truly believe I wouldn't be here. She fought for me (by fighting with me) and somehow we overcame it together. Now, I never went to an eating disorder center but it was definitely a conversation we had in the toughest moments. It would have taken me away from my parents - the only people who cared enough about me to change my path - and I'm not sure how I would have handled it. I remember going through that time, wishing there was someone who understood why I couldn't 'just eat' to get better. I needed someone who 'got it', who I could relate to. I've often wondered Why did such an awful thing happen to me? What is the higher reason for this: the 'Big Picture' meaning? Why me and not someone else? It's been nearly ten years since I went through it, and at that moment at Karma Yoga I felt like it finally became clear. The teacher training was just the start, but it would allow me to help those struggling through what I once struggled through. Obviously I wouldn't be teaching vigorous Hatha yoga classes, but maybe a gentle flow or meditation: something to take their minds elsewhere and recognize that we are so much more than our bodies.

I had the conversation with Angela over lunch that day, after our yoga class at Karma. She thought it was a great idea, and I knew that I had to go for the training full speed ahead. Less than a week later, I had signed up, got the 'early bird' registration turned in, and started securing my texts for the class. It was official: I was going to become a yoga teacher. 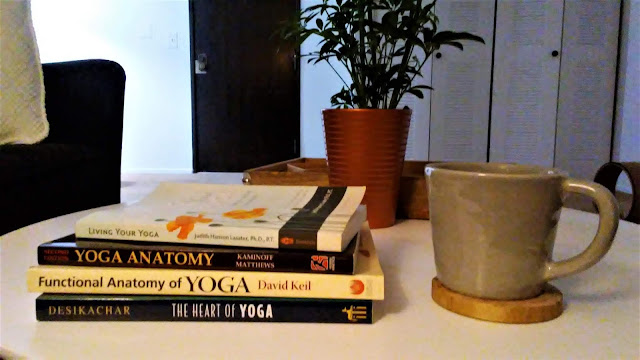 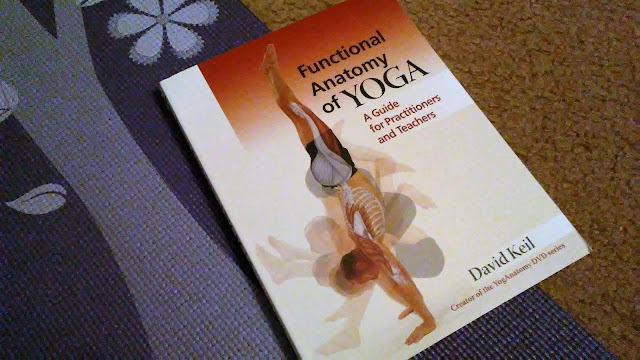 This past weekend was only the first of many that will be spent studying yoga. As I mentioned, the course is five hours long every Saturday from October to March, one Sunday per month, and holidays off. I met my classmates on Saturday and instantly felt connected to all of them. In total, there are six of us women on this journey together. We are all so different and have such varied reasons for taking the course, and yet share so many common interests and goals. It really is a neat dynamic, and I can't wait to see where it goes. Over the next six months, we'll be learning the asanas, anatomy, chakras, states of consciousness, and so much more. There are 30 required yoga classes to attend, required observations, teacher assists, book reflections, and of course our weekly lessons. At the end, we'll have earned our 200 RYT certifications and can start teaching in whichever capacity we choose. We've already gotten to know each other so well, and I'm so glad I decided to just bite the bullet and sign up. 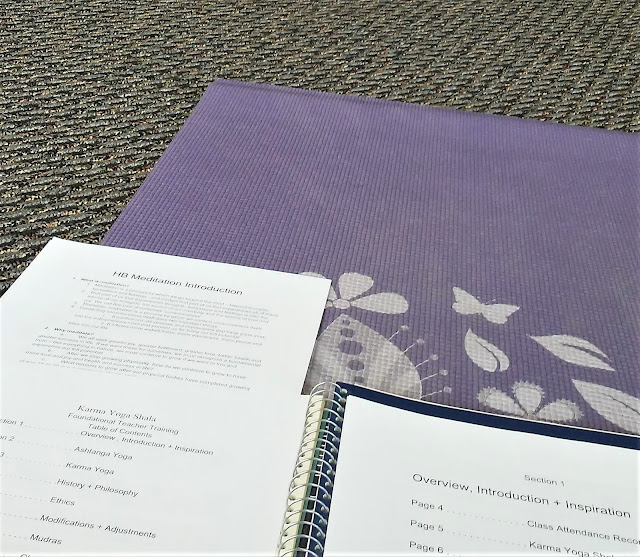 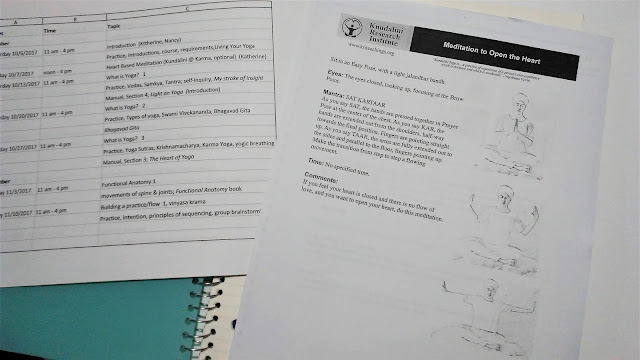 I could've waited another year. I could've waited another five years. But talking to the women in my class (all older than me), they've all said it's great that I'm starting when I am. Some even expressed they wished they'd started when they were my age. And it is so reassuring to hear. Has there been stress around signing up for a yoga immersion at the same time that I had security deposits, move-in costs, and U-haul fees to pay (not to mention my dying car)? Absolutely. But its giving me the tools (and certification) I need to truly use it in the future as a sort of 'side job'. And its so much more affordable than one of the two week or month-long teacher trainings/immersions in Bali or Thailand (which would have also been incredible to do...maybe one day!). Do I plan on quitting my 8-5 job when I have my certification? Definitely not. But I do plan to try to teach in the evenings and on the weekends whenever possible. One of my friends teaches 5 or 6 classes each week in addition to her day job...why couldn't I?

This past weekend, we had class both Saturday and Sunday. Saturday was spent doing an actual yoga practice, getting to know each other, and going over what we can expect during the next six months. And then yesterday morning we were invited to come to Karma Yoga's 15th birthday party and take a Kundalini class (my second one ever). We started learning different techniques in heart-based meditation and had some truly great conversation. Its going to be such an interesting, new experience for all of us I'm sure, but in the best way possible. Its going to be a great six months! 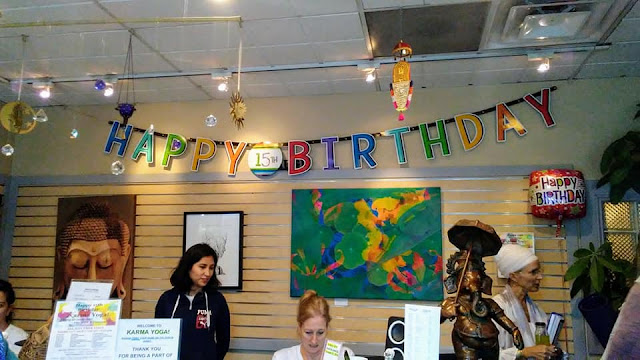 I won't be reporting back after every class during this yoga teacher training. It would just be too much to try and share everything! And there may be personal things that come up along the way (it is yoga, after all) that I just don't want to put on the internet. But I wanted to share this initial post with you because I'm so excited to get started and I know many of you reading are friends and family - of course I want to keep you updated! Whether I do end up teaching at a studio, or hosting corporate events, or doing private lessons, or finding my way to teaching at eating disorder centers...this is just the beginning. It's truly the start of a new chapter in my life, and I can't wait to see where it takes me. 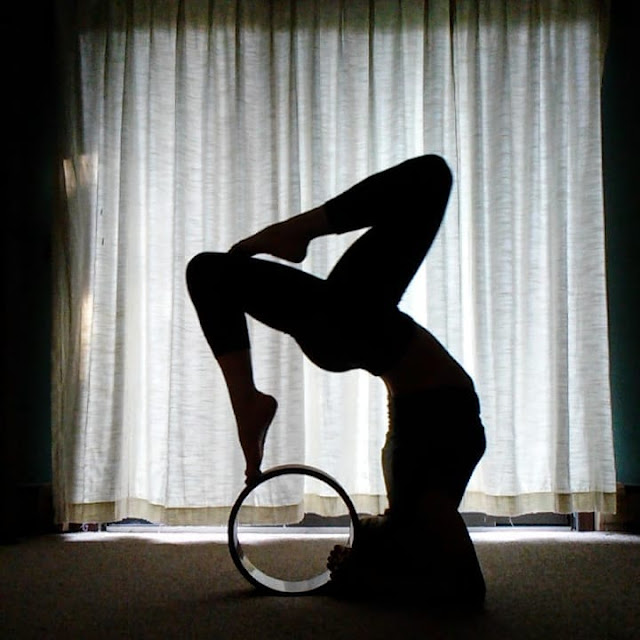