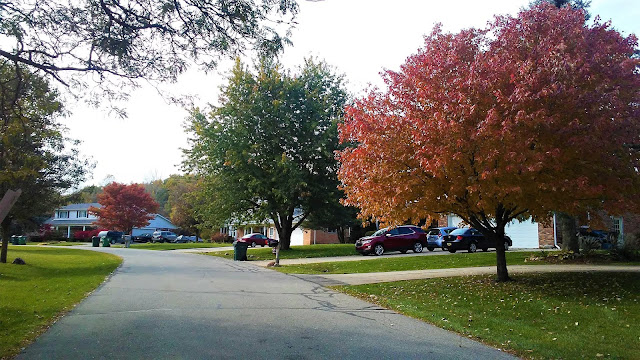 I have been back in the office for nearly two months now, and I have to say, it's going better than expected. I've loved getting back into a routine, spending so much time with my managers and coworkers in person, wearing clothes that had been sitting in my closet for over a year (and of course treating myself to a few new things, too), and just assimilating back into normal society. Morning meetings, office activities, the occasional lunch out...its exactly the change I needed and was hoping for. Of course there are things like traffic and sitting in a cube most of the day that come with working in a corporate position, but overall I'd say I'm pretty happy. I no longer have days when the only people I see are at the gym (if I go), no longer stay in my pajamas until noon, and have so much more energy than I did when I stayed home all day. Life is good.

That being said, yesterday was a Mental Health Day. Now I want to stress that I am not on the verge of a breakdown or feeling completely overwhelmed in any way (or anything that typically comes to mind when someone hears "Mental Health"). I just needed a day outside of this new norm to mentally collect myself and be with my family. Since I moved out of the UP, I've loved seeing them more often. However, the time we have is usually brief (a dinner, an evening outing) or in addition to so many other family members that you can hardly have a full conversation. Most of my family members work during the week, so it really only works to see them on the weekends (which has been cut short by the Yoga Teacher Training I'm currently going through). I don't have any regrets about the training or about working 8-5 every day, but it does make it more difficult to coordinate schedules with everyone. I had originally taken yesterday off of work because I had a dentist appointment, and when it got cancelled I decided to keep the day open. I needed it.

Because I'm programmed to wake up at 6:00am regardless of whether I'm working or not, I started the day with a short-form Ashtanga class at my yoga studio (ahh-ma-zing). Then I swung through Trader Joe's for groceries, stopped into Meijer for a few things TJ's didn't have, and headed home. It certainly felt weird to drive on the main roads without traffic, and then to come home at 10:00am (on a Thursday) just felt completely off. I watched a few Youtube videos, did my home practice of Yoga with Adriene (I'm going through her 'Revolution' series if you follow her), and admittedly did do some work from home. I spent some time writing, made lunch (zucchini, jack fruit, tofu), and headed out. My parents live roughly 45 minutes from my apartment, and I was going to stop at their house to drop off my car before walking over to my sister's (who lives in the same neighborhood) to babysit my niece. Then the plan was to walk back to my parents', help my dad finish fixing my car, and head home. 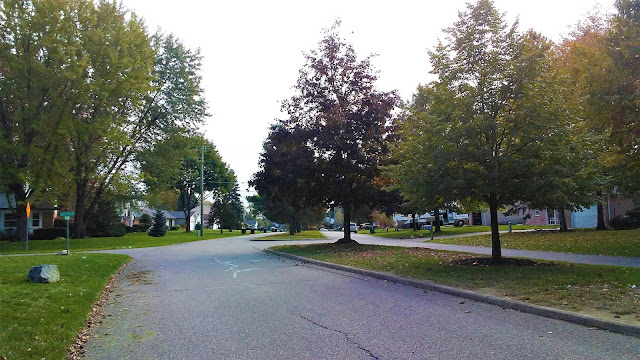 Two years ago, I was on my way to work one day when I was caught in an accident. I say "caught" because I was one of six cars involved, sideswiped and pinned to the curb by the car who caused it. Other cars were totaled, and I was lucky enough to come away with only dented passenger-side doors. Granted, they were quite badly dented to the point where it would've been $4000+ to repair, but not so badly that I couldn't drive my car. And so, as any recent college grad would do, I left them the way they were. So for the past two years, I have been driving around in Little Blue looking like this: 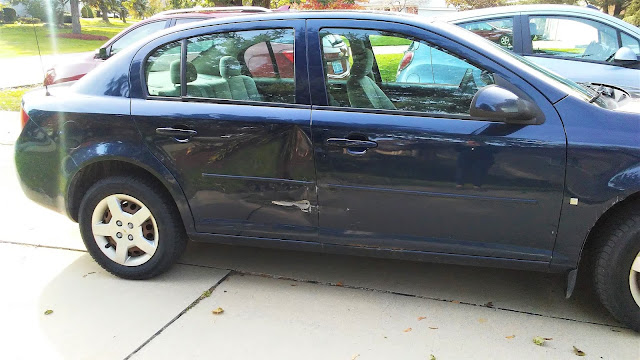 Earlier this summer, I got a very excited phone call from my brother (who loves to fix up old cars). He had been to the junk yard one day and found new doors for my car: exactly the same make, model, color, interior, etc. as Little Blue. Before I had time to respond, he sent me a picture of his purchase. My parents went to visit him in August (he lives in Missouri), and returned with my doors. They've been sitting in my parents' driveway for the past month or two, and finally they were going to be attached. It was an exciting day for everyone. 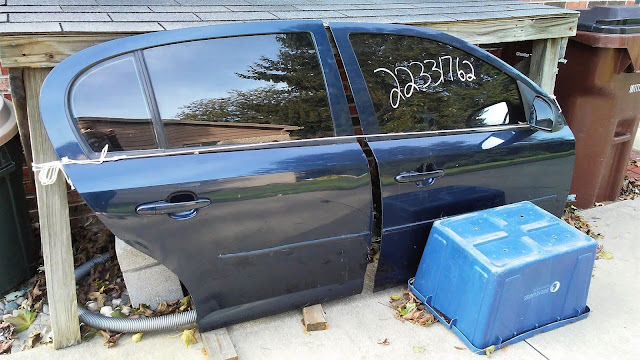 I got "home" around 2:30, when my dad said we could start putting the doors on. I didn't have to be to my sister's until 3:30, so I figured we could get a good start. He'd taken a half day at work to help me (bless him), and hadn't returned from his bike ride by the time I got there. So I hung out with Coco - the cutie below - while drinking coffee and playing the piano. This house will always feel like home. 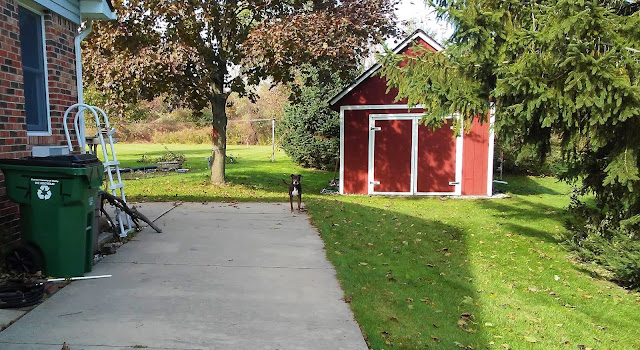 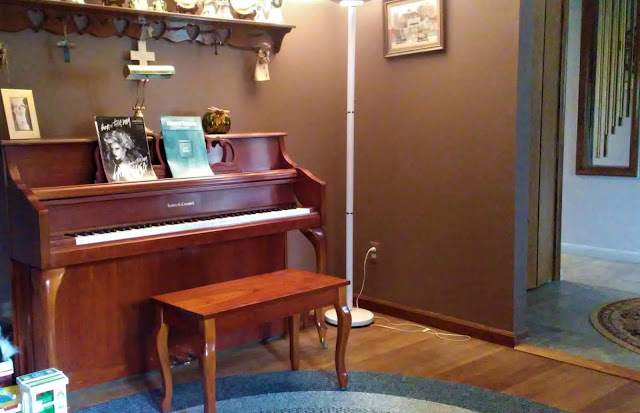 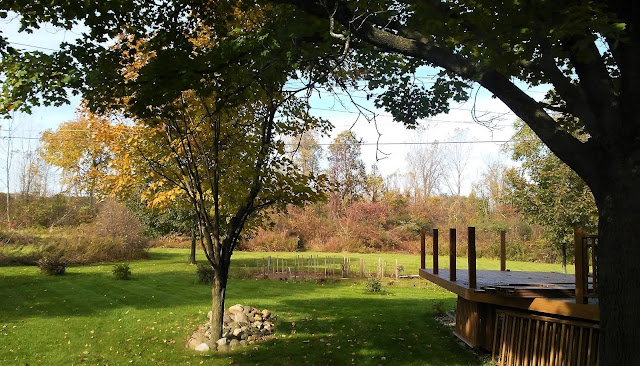 Big backyard, big garden, and half a deck (we had a pool when I was growing up)
At 3:30, he still wasn't back so I ran to my sister's house to watch my niece. She teaches piano lessons so I was just helping out by entertaining the two-year-old cutie during a lesson. We watched Minnie Mouse, played with magnetic dolls, and I even got to see her prance around in her Minnie shoes that Nana got her for her birthday. It was a very fun afternoon, and it was good to chat with my sister for awhile after the lesson. It's not often that she and I get to have 1:1 time, so I was thankful she didn't have back-to-back lessons. We just sat on the floor talking, entertaining my niece, and catching up. It was a much needed visit.

I was back to my parents' by 5:00, by which time my dad had taken the doors of my car apart and sprawled the guts all over the driveway. I was actually surprised how un-complicated the inner workings of a door are (until of course we realized the speaker on one of the new doors had been poorly replaced, and an episode of wire cutting and twisting ensued to get the one from the old doors installed). It was chilly out, but holding a heavy(ish) door steady while my dad unbolted it or bolted it back onto the car was a decent enough workout to keep me warm. We figured everything out, worked until it got dark, and I even learned about some of his early 20's escapades. There's really nothing like "working on a car" and listening to your dad tell stories from his childhood while having a few beers. It was an a wonderful evening. We eventually got everything twisted, popped, and bolted back into place, and my car was finally fixed. I didn't even notice until I left that the new doors had tinted windows (the rest of my car does not), but those are fixable too. And Little Blue is finally dent-free! 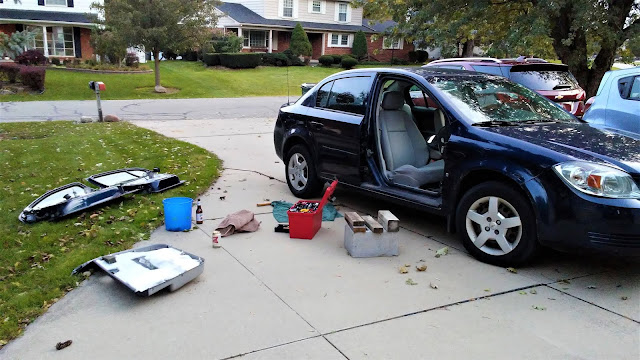 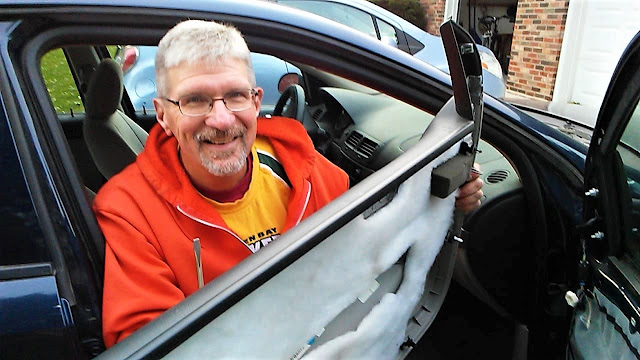 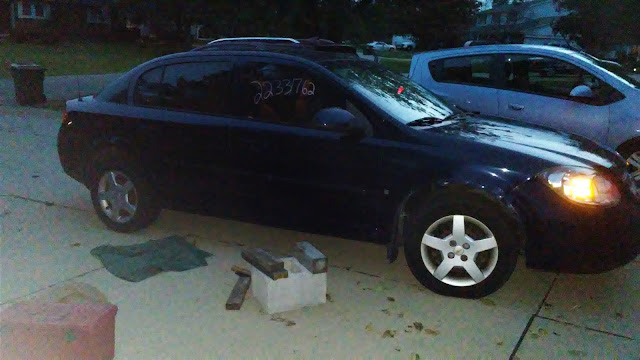 Taking care of yourself does not require some kind of mental/physical/emotional crash to be justified. I've heard far too many stories (and lived through some myself) of people pushing themselves so hard they simply break. I actually spoke with one of my friends recently who works afternoons and she completely broke down on the phone. Work wasn't stressful, it was just taking so much time away from her family time, from taking care of herself, and making time for things she actually enjoys. Her exact words were, "I feel like I'm on a treadmill and I can't turn it off." It hit home with me, knowing that I've been there in the past, never giving myself the time I needed because I thought working hard always came first. Working hard is important, of course, but I think its equally important to take care of yourself. Maybe for some its just a latte on the way to work one day or taking a walk during lunch. It could be meeting up with an old friend, going to a yoga class or working out, or even taking a trip over a long weekend. For me, it was spending a day catching up on things, writing, and spending much-needed time with my family. I felt so restored at the end of the day; ready to tackle my Friday and head into what will be a very busy weekend.

Please don't take Mental Health lightly. I don't think I can stress that enough. I know some people don't have the liberty to take an entire day for themselves, whether it be lack of PTO or chasing after kids or any other commitments, but try to at least give yourself a few hours if you can. It could even be half an hour. If you find yourself needing this time, it does not mean you're weak in any way. On the contrary, it takes a mentally strong person to admit they need that time, and then actually act on it. Burnout is real: whether its feeling sluggish and uninspired, feeling distanced from family, or completely hitting rock bottom. Take the time you need to be your best self and be kind to your body, your heart, and your mind. Talk to a friend or family member. Write it out. Whatever you might need, just give yourself the time you need without feeling guilty. You deserve it, and It truly makes a world of difference!
at October 26, 2018