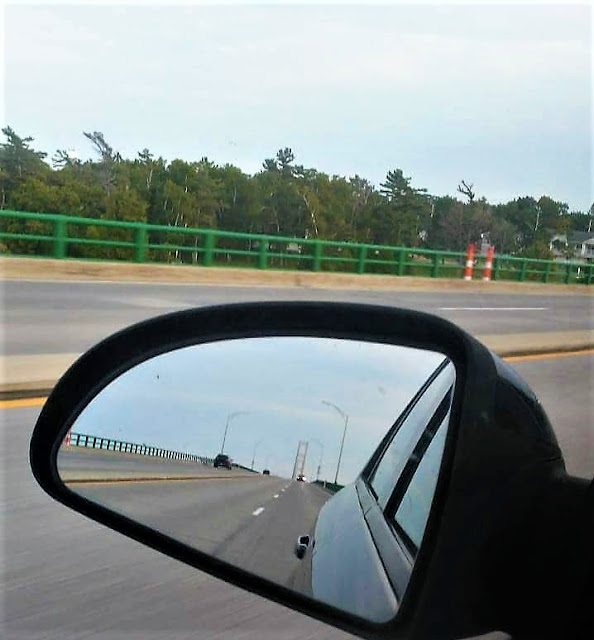 Hello readers! I know...it's been a while since my last post. Looking at my calendar today it was hard to believe its already Thursday. So much has happened in the past week, but I'm so excited to finally be sitting down and sharing it with you. As many of you know, last weekend was moving weekend. It goes without saying that this means a few days full of heavy lifting, a lot of help from friends and family, and of course, a lot of driving. I moved from Michigan's Upper Peninsula to the suburbs of Detroit and I feel like once things got started, the days just blurred together. But here I am, at my [new] kitchen table, settled in and ready to blog.

Everything began last Friday. John picked me up shortly before noon to head to the U-Haul garage, where I picked up the Beast. I didn't need the biggest one (on the contrary, I got the smallest), but compared to a Chevy Cobalt this thing was massive. I felt so weird driving it down the street as I followed John back to my apartment! Once I'd managed to park it, the remainder of the afternoon was spent hauling everything out of my old apartment. (Ladies - find yourself a man with some muscle; it makes moving 100% easier!) Thanks to him, the two of us managed to get everything out to the U-Haul - even my huge, awkward couch! It felt like quite the accomplishment and it really didn't take us that long. Before I knew it we were pulling the door down and locking it securely in place. (If I haven't mentioned before, when I moved to that apartment, my mom and I had failed to lock the U-Haul door, so when we drove out to the freeway, the door flew open and I lost a few things...it was a disaster.) Everything was good to go. And I had a few minutes for yoga... 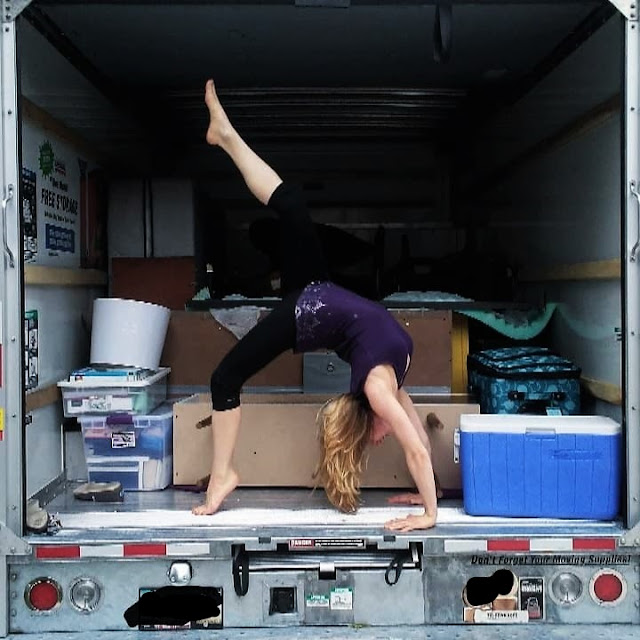 John had to work at 4:00, so I spent the evening cleaning my apartment, running a few last-minute errands, and organizing the few things I was leaving behind to pick up the following Monday (when I'd be driving back up with my parents). That night I slept on my yoga mat on the floor, still managed to fit in a 'Yoga with Adriene' session in the morning, then hopped into the U-Haul by 8:00am and was on the road. I paid the $10 fee to take the U-Haul across the Mackinac bridge (cars are only $4), and spent the remaining four hours belting out hit music on the radio. What can I say, I was excited!

I stopped for gas when I was an hour away from the apartment, and called my mom and brother to let them know when I'd arrive at the new place. I was thankful they were willing to meet me there and help unload, and soon I was signing my lease and pulling the Beast into the unloading zone. The three of us hauled everything up through the elevator (including that big, awkward couch - I would've paid to see a video of the finagling we had to do to get it to fit!). My brother left once everything was unloaded (with a few pieces of furniture I was getting rid of), and my mom came with me to return the U-Haul. Then it was off to the store for some cleaning supplies and a bottle of wine, and the rest of the evening was spent cleaning, organizing, having a glass or two, and building my kitchen table and chairs. My mom is seriously the best. 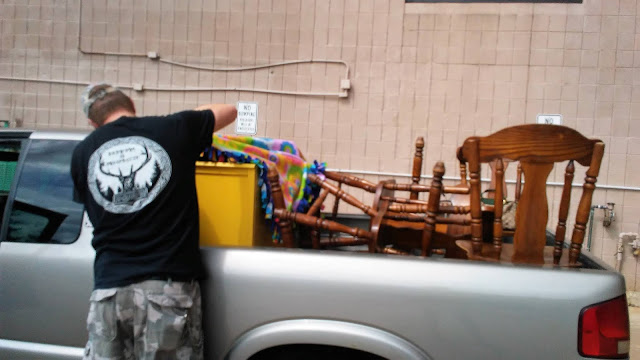 I stayed at my parents' house that night (since my car was still at my old apartment complex), and enjoyed a lazy Sunday with them. We ran a few errands before the bbq my mom was hosting for our family, and before long my sister, her husband, my nearly 2-year-old niece, brother, his wife, and their two boys (2 years and 5 months) were on their way over. It was such a fun evening. I've missed spending time with my nieces and nephews - they're getting too big too fast! I'm definitely looking forward to being back in the area to see them more often and spend more time with my family.

Of all the days during my move-in weekend, Monday was the most hectic. After lunch, my parents and I climbed into their car and drove the 4 hours north, back over the bridge, and to my old apartment. This was their "yearly trip to Mackinac" weekend, so it worked out for me to tag along to get my car. Before I left, we went out to dinner with John and his parents at one of our favorite restaurants in town. Zucchini marinara for me (one of two vegan options on the menu), and a Sugar Shack Burger for John, and of course some good conversation with our parents. Once we'd all eaten, John and I snuck out to walk the boardwalk, out to the lighthouse, just enjoying the summer weather and the view. It was so nice to have a minute alone before heading back to the restaurant, acknowledging the fact that it might be a few weeks before we'd see each other again. (For those who don't know, John and I met in St. Ignace and have been [mostly] together since last October. Maybe a story for another day!) Despite no longer living in the same town, it was comforting to know this wouldn't be 'good-bye', just 'see you later'. (Even the French say "Au revoir" and not nearly as often, "Adieu"!). And with letters and cell phones and Skype, we're staying as optimistic as possible. John's pretty great, you guys. 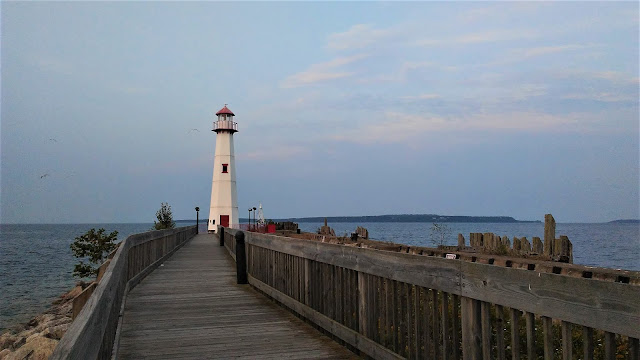 I'd be lying if I said it wasn't hard to leave once we'd walked back to the restaurant. I think everyone - even our parents - were a little emotional as we hugged goodbye. But fortunately we know we'll visit each other and have our hopes set high on the future. My parents and I pulled out of the parking lot, and before I knew it I was loading the last few things into my little car. (I didn't trust my Starbucks mug collection in the U-Haul). My parents were staying at my apartment that night before heading to the Island in the morning, and I was heading down to my new 'home'. It was around 7:30pm when I finally crossed the bridge. John had given me an amazing mixed CD to listen to on the way down (including all of our favorite songs), and the drive actually went by pretty quickly. I was home before midnight.

I was an absolute zombie the next day, but between going to Secretary of State to change my address, dropping off my old modem/router at the UPS store, and doing some grocery shopping, it flew by. At some point I realized I left my hair dryer at the old apartment complex, so when a friend came over to go out to dinner I was embarrassed that I had to go au natural and be seen in public with wet hair. (Not a good look, especially on me). We found a vegan beer hall near my apartment, and as we hadn't seen each other in over three years, it was great to just spend some time catching up. She had been a fellow intern during the summer I spent in Portland, Oregon, and was in town visiting friends and working. We had vegan burgers, buffalo cauliflower, great beer, and even better conversation. It was the perfect way to end the weekend. 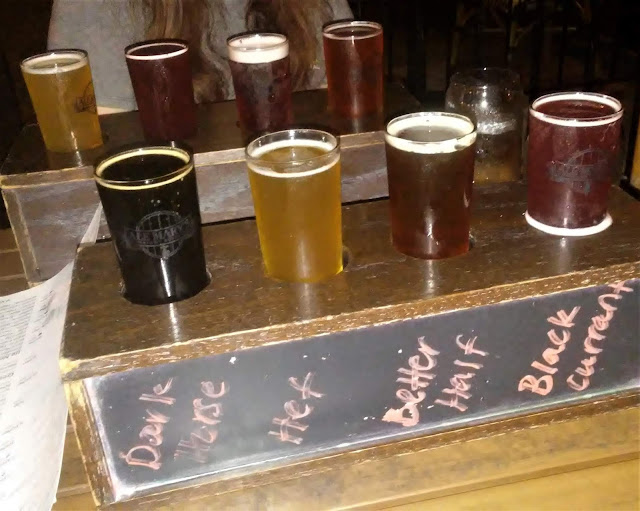 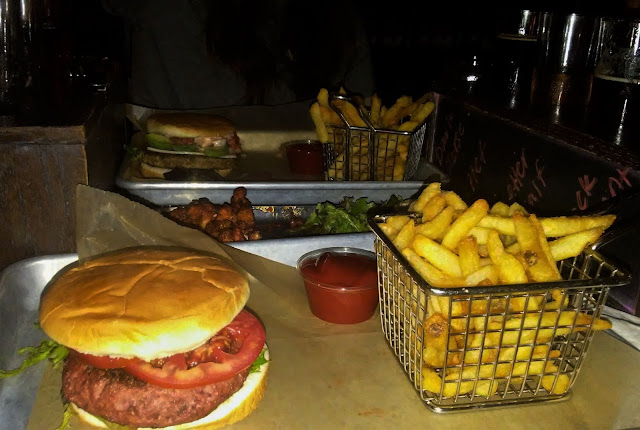 "Ale Mary's" Beer Hall in Royal Oak - I would go back in a heartbeat for these vegan burgers!
The rest of this week has gone by just as quickly. Yesterday was my first day back in the office, and it felt like the first day back to school. New outfit, new desk, new office layout...and yet it all felt so familiar and comfortable. Its been great spending the last two days with my coworkers in-person rather than just pinging them whenever we needed to chat. Plus its fun getting to dress up every day and actually wearing normal clothes (I'm told this will get old, but I'm fully enjoying it for now). 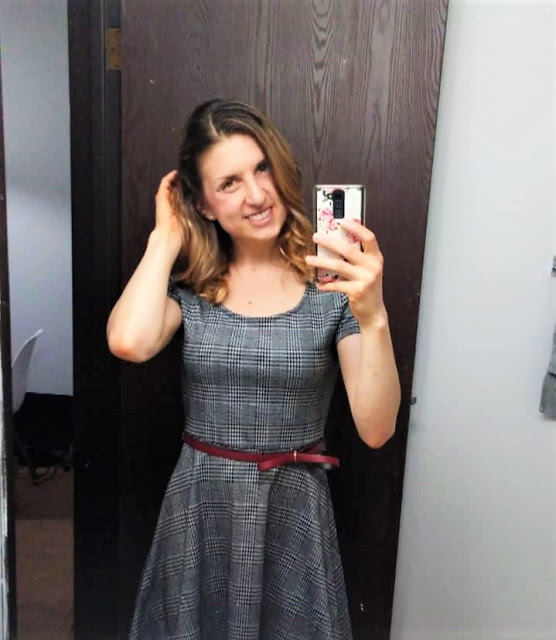 This weekend will be my second (and possibly third) class at the yoga studio I joined here, a small get-together for my family to see my new apartment, and just giving myself more time to get settled into my new 'home'. Its coming together: plants from Trader Joe's, new dishes, kitchen table and chairs put together. But there are still a few more things I'd like to add (even as a minimalist). As soon as everything is together and 'in place', I will definitely be sharing an apartment tour with you!

It feels good to be here. And I'm sure after another few weeks, it will truly start to feel like home. Its definitely different than the Upper Peninsula, but in the very best way possible. Even though John and some of my very close friends are still up north, I'm happy to be  out of the woods and settling into a new town (and the 10 minute commute to work is absolutely fantastic!). Anyway...I hope you're all having a great week, friends. Let me know in the comments below if there is anything you'd recommend doing after a move to get settled in/feel more at home/get to know your new town/etc.. I'd love to hear!
at September 06, 2018