Clarification! and an Autumn Stew Recipe.

Happy Sunday everyone! I hope you've had a great weekend. Mine has been very busy with running errands, visiting family, doing yoga, and of course enjoying lots of yummy food. We celebrated my cousins' birthdays on Saturday and it was the first time I've seen many of them in a few years. (Living in the UP didn't exactly make it easy or convenient to come to family functions over the past 16 months.) So sitting around the table with them, catching up while munching on snacks and drinking wine, was wonderful. And it was sort of eye-opening. You don't realize how much actually changes over time (in both my life and theirs) until you really start to chat. I bring this up because many of them didn't know I was vegan. They knew (I think?) that I was vegetarian, and have been vegan in the past, but I don't assume everyone reads my blog, so really how would they know, with me not having been at any family functions recently? I was thankful that there were some vegan snack options - carrots, celery, pita chips, hummus, nuts, fruit - and of course I had taken a snack to share just in case. But I was offered cheese. I was offered ham/cheese/pickle roll-ups. I was asked what kind of crust I wanted for the veggie pizza. (My family is incredibly kind, but I just don't think people in general understand what 'vegan' actually means.) I've learned to just politely decline and say thank-you anyway. If you're vegan, you probably understand. It seriously is nothing against anyone in your family or friend group: it's a complicated thing to understand if you aren't living the lifestyle! 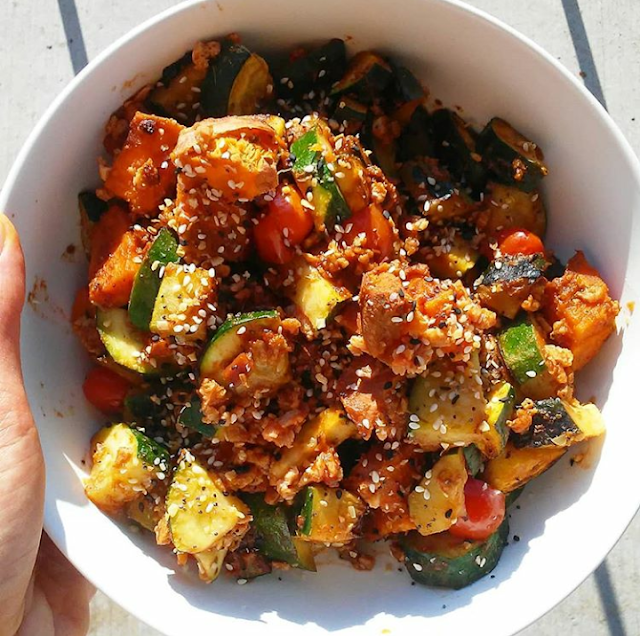 (A variation of the stew - this one with tomatoes instead of cauliflower!)

So just to clarify; vegan and vegetarian are two completely different things:
Vegan: No animal products whatsoever. No meat, of course (including fish!), but also no dairy (cheese, milk, yogurt, eggs/egg whites, whey/casein protein, powdered milk, cream cheese, etc.) or honey. No animal products in make-up/bath & body products.*
Vegetarian: No meat. Some vegetarians still eat fish, but I preferred not to when I was still vegetarian. They may choose to eat eggs, dairy, whey/casein protein, etc. Honey is fine. Makeup/bath & body products aren't always 'vegan'.

*In my experience (and again, this is just me personally, not wanting to stir the pot), vegetarianism is usually seen as more of a 'diet'. Vegan is more of an all-encompassing lifestyle, because it extends beyond food with an emphasis on avoiding animal products in all things. For example, I won't buy drugstore makeup brands because many ingredients are derived from animals and most still test on animals. I use Pacifica makeup and perfume (both animal product-free and cruelty-free, but that's another post for another day) and I don't wear real leather. Again, this is just my observation.

Having been vegan once before, the transition was very easy for me this time. But to those who don't know much about veganism, it can be confusing trying to understand why someone who's vegan won't eat something. For example, certain snacks have animal by-products even if they aren't obvious. Wheat Thins have powdered skim milk in them. Doritos have cheese cultures. Some pretzels have honey in them. Cake and sweets often have eggs, milk, or butter in them. Some sauces have fish paste or powdered milk in them. Even many tomato or gourd-based soups contain milk. (I'm currently bummed about Trader Joe's pumpkin soup having milk in it...boo!) When my family asked me what crust I wanted for the veggie pizza this weekend, I told them up front I probably wouldn't have any - I've tried just pulling the cheese off pizza before, and you guys, it's a headache. And its messy. And it probably makes everyone around you really uncomfortable. They did have salad (I did pick out the cheese for that) and fruit, so it was a light but filling dinner. Sometimes it's easier to just politely decline rather than launch into a full-blown explanation of why you won't eat something. I'm actually planning to do a post soon about how to stick to your way of life (whether its vegan, keto, paleo, gluten-free, etc.) around family and friends who don't follow that lifestyle, and still enjoy get-togethers/outings without feeling awkward. You should never avoid a situation - especially involving the people you love - just because of the food! I spent an entire weekend with my lovely friend Angela, who's keto! A keto and a vegan - and you know what? We had a pretty darn awesome time together.

So today's post is going to be one of my favorite recipes, just to show how easy (and delicious) it can be to cook yummy, fully vegan food. We don't just eat raw veggies and salads!!! Because it's been awhile since my last recipe post, I've decided to share one that is very versatile. (If you do eat meat, for example, you could substitute the TVP for chicken or ground beef.) I make this recipe almost every day for dinner (definitely on a kick right now), and when I don't it's usually only due to lack of ingredients. You could call it a sauté; you could call it a stew. Whatever you call it, it's a perfect dish for autumn, very easy to make and take for lunch, and of course is packed with nutrients. Let's get right into it! 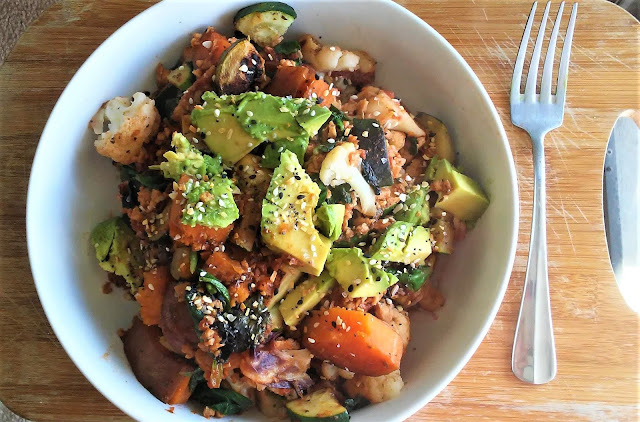 Directions:
1. Chop the cauliflower and sweet potato, and cook until soft. I would have preferred to roast mine, but due to a non-functioning oven (praying for a replacement soon!) I had to boil mine. It tasted just fine. Have this prepared prior to continuing with the next steps. 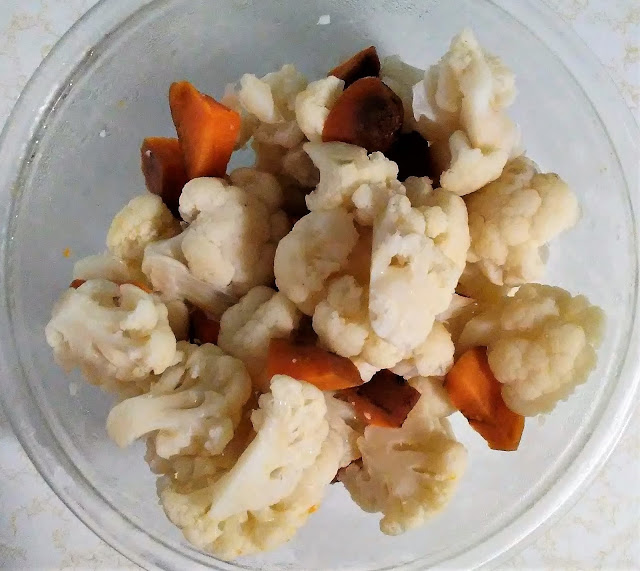 2. Chop the zucchini, then add to a frying pan (I coated mine in cooking spray, but you can use oil). Add the garlic and cook until soft.
3. Meanwhile in a small saucepan, bring the vegetable stock to a simmer.
4. Once the stock is simmering, add the TVP flakes, cumin, and paprika. Stir gently, allowing it to soak up all of the vegetable stock. This will happen fairly quickly. 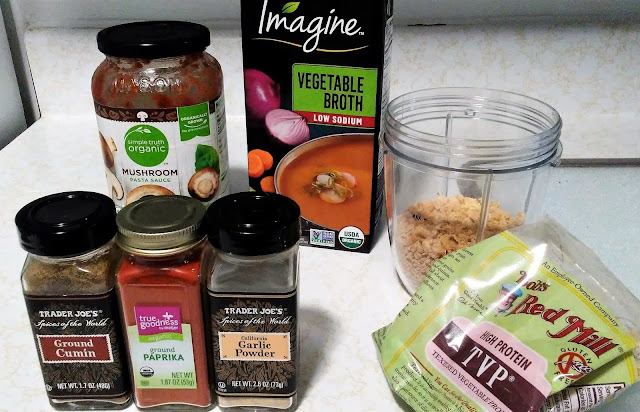 5. While the TVP cooks, add the cooked sweet potato and cauliflower to the zucchini and add any additional spices you'd like (I usually give it another few shakes of garlic, personal preference).
6. Add the pasta sauce to the TVP and stir until everything is evenly absorbed. It should be the consistency of ground turkey.
7. Add the contents of the TVP saucepan to the zucchini/cauliflower/sweet potato mixture. If you chose to add spinach, chop and add in now. Cover and let cook for 4-5 minutes.
8. That's it! Transfer from the frying pan to a large plate/bowl and add the avocado, Trader Joe's seasoning, and nutritional yeast.
9. Enjoy! This recipe serves one but you can easily double/triple/etc. the recipe to accommodate more, or to make extra to freeze.

I hope this post was helpful in clarifying some of the differences between veganism and vegetarianism. I know there are so many lifestyles out there and to those who don't follow any one specific kind, it can be really confusing to keep them straight! If you're interested in learning more about being vegan, feel free to reach out or check out my post on being vegan. Let me know if you give my stew a try, and feel free to leave a comment below with any suggestions/additions you might have!
at September 16, 2018