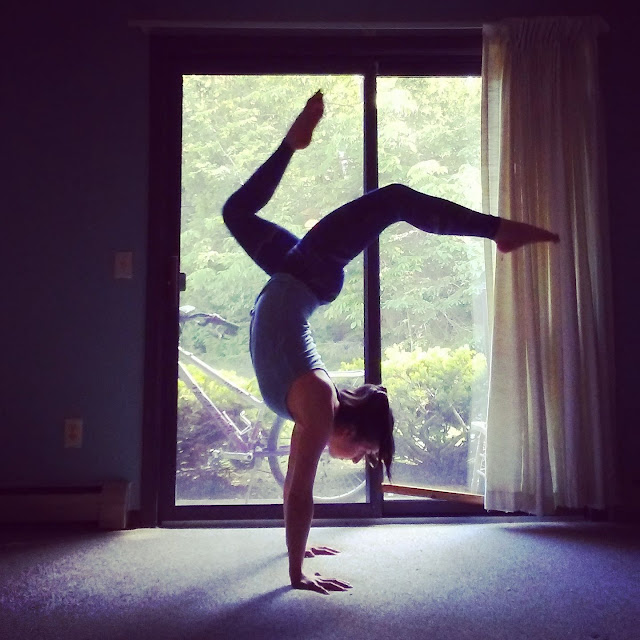 Yoga: it's been around for centuries and is proven to have all sorts of physical and mental benefits. Nearly every gym, university, and community center now offers yoga classes, and there are even video series online dedicated to making it do-able for even the least flexible people. So why don't more people do it?

My own 'yoga journey', if you will, started about three years ago, when I was in college. I was getting bored with just doing Insanity videos in my dorm room and I wasn't quite into lifting yet, so I was searching for some way to be active that didn't require venturing off campus. I noticed a class schedule posted at the gym, and among a slew of spin classes, barre workouts, and Zumba classes (all of which I did try once or twice), there were yoga classes three days a week. Conveniently, it worked with my class schedule so I decided to sign up. I was going to be a yogi.

As if signing up for a class officially welcomed me into the yoga community, I did what any college student trying to fit in would do: before even attending my first class, I went online and bought a yoga mat, yoga mat carrying bag, yoga socks (you know, those grippy things that make your feet sweat?), and a yoga towel. No one was going to question my abilities. My first day of class arrived, and if I'm being honest it was possibly the most embarrassing day of my college career. I was in a hot room full of lanky, tattoo'd college students, half of whom had highlighter-colored hair, and didn't have the first clue what the teacher was talking about. As we moved through the flows (whatever that was supposed to mean), I was constantly messing up: right foot instead of left, facing the wrong side of the room while everyone else seemed to be in perfect unison, slipping off the side of my mat (like I said, it was hot!), and tipping over at least three times during chair pose. It was the least enjoyable thing I had ever done, and at the end I didn't even feel like I'd gotten a good workout.

I went to a few more classes, spent some time in between researching what the poses were supposed to look like, and started feeling marginally better as the end of the semester approached. (If it had been a graded class, I would have passed. Maybe not with an A, or even a B, but I definitely would have passed.) That summer, I did an internship in Portland, Oregon, where I met a few friends that told me about Yoga with Adriene. Adriene is a Youtuber who has dedicated her channel to sharing all kinds of instructional yoga videos, including a 30-day challenge. She changed my understanding of yoga from just being a series of poses to a 'flow': a sophisticated orchestra of motions that lead into each other, connecting your mind with your body. That summer, I went through the challenge, doing yoga before work, and starting to research things like the 'third eye' and 'crown'. I discovered the meaning of chakras and met more people in the community who were into yoga as well. I even met a group of people who did something called Acro-yoga and spent the rest of the summer getting flipped, twirled, and twisted atop the feet of my yogi friends. It was incredible (and I would go back in a heartbeat)! 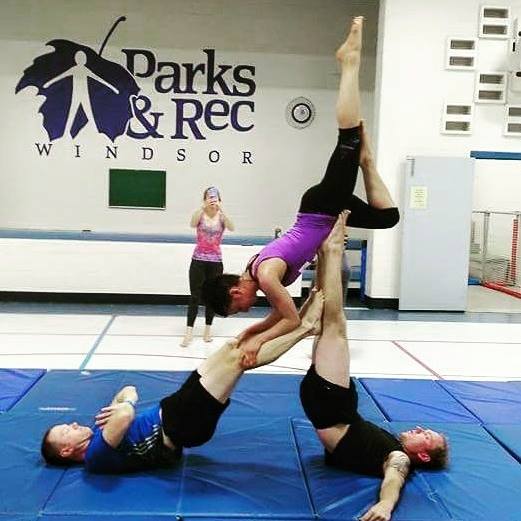 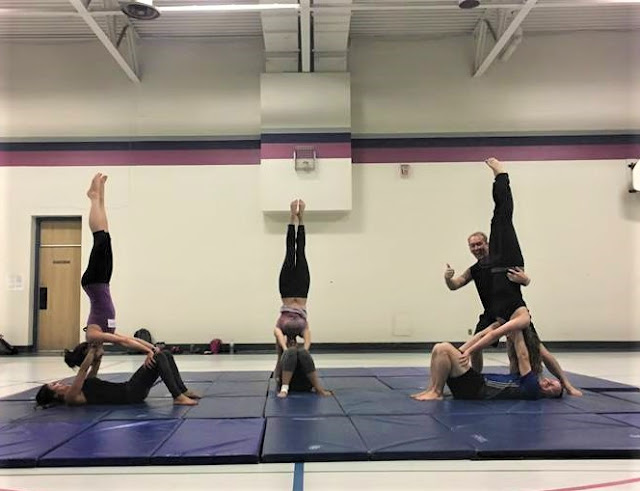 So when I did come back to the Midwest, graduate from college, and leave the university, I felt a bit lost. Yoga classes at local gyms were $25 each, and there was no way that I could afford to go three times a week on my Retail Associate/Barista income. No one in the area practiced Acro-yoga, and I couldn't seem to find anyone who even did just regular yoga. Without any other options, I decided to do the only thing I could think of that would get me a free gym membership (meaning free yoga classes): I got a [short-term] job at Lifetime Fitness.

The yoga classes at Lifetime were nothing like they'd been at my university. The rooms were packed full of all kinds of people, from soccer moms and high school students to college jocks and people who had clearly been born doing yoga. A few of my coworkers and I went to classes, sometimes working out together before or after, and I loved that I could get 'a good flow' in as I had in Portland. I mastered the poses, even (finally!) being able to touch my heels to the floor in downward dog. It was so great to have found a new yoga community. Then one day I met some individuals at the gym who were into Acro-yoga, and went with them to Windsor, Canada for my first Aerial Silks class. It was fantastic! 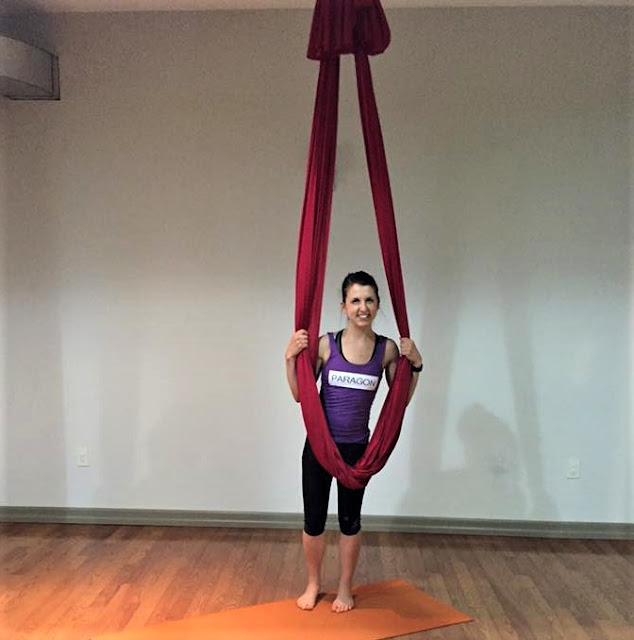 When I left the gym to pursue a more corporate career, my yoga journey came to a screeching halt. I no longer had free access to classes, and since my Acro-yogi friends and I hadn't had the chance to grow very close, we lost contact. I tried to keep up with yoga at my apartment, but it wasn't the same as being in a class with an instructor, meditation music and candles, the whole shebang. And then I moved to the very northern part of Michigan, where yoga barely exists and there isn't a studio within 100 miles. Yeah...yoga has taken a seat on the backburner.

So last night, I decided things were going to change. I rolled out my yoga mat so I would have no excuse this morning, and decided to reconnect with my old passion. With all of the change and getting ready to move and other things going on in my life, I had a lot of ups and downs over this past week culminating in one big, stressful weekend. And while my upstairs neighbor vacuuming at 6:00am this morning was a less-than-perfect way to start a Monday, it helped me to get out of bed, come to the mat, and just start. I'm re-visiting Yoga with Adriene and going through her 30-day series again, and am planning to join a yoga studio when I move in a few weeks. This morning's session was wonderful, and at the end I no longer felt all of the stress from the past week. Yes, there are still things on my mind, but its a great feeling to have a fresh mindset heading into a new week! I am looking forward to continuing with Adriene and kick-starting my yoga journey once more. 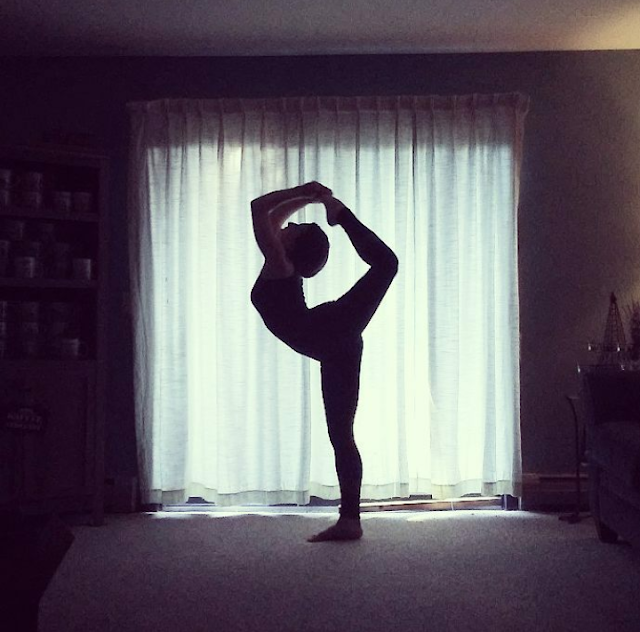 I know many of you are into yoga and would love to hear what you do to keep up with your practice/routine. What's your journey been like? Let me know in the comments down below...
Namaste!
at August 06, 2018